On Oct. 30, the Cyclones kick off the season with $1 beer, pizza, hot dogs and soda as they take on the Indy Fuel at Heritage Bank Center. 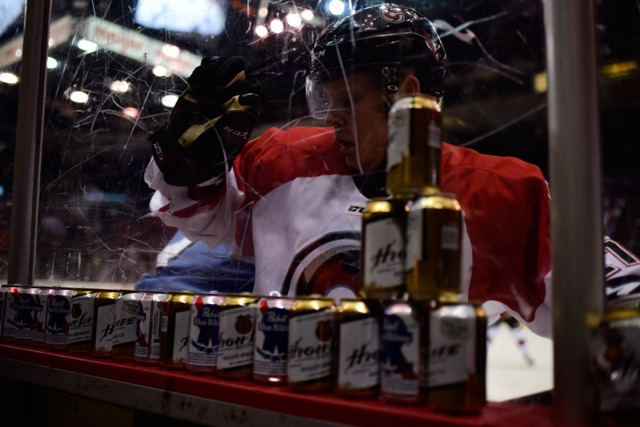 Nothing says autumn like cheering for the home hockey team while buzzed on delicious, cheap beer.

Last week, the Cincinnati Cyclones released its promotional schedule for the 2021-2022 season. And while CityBeat loves giveaways and character appearances as much as anybody, there's one thing that really makes our heart thump about hockey season.

Did you hear us? Dollar beers!

The team is bringing back Cincinnati's best way to imbibe, beginning with the home opener on Oct. 30. The Cyclones will take on the Indy (Indianapolis) Fuel at Heritage Bank Center and will feature $1 beer, pizza, hot dogs and soda. It will be the Cyclones’ first game in about a year and a half, as the coronavirus pandemic canceled the end of the 2019-2020 season and the Cyclones opted out of the 2020-2021 season.

Can't make the home opener? There will be other chances to score cheap alcohol, including at least 12 other $1 beer nights and several $1 concession games.

If you'd rather have entertainment and keepsakes instead of beer, the Cyclones will cover that, too. Throughout the season, fans can load up on team playing cards, holiday socks, T-shirts, beach towels and bobbleheads. There also will be games with indoor fireworks, wiener dog races, Marvel and DC comics characters and more.

On Aug. 31, the Cincinnati Cyclones announced Jayson Payne as the team's new head coach. Payne, who had played for 14 seasons and amassed 1,825 penalty minutes, had been the Cyclones' assistant coach until former head coach Matt Thomas departed for the Providence Bruins, the Boston Bruins' main development team.

Find the full season schedule and promotional items on the Cincinnati Cyclones website.