We chatted with contestant Ryan Wenstrup-Moore about what the experience was like including how she chose her outfit, how she practiced and how Alex Trebek was doing 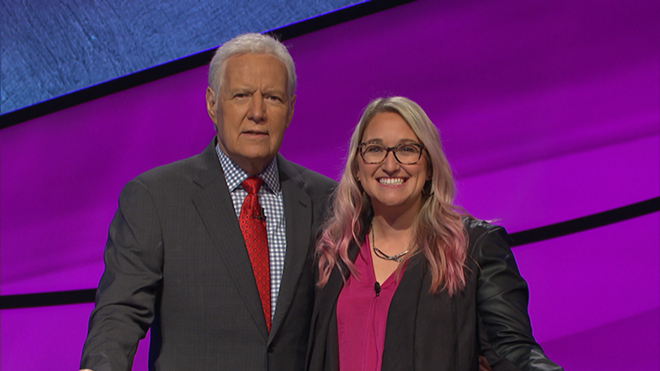 Cincinnati native Ryan Wenstrup-Moore will flex her trivia knowledge — and show off her ability to answer in the form of a question — on popular game show Jeopardy! this week. Her episode airs at 7:30 p.m. Jan. 29 on Fox 19.

Raised in Terrace Park and currently living in Mount Lookout, Wenstrup-Moore has been a longtime follower of the show.

"I have always been a fan for as long as I can remember," she said in an email interview. "I auditioned after college — before the test went online — and passed the test, but moved to Scotland a few weeks after, so this was a dream of mine for a very long time."

Wenstrup-Moore works as the associate director of social media for Cincinnati-based B2B marketing and advertising agency, gyro. She had an in-person interview with the Jeopardy! team back in the fall of 2018, and they filmed the episode just before Thanksgiving 2019, giving her a 13-month span between her audition and when she was actually told she would be on the show.

We asked Wenstrup-Moore a few questions about what it was like to be on the show and how she prepared.

CityBeat: What did you think of the experience of being on Jeopardy!?

Ryan Wenstrup-Moore: It was a total whirlwind, but an amazing experience. I am so glad I was able to go on while Alex was still hosting. It is a lot different being on that stage than shouting out answers from your couch.

CB: How did you decide how to sign your name (on the contestant podium screen)?

RWM: I honestly can't tell you if I wrote in cursive or print! They did say no personal messages, but I may have slipped something in...You'll have to watch to see!

CB: How did Trebek seem, health-wise/spirit-wise?

RWM: I expected him to seem sick, but he looked well and was honestly so generous and kind. At every commercial break (the game is filmed in real time) he would get up from his podium, walk to the edge of the stage and take questions from the audience. He came across very humble had a great sense of humor, fielding some very random questions.

CB: Did you practice at home prior to the filming?

RWM: I watched a lot of Jeopardy!, a lot. I had less than a month's notice from my call to my filming, but I watched every single episode of Jeopardy! available on Hulu and then moved on to the Netflix episodes. I read as much presidential trivia as possible and wrote down facts I thought could come up. I particularly liked this cheat sheet article for identifying painters.

CB: How did you decide what to wear?

RWM: OK, so that was honestly my biggest worry! I went to Benefit Salon to see Angeline to get my hair done and Leah at Studio L for my brows before I left but had no idea what to wear! A very kind friend, Karen Brown, lent me some necklaces and I packed a random mish-mosh in my bag (you have to bring a minimum of four outfits) but didn't know what I was going to wear! My mom lives in Los Angeles, so when I arrived she and I went shopping. I found a suede and leather-look jacket I loved at T.J. Maxx and we found the fuchsia top for a pop of color at Macy's and I paired that with black leather-look side panel leggings (no jeans allowed) and black booties I knew would be super comfortable to stand in, but cute. Tortoise shell was super in and hoops are my thing, so I got some Ralph Lauren tortoise shell hoops and an amethyst wrap bracelet (known for calming nerves) to accessorize with my friend's necklace. Serendipitously, when we got home, I noticed the amethyst bracelet had a charm that said "wisdom" on it! I took that as a sign. Similarly, I ended up with the color "Can't be Beet" for my pedicure — seemed like another sign. My biggest worry was what to wear but somehow I managed to find it all less than 48 hours from filming.