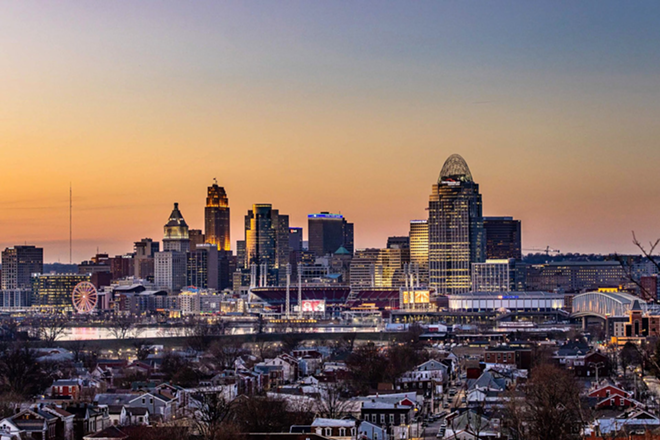 The Queen City's arts scene has experienced a strong and steady growth over the years and the nation is taking note of our progress: Cincinnati recently landed on Southern Methodist University's DataArts' annual Arts Vibrancy Index at No. 20.

According to a press release from local ArtsWave, the index evaluates large-sized metropolitan areas that have a population over one million. Cincinnati was one of four new cities to be added to overall list — and is one of only four Midwestern cities in the index's top 20.

“Cincinnati’s emergence on the Arts Vibrancy Index is a tribute to our history of strong citizen support for the arts. In a year of unprecedented disruption and uncertainty, it’s gratifying to see our region’s arts landscape affirmed as among the country’s most vibrant along with other regions that we compete with for employees, business relocations and tourists,” said Alecia Kintner, ArtsWave CEO and President.

Coming in at No. 1 on the list is the New York, New Jersey, White Plains region; followed by San Francisco, Redwood City, South San Francisco at No. 2; and Los Angeles, Long Beach, Glendale at No. 3.

The index considers three metrics in order to rank the metropolitan areas: level of art providers, arts dollars and government support. It is noted that the information used for the ranking was pulled from 2019, and reflects pre-pandemic life.

“Cincinnati’s rankings on the list give us things to be proud of and things to work toward,” says Kintner.

“We are ahead of the curve for arts dollars, which corresponds to our legacy of decades of community giving to ArtsWave and its predecessor, the Fine Arts Fund, and it correlates to high public demand for the arts. At the same time, we have an opportunity to nurture new and emerging arts providers as well as make Cincinnati more supportive and attractive to independent artists. These steps can increase the ‘supply’ of arts in our region.”

Cincinnati, OH-KY-IN, boasts a diverse economy, ranging from sectors in manufacturing to financials to marketing, providing an incubator for growth. The city’s German heritage and prominence in the mid and late 19th century created deep arts roots and a vision as an arts city by early founders and philanthropists. The city is adorned with mural art painted over the last 25 years by arts apprentices in a youth employment program and is home to architecturally significant buildings ranging from preserved Italianate brownstones to Zaha Hadid’s first U.S. commission, the Contemporary Arts Center (CAC).

Cincinnati refers to itself as “the city that sings.” The May Festival is the longest-running choral festival in the Western Hemisphere, dating back to 1873. A newly formed Young Professionals Choral Collective is the fastest-growing group of its kind in the nation, with more than 1,200 members. Cincinnati is home to a top-10 U.S. orchestra, the Cincinnati Symphony and Pops Orchestra; the second-oldest opera company in the country, Cincinnati Opera; the Cincinnati Ballet; Tony Award-winning Playhouse in the Park; Ensemble Theatre Cincinnati; and one of the few Shakespearean theaters to complete the canon, Cincinnati Shakespeare Company.

Cincinnati is also home to a professional school of music, the College-Conservatory of Music (CCM), and a leading College of Design, Art, Architecture and Planning (DAAP), both at the University of Cincinnati. The Art Academy of Cincinnati got its start at the Cincinnati Art Museum, which was founded in 1881 and became the first art museum west of the Alleghenies. The Taft Museum is a small art museum housed in a National Historic Landmark, with European and American masterworks.

Cincinnati is recognized as a top city in North America for film production because of its locally based on- and off-camera talent. Locals often note that Cincinnati has more festivals than it has weekends. In 2017 and again in 2019, Cincinnati created a new four-day festival called BLINK®, one of the largest light, art, and projection mapping events in the nation. In 2019, nearly 1.5 million people visited Cincinnati to experience BLINK, which spanned 30 city blocks and two states by crossing over the Ohio River into Kentucky.

Cincinnati is home to the nation’s first and largest community arts campaign, the ArtsWave Community Campaign, which has raised and invested over $340 million in the region’s arts since 1949. ArtsWave funds 125 organizations every year through an impact-based framework called the Blueprint for Collective Action in the Arts Sector, which drives a more vibrant regional economy and more connected community. Given this commitment to the arts, it is no surprise that Cincinnati ranks in the top 2% on all Arts Dollars measures. Over the last two decades, ArtsWave has committed to broaden support for small, mid-sized, emerging, and multicultural arts organizations, which has helped create a greater balance in the arts landscape.

There has been significant capital investment in the arts in the last several years as well: a $160M restoration of historic Music Hall; expansion of Ensemble Theatre; construction of a new home for Cincinnati Shakes; creation of the outdoor “Art Climb” staircase at the Art Museum; and more. Underway is a new Center for Dance and home of Cincinnati Ballet; new 4,500-seat music venue at The Banks built by the Cincinnati Symphony; and new main-stage theater at Playhouse in the Park.