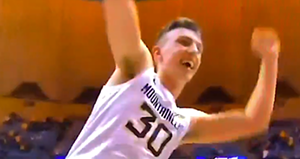 A Fort Thomas native and star high school basketball player at Silver Grove, Macke is a walk-on freshman at West Virginia University, where he plays for Cincinnati sports legend Bob Huggins. Macke hasn't seen much playing time this year and he was 0-5 on shots entering last night's game in which WVU played the Texas Longhorns. With the Mountaineers up handily, Macke was put in late in the game. With less than a minute to go, he put up a jumper that was rejected, but, after a quick turnover, Macke got the ball back and nailed a three-pointer.

The crowd and Macke's teammates went wild and even Coach Huggins offered a sly smirk. Macke — who was carried off on his teammates' shoulders after the game — had his shot spotlighted on ESPN's SportsCenter. Anchor Scott Van Pelt deemed it his "Best Thing I Saw Today."

"The place goes berserk!" Van Pelt said while showing the highlight. "That tells me this is a well-loved member of the squad. That's a reaction when, like, everyone in the joint just won a free sub sandwich."

So glad last night wasn’t a dream because this was the coolest thing ever!! ❤️ @Smacke1313 @espn @WVUhoops pic.twitter.com/gFRHmFEth8


Spencer Macke joked that he was simply trying to not shoot an airball.