Cincinnati Opera's 'Ariadne auf Naxos ' is Not to Be Missed

The slapstick-comedy-meets-grand-opera production is brilliant, accessible and wonderfully funny 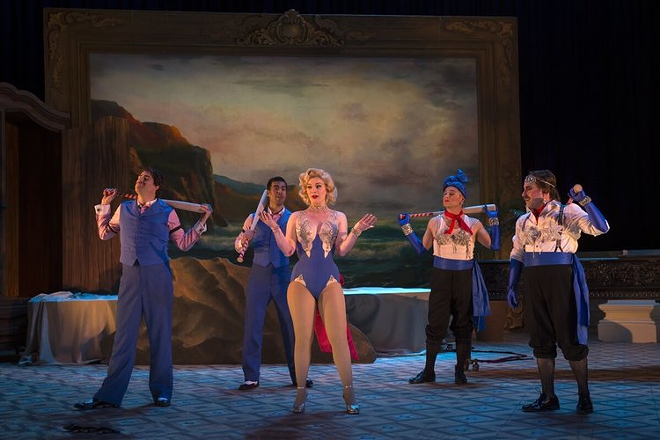 If you’ve been putting off checking out Cincinnati Opera, wait no longer. Ariadne auf Naxos is the best offering so far this season, with superb singing and acting in a terrific new production brilliantly staged by Omer Ben Seadia. The opera with music by Richard Strauss and libretto by Hugo von Hofmannsthal hasn’t been performed here in 62 years. It calls for a large cast nimble enough to handle grand opera pathos and slapstick comedy. It was certainly worth the wait.

No one dies and hilarity frequently ensues. The plot revolves around an evening’s entertainment for an unseen wealthy patron. An original opera — Ariadne auf Naxos — is to be premiered for the guests, followed by “light entertainment” from a comic dance troupe fronted by the vibrant Zerbinetta. When the major-domo announces that both will take place simultaneously so that guests can view the 10 p.m. fireworks, no one is happy but the shows go on. Thanks to a witty and idiomatic English translation and adaptation by Kelley Rourke, the dialogue is wonderfully funny and accessible. The opera itself is sung in German.

Cincinnati Opera artistic director Evans Mirageas came up with the idea of setting the opera in Pinecroft, the College Hill Tudor mansion inhabited by Cincinnati entrepreneur and inventor Powel Crosley, Jr. in the late 1950s. Director Ben Seadia and her design team ran with the concept with five-star results.

The cast is flawless, each one delivering terrific performances and, in several cases, truly outstanding ones. Women dominate in Strauss operas and Ariadne is no exception. As Zerbinetta, Liv Redpath commanded the stage before even singing a note, making a memorable entrance in a gold lame gown. The resemblance to Marilyn Monroe is deliberate and Redpath conveys Monroe’s aura of confident and comic sensuality as well as her underlying insecurity. Her showstopping aria was breathtaking in execution, high notes spun out effortlessly and never without expression. I’ve never heard or seen Zerbinetta portrayed with so much heart, hinting at a more tragic side.

Twyla Robinson gave her best Cincinnati Opera performance yet; she clearly conveyed Ariadne’s morbid obsession with a powerful dramatic delivery that warmed into love when Bacchus, played by Kyle van Schoonhoven, shows up. Mezzo Olivia Vote was a passionate Composer: Her performance of the Composer’s aria impressed with her drive and purity of tone. Alexandra Schoeny, Ellen Graham and Melissa Harvey were a dream trio of nymphs, singing elegantly.

Tenor Kyle von Schoonhoven was a standout, singing the murderously high role of Bacchus with ringing clarity of tone. Zerbinetta’s quartet of dancers — James Eder, David Walton, Jason Vest and especially Luis Alejandro Orozco — were as nimble with their movements as they were with their voices.

Thomas Hammons was the officious Major-Domo who channels Evans Mirageas’s radio voice as he announces a broadcast over WLW, which Crosley owned.

“Opera,” Zerbinetta proclaims, “where people rant and bellow and nothing happens.”

Ben Seadia creates plenty of action throughout, even when seemingly nothing is happening, in order to deepen the characters' humanity. The Composer is rarely seen after the first act; here, he's a silent presence, observing the performance of his opera and falling in love with Zerbinetta. The male quartet handles canes, baseball bats and choreographer Olğucan Borova’s steps with assurance. Everyone moves gracefully and with purpose.

The handsome set design is by Ryan Howell. Ryan Park designed the marvelous costumes that truly flatter the performers.

Ariadne auf Naxos is not to be missed — especially since so many of its cast and creative team are clearly headed for bigger stages.