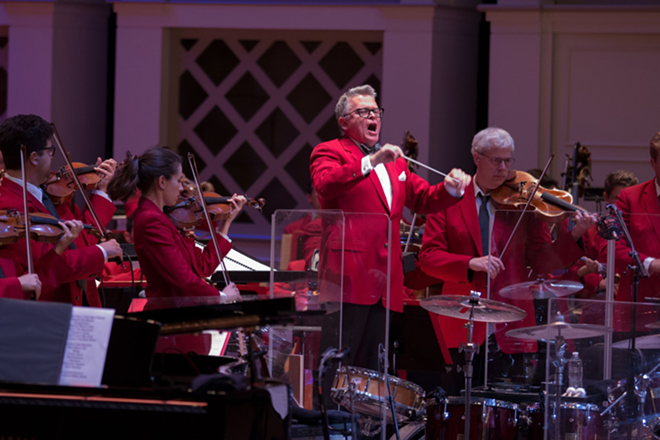 Photo: Facebook.com/CincinnatiPops
John Morris Russell leading the Cincinnati Pops at a past concert

The Cincinnati Pops has announced its 2020-21 season with conductor John Morris Russell, who will be celebrating his 10th year at the helm.

Kicking off this September, season highlights include both returning acts — Audra McDonald, Pink Martini and Cirque de la Symphonie — and fresh performances, like a comedic tribute to orchestras by improv troupe The Second City and a premiere by Grammy-winning composer Eric Whitacre.

“What unbridled joy I’ve had, working with our versatile and virtuosic musicians, some of the most exhilarating guest artists found on any stage, and, best of all, sharing it with the greatest Pops fans from all over town, across the country and around the world," Morris says in regard to 10 years with the Pops.

Beloved traditions aside — from their Fourth of July bash Red, White & Boom at Riverbend to their Holiday Pops and New Year's Eve concerts — here's the full scoop on the season's headliners:

John Morris Russell's Greatest Hits — Join the Cincinnati Pops as they celebrate Russell's 10th anniversary as a conductor. Like his time with the orchestra, the concert will pull from a breadth of genres — from Broadway faves, including tunes from Bernstein's West Side Story, to music from beloved pop culture films like E.T. all the way to renditions of modern classics like Bruce Springsteen's "Born to Run." Among all the nostalgia will also be something entirely new: a work from Grammy-winning composer Eric Whitacre. Jan. 22-24, 2021

Disney in Concert: "A Dream is a Wish" — Disney magic will come to Music Hall as the Pops throw it back to wistful tunes from childhood animated classics, including The Little Mermaid, The Lion King, Beauty and the Beast, Frozen and Aladdin. March 5-7, 2021.

The Best of Second City: Fully Orchestrated — Improv comedy troupe The Second City has been the start for many now-famous comedians, from Tina Fey to Bill Murray and Gilda Radner to Steve Carell and Amy Poehler. With bases in Chicago, Hollywood and Toronto, catch the latter group as they join Damon Gupton, principal guest conductor, and the Pops for "off-the-cuff antics set to symphonic classics." April 17-18, 2021.

Season tickets are now available at cincinnatisymphony.org or by calling the box office at 513-381-3300.