Arroyo is in his first year of eligibility, while Rolen is picking up steam in his sixth. 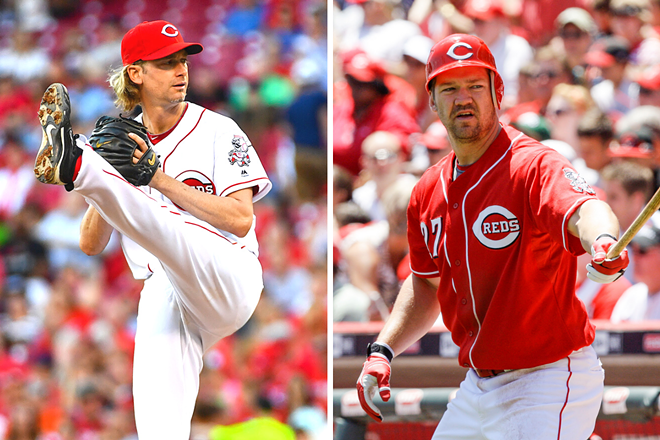 Photo: twitter.com/reds
Retired Cincinnati Reds players Bronson Arroyo and Scott Rolen are on the 2023 ballot for the National Baseball Hall of Fame.

Two former Cincinnati Reds players could be heading to Cooperstown.

Pitcher Bronson Arroyo and third baseman Scott Rolen are on the 2023 ballot for National Baseball Hall of Fame, with Arroyo in his first year of eligibility and Rolen in his sixth. Both had spent considerable time with the Reds, hitting major milestones.

There are a total of 28 candidates on the ballot, with 14 of them being new.

The Hall of Fame’s eligibility rules are somewhat complex and have different exceptions or classifications, but essentially, players must be retired from the game for at least five years, must have played in the majors for at least 10 seasons that touch some part of the last 15 years and must not be on the MLB commissioner’s “permanently ineligible” list (which is why Pete Rose is not in the Hall of Fame). Players who meet the criteria generally are eligible for election for 10 years, though there also are avenues for enshrinement through other committees or eras.

For induction, players must receive 75% of that year’s vote from the Baseball Writers’ Association of America (BBWAA).

Major League Baseball announced the class of 2023 candidates Nov. 21. Ballots are being mailed to 400 voting members of the BBWAA, who will make their selections through Dec. 31. Results will be announced Jan. 24.

Arroyo, who learned this fall that he will be inducted into the Cincinnati Reds Hall of Fame in July, spent eight consecutive seasons with the Reds between 2006 and 2013. He followed that up with a final season in Cincinnati in 2017 before retiring from the game.

During his time in the big leagues, Arroyo was an innings eater and shutout machine, and he had at least four go-to pitches – slider, changeup, moving fastball and curveball – that served him well. As a Red, he pitched more than 200 innings in every season except for two, even nabbing 240 2/3 innings in 2006. Arroyo also was good for strikeouts, routinely throwing more than 120 per Reds season except for in 2017. Over his entire Reds career, Arroyo tossed 1,157 strikeouts – something just five other pitchers for the club have done.

​​Arroyo's big 2012 postseason moment endeared him to Queen City fans forever. As the Reds' starter for game two of the National League Division Series, Arroyo had a perfect game through five innings and the team beat the San Francisco Giants 9-0 (Cincinnati would end up losing the series in five games).

Arroyo won a World Series championship with the Boston Red Sox in 2004 and was traded to Cincinnati in 2006.

It finally may be Rolen’s time to shine in the Hall. In 2022, Rolen received 63.2% of the BBWAA vote, and experts are predicting the third baseman to earn more than that for 2023.

Known for his hustle and reliability, Rolen is right up there with third basemen already enshrined in the Hall of Fame. Over his career, he tallied a .490 slugging percentage (fourth-best), 517 doubles (fifth), 2023 games (sixth), 316 homers (sixth) and .855 slugging (sixth). Rolen is one of just four third basemen ever to compile at least 2,000 hits, 500 doubles, 300 home runs and 1,200 RBI, and he’s one of just three players at any position to post those stats.