There were plenty of magical baseball moments in Dyersville, Iowa. 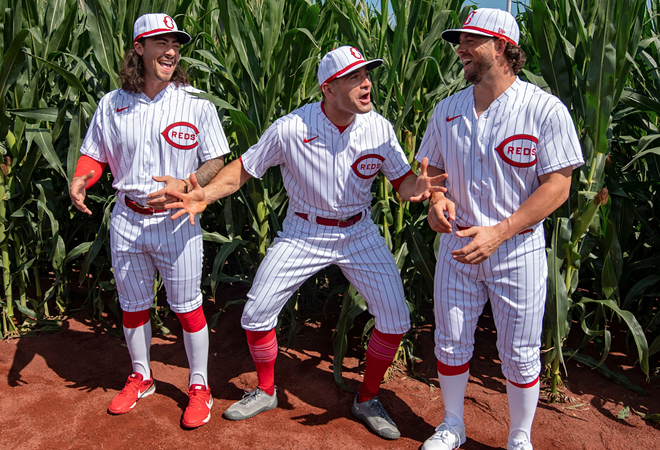 The Field of Dreams game itself didn't go so well for the Cincinnati Reds – the Chicago Cubs beat Cincinnati 4-2 – but there were plenty of magical moments in Dyersville, Iowa, on Aug. 11 that made players and fans alike marvel about baseball's ability to transcend almost everything.

Major League Baseball's Field of Dreams game is an homage to the 1989 Kevin Costner film Field of Dreams. In the movie, Costner's character, Ray, builds a ball field on his farmland that draws the ghosts of legendary baseball players from the early 20th Century. The event has been played for two consecutive years to big crowds in a specially constructed stadium next to the filming site. The stadium in Dyersville is much smaller than MLB stadiums throughout the country – there were only 7,823 attendees at Thursday's game, but it was a sell-out.

The Des Moines Register reports that there' no MLB Field of Dreams game on the schedule for 2023 due to the construction of an adjacent youth complex.

The Reds were not at their best for the throwback game. Starting pitcher Nick Lodolo was in fine form until he pegged Cubs third baseman Patrick Wisdom with a slider in the first inning. The Cubs then jumped on Lodolo with three hits in a row for three runs. Chicago added to their lead with a run in the fourth, but Reds right fielder Aristides Aquino stopped the bleeding with a catch and an amazing throw to third to end the inning with a double play.

The Reds' offense didn't come alive until the seventh when second baseman Matt Reynolds drove in two. Lodolo left back in the fourth after striking out six but walking four.

The Reds have a travel day on Aug. 12 and then will play the remaining games of the Cubs series at Great American Ball Park on Aug. 13 and 14. Cincinnati is 44-67 on the regular season.

Despite the loss and despite the lack of a Hollywood ending like the Chicago White Sox and New York Yankees game had in 2021, the Reds shared in a post-game briefing that they would cherish the Field of Dreams experience. Reds manager David Bell said that he thinks a lot about the historic players in the movie who returned to the ballfield that Costner's character had built.

"I always try to imagine what it would have been like for those guys to come back. They’re just out there because they love the game. There’s no other reason to be out there. They’re out there playing with their teammates, having a good time competing," Bell said. "That’s a beautiful thing to me. It’s kind of what we’re always trying to recreate."


The corn. The legends.

The march to the field from the corn was full of baseball royalty, with a pair of Cincinnati favorites leading the way.

Former longtime Reds outfielders Ken Griffey Sr. and Ken Griffey Jr. entered the Field of Dreams from the rows and rows of corn to an outpouring of love from the nearly 8,000 fans in the stands. The Griffeys had played around 20 seasons combined in Cincinnati and were the first father-son pair to play on the same team and at the same time with the Seattle Mariners in the early '90s. For many, the Griffeys represented what it means to both excel at and love baseball in the majors.

"Hey, Dad, wanna have a catch?" Junior asked his father, echoing Costner's character's final exchange with with his father in the film.

"I'd like that, son," the elder Griffey replied, bringing the the Field of Dreams film to life and opening the tear ducts for plenty of people watching.  The Griffeys then were joined on the field by other parent-kid combos "having a catch" of their own.

Cooperstown Hall of Famers representing the Cincinnati Reds and the Chicago Cubs then walked out — including Reds catcher Johnny Bench, who had talked about the film's father-son connection with former New York Yankee star Alex Rodriguez and former Boston Red Sox star David Ortiz during the pre-game show, and infielder Barry Larkin, a broadcast veteran who was the grand marshal for this year's home opener parade in Cincinnati.

And then... more magic. The Cincinnati Reds and the Chicago Cubs slowly walked out of the corn together, sporting their throwback uniforms. Many of them gawked around in wonder while some tried to keep their emotions in check while being in the very spot they'd dreamed about for decades. Players from both teams chatted with each other, with the Hall of Famers and with the kids, most of them grinning widely, slapping each other on the back and pointing out the sights as they crossed the outfield and lined up along the second- and third-base paths.

The @Reds and @Cubs enter the Field of Dreams accompanied by legends. #MLBatFieldofDreams pic.twitter.com/UJJ784kU75

Fergie Jenkins, who frequently notched 20-win seasons with the Cubs as a starting pitcher and threw more than 3,000 strikeouts over his Hall of Fame career, tossed the ceremonial first pitch to Bench, who widely is considered to be the best catcher to have ever played the game thanks to his expert defense and proclivity for slugging.

Sure, it all was pageantry. But for many watching, it also represented baseball in its purest form – something best enjoyed with family and friends.

Reds first baseman Joey Votto wore a microphone during the game and provided live commentary to analysts in the broadcast booth. As in previous outings, Votto was full of golden nuggets.

Ahead of the game, Votto frequently had talked about why playing in the Field of Dreams game was such an "exceptional" moment, and he shared more of that during the third inning Thursday. Votto said that when he was just eight years old, he and his father would play catch nearly every day, with his dad hoping Votto would become a pitcher.

"He passed away 14 years ago, and now here I am at the Field of Dreams, longing for a catch with my father but still basking in this with a smile, knowing that if he was here, he would have loved it," Votto said. He added that the Reds weren't used to flying both into and out of town on the day of a game, but this was an exception.

"For this particular game, for this day, for this moment, it is absolutely worth it and is, I think, one of the most special days of my career," Votto said. 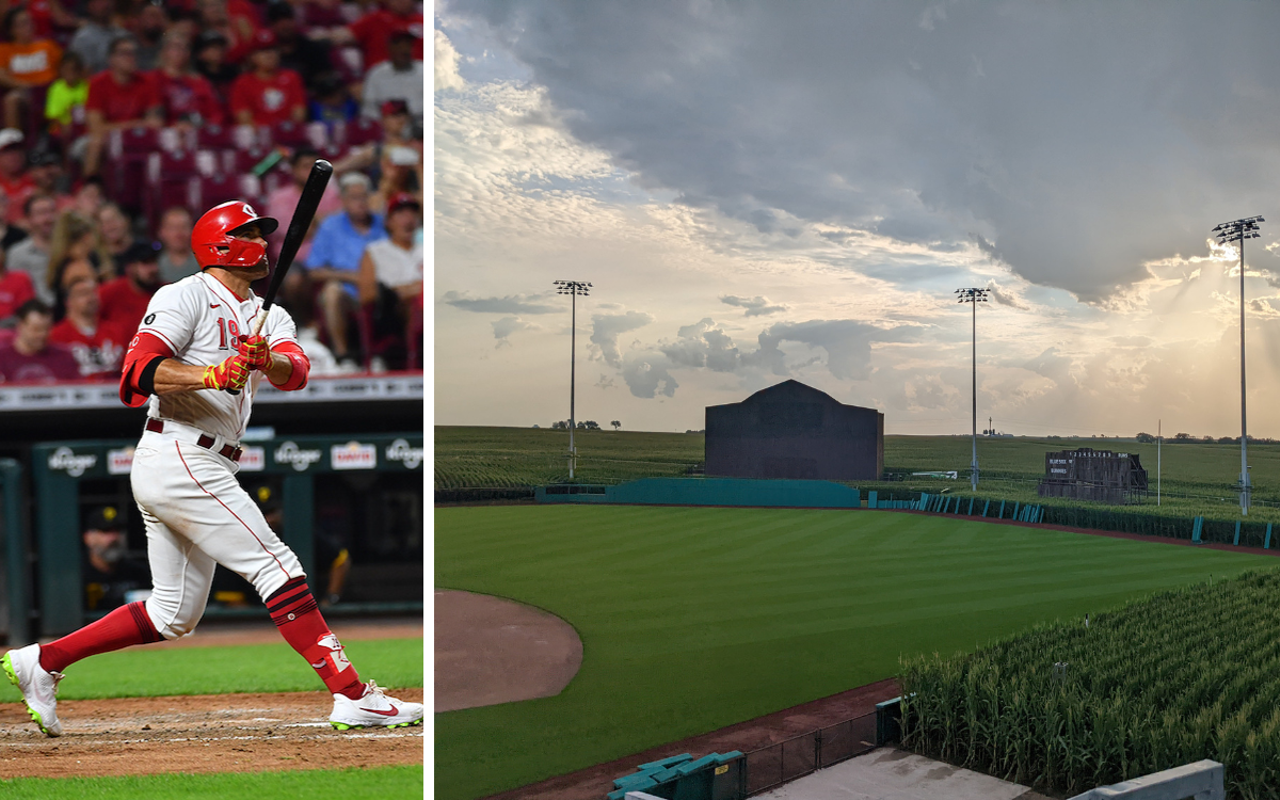 
Votto said that Lodolo – though he wasn't having his best regular-season outing – showed immense promise as a starter and is learning how to manage his game in the major leagues.

"I always say that the major leagues is the easiest place to play, but you have to be equipped for it. Everything behind the scenes and about the game on the field was built for the player to succeed, but it will absolutely swallow you," Votto said. "It will gobble you up if you don't have the skill, if you don't have the talent to be able to handle the rigors of the dailyness of this game, because an 0-for-4 turns into an 0-for-24."

Votto then launched into a story about legendary pitcher John Smoltz, who was in the booth asking Votto questions and whose father had passed earlier that day. Votto said that as a rookie, he faced Smoltz and knew he was formidable. But he also learned something from Smoltz that day.

"So, I'm a young player. I'm angry and competitive, and John's pitching. He did not like the way we rubbed up the balls. And he was screaming at me and the umpire and our bench," Votto remembered as Smoltz laughed. "John's screaming, and I'm in the frame of mind like, you've got an option. You can either be intimidated by this superstar, all-time great, Hall of Fame kind of guy, or you can match it. And so I think I walked." 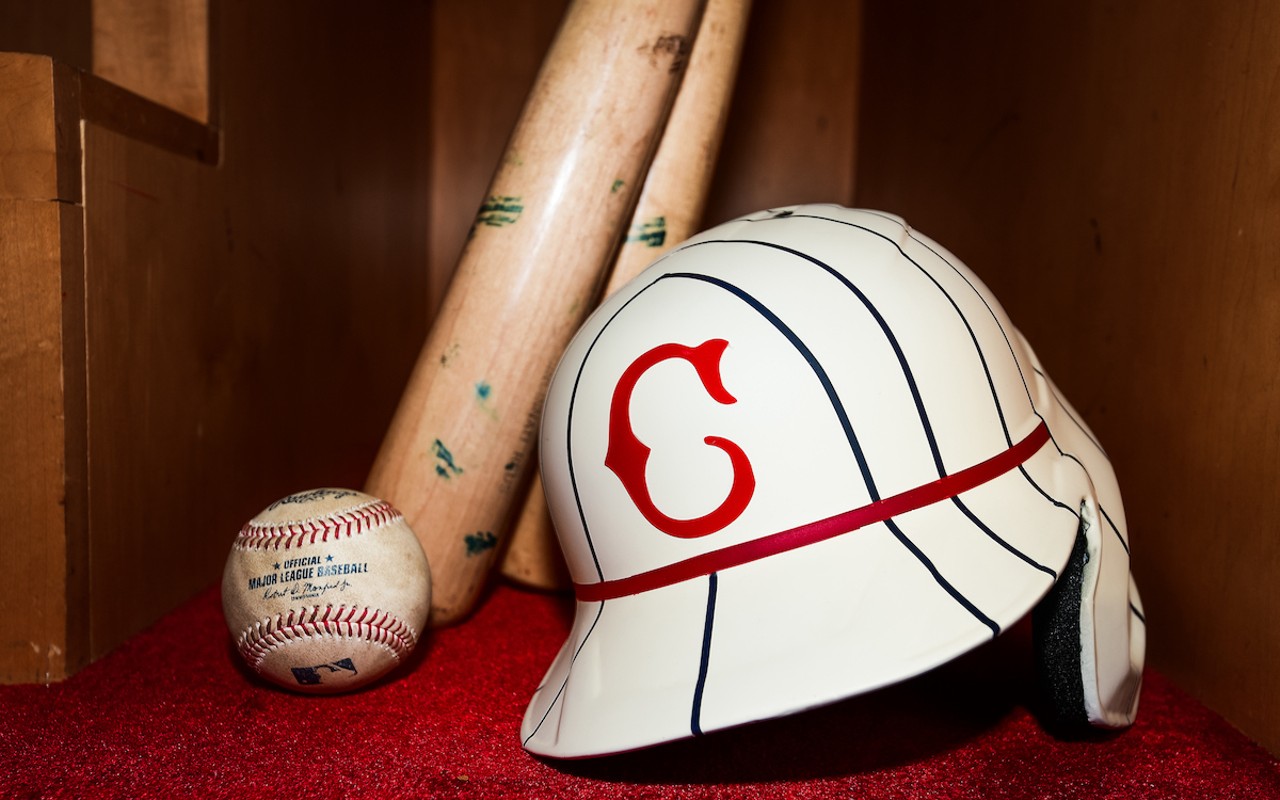 Here's What the Cincinnati Reds' Field of Dreams Uniforms Look Like: The Reds' uniforms are inspired by those worn by the club's 1919 World Series team.


Votto reminisced with Smoltz about the way the pitching game has changed since the '90s and early 2000s, when Randy Johnson, Greg Maddox, Tom Glavine and others ruled the mound. Back then, Votto said, pitching was more about command than it was about velocity.

"Every single one of you guys had exceptional command, fantastic command. You know, I thought of you guys as power guys – power arms, power sliders – and the command that all of you had shocked me," Votto said.

But Smoltz said that Votto has now lived and played through a unique time.

"The uniqueness for me in you is that you transcend kind of two generations of the way the game is played, and you've adjusted in a unique way to where it was all about command and throwing the ball to where we wanted to throw it, and now the velocity that's at such an unbelievable level," Smoltz replied. "And you've survived that and really thrived through changing your game throughout your career."

"I like how you slipped in a 'You're old' comment in a roundabout way. Good for you, John," Votto laughed. "It's tough now. And this is what I say: If you can time a fastball and you can lay off a breaking ball, if you can command the zone, you stand a chance. But if you cannot time a fastball, this is not the league for you."


Smoltz noted that Votto was in his 16th year in the majors – would he make it to 20? Votto replied that before the game, he'd asked Ken Griffey Sr. about how he felt playing until he was 41." Griffey told him that he felt he could have played two more years and told Votto to "keep going" and "have fun."

"And I'm having a great time. I want to keep playing," Votto said.