“You’ll see disparate programs much different from what we’d originally planned, The choices are more forward-leaning, representing composers of color. In keeping with the times, it can’t all be happy.” 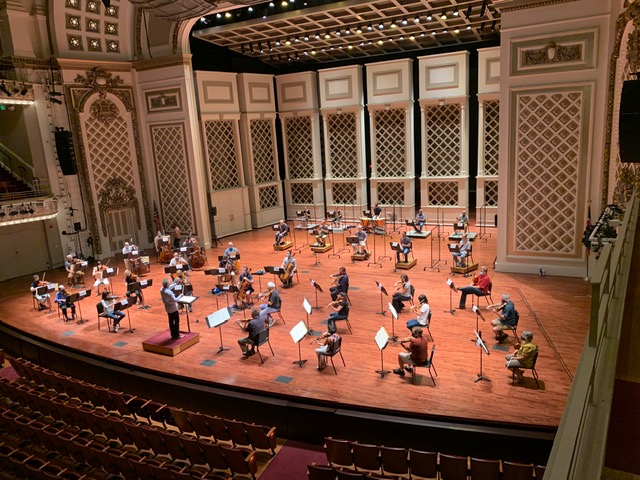 Photo: Tyler Secor
CSO acoustic testing at Music Hall. Louis Langrée at the podium with members of the CSO, rehearsing a Mozart piano concerto with Michael Chertock at the keyboard.

On July 27, the Cincinnati Symphony Orchestra and the Cincinnati Pops announced that due to the COVID-19 pandemic, their fall seasons were being “re-imagined.” The CSO will now offer four concerts beginning on Sept. 26 and the Pops will present three concerts, including a December holiday show, all livestreamed from Music Hall’s Springer Auditorium.

All seven concerts will be free.

"It's more important than ever for us to be a resource for and accessible to our entire community, which is why we made the decision to make our seven Live from Music Hall digital events free," said CSO President Jonathan Martin in a release at the time.

It’s been almost six months since the orchestra performed before a live audience and, in an interview, Martin says the musicians “are kicking the stalls. They’re eager to get back to business.”

But it’s not business as usual.

The 2020-21 CSO season was originally scheduled to begin Sept. 18 and the program lineup, which featured large-scale symphonic works, has been scrapped. Since every performance must comply with health and safety standards, the orchestra needs to be reconfigured, which will be a factor in the music for the four concerts that are still being programmed.

The logistics are beyond complex, especially when dealing with maintaining physical distance.

“In some cases, we’re over-complying,” Martin says. “String players are 6 feet apart, but brass and wind players are 12 feet apart and surrounded by Plexiglass containment structures that are 6 feet high.”

All musicians are masked; brass and winds obviously remove their masks when they play.

The musicians returned to work the week of Aug. 10, participating in acoustic sound checks in Springer Auditorium. The number of musicians is limited to 30 to 40 at a time and Martin says he’s encouraged by what he’s heard.

The size of Music Hall’s stage allows the orchestra more room and the CSO is using the Pops setup (i.e., sound shell walls being adjusted to allow for more space to maneuver).

But it’s still impossible for the entire orchestra to be onstage at one time.

“We’re playing around with different configurations and what will sound best,” Martin says.

Those configurations will determine concert programs, and so will a pandemic by-product: screen fatigue. Performances are an hour with no intermission.

Tracking the community’s emotional mood is an equally vital factor, Martin says, and he credits CSO artistic director Louis Langrée for his acute sensitivity to a wide range of audiences.

“You’ll see disparate programs much different from what we’d originally planned, The choices are more forward-leaning, representing composers of color,” he says, adding, “In keeping with the times, it can’t all be happy.”

The full, new schedule will be announced at the end of August, but here's what's been canceled:

The logistics of producing a livestream are also very complex, comparable to producing a live TV show. When the CSO streamed a performance of Mahler’s Piano Quartet and the world premiere of an oboe fanfare by CSO creative partner Matthias Pintscher, the technical crew outnumbered the performers. The performances were powerful and poignant: the oboe fanfare played in the empty balcony, the five masked Piano Quartet musicians rising at the piece’s conclusion to face an empty hall.

There were seven to 12 camera operators and robotic cameras, pre-recorded material interspersed with live performance and lighting changes, as well as directors, camera switchers, score readers “and a small army of people handling the live stuff,” says Martin.

The complexities of livestreaming increase with the number of musicians onstage.

“We’re an orchestra, not a television production company, but we have to build a digital content infrastructure that enables us to deliver high-quality programs more easily and efficiently,” Martin says.

He acknowledges that this necessitates cost-shifting that includes purchasing digital recording equipment and hiring the requisite technical staff.

All concerts are free, a policy that Martin calls a necessity for audience building.

“It’s being fiercely debated across the music world, but I believe this is the exact moment when you don’t want to throw up pay walls. We need to have people who’ve never heard the CSO to hear it,” he says.

The public response to the May concert exceeded the most optimistic projections, according to Martin. To date, the program has reached nearly 40,000 viewers, and the Pops' Fourth of July concert has almost equal numbers. (The CSO concert can be viewed on the CSO website.)

Martin acknowledges that the CSO faces major income gaps “in the millions” stemming from lost ticket revenues and related income streams. But he also points to the generosity of the CSO’s board, subscribers and donors.

“Most of our subscribers didn’t ask for refunds on their ticket orders and we undertook a highly targeted fundraising initiative to cover the gap, and it’s going very well,” he says.

Both the CSO and the Pops benefit from the Louise Dieterle Nippert Musical Arts Fund endowment, which yields over $3 million annually.

Additional steps to close budget gaps include cost reductions in day-to-day operations and “a prudent draw” from a rainy-day fund. At the same time, investing in state-of-the-art digital production is a priority and a necessity to maintain the CSO’s presence in the local and wider communities.

Martin points out that 70% of the CSO’s income comes from contributions and endowment.

“You have to be engaged with your donor community and with those who give when they don’t have to,” Martin says. Professionally produced concerts for donors have been “wildly successful and look a heck of a lot better than most of what you see on Instagram or Facebook.”

Even as the CSO focuses on maintaining audience support, there’s acknowledgment of the need to broaden its audiences not only by presenting performers of color. With only one Black musician on its roster (cellist Norman Johns), the CSO has committed to increasing representation within the orchestra’s ranks as well.

In 2015, the CSO began a collaboration with the University of Cincinnati's College-Conservatory of Music to create the Diversity Fellowships for up to five string players, funded by the Andrew W. Mellon Foundation. The three-year fellowship provides tuition, stipends, mentoring and performances with the CSO and has a roster of 21 Fellows.

But Martin still calls the progress glacial. He’s working with an organization that serves as a resource for educating, mentoring and promoting young musicians of color, and says further information will be announced later this year.

“Will it change things overnight? No. But it will change the systemic process," he says. "And we have to start now.”

For more on the Cincinnati Symphony Orchestra's reimagined schedule and upcoming livestreams, and to watch the May broadcast, visit cincinnatisymphony.org.