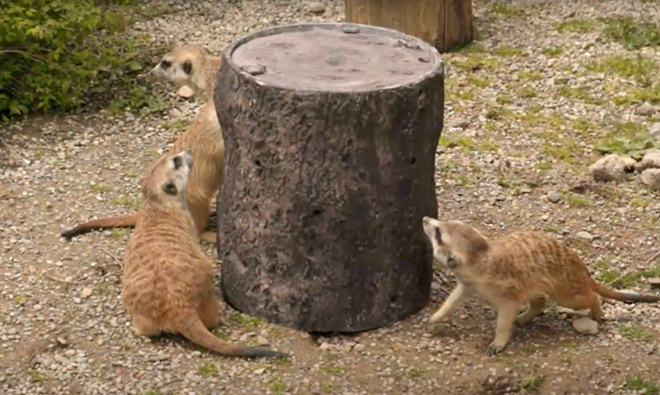 The group is designing 3D metal printed feeding devices that offer a more natural foraging experience for animals at the zoo, including birds and meerkats.

“Something that we often think about is how to mimic natural feeding behaviors in the animals that we care for. In the wild, animals are adapted to find, acquire, and process food — and it’s not always easy! In human care though, food is always available and of good quality and balance, and in many cases, it’s consumed quite quickly,” said David Orban, Cincinnati Zoo’s animal excellence manager, in a press release.

“For example, one challenge that we often see when we offer live insects to some of our birds or small mammals is that they are captured and consumed in a matter of five to 10 minutes. We’ve had the idea to create a more complex feeder that will extend foraging duration, in turn, extending animals’ physical activity and mental stimulation, leading to more naturally behaving wildlife," he said.

The zoo worked together with the consulting team to imagine a tool that would emulate the process of finding food in the wild for animals.

The pro-bono collaboration resulted in a product that resembles a tree trunk and randomly dispurses crickets at various times through a central enclosure and tubes that weave through the device and exit through the bark-like exterior.

“We have seen that foraging time and the animals’ investigation and interaction last for up to a few hours in our tests compared to a few minutes, which is really exciting for us because that means we can utilize it multiple times a day and in different habitats. We have really seen that a lot of animals have been interested in it and continue to stay interested in it, which is exactly what we wanted,” Orban said.

GE Additive dropped off one of the devices before the zoo temporarily closed due to the coronavirus pandemic. During the shut down, zookeepers have had the opportunity to explore the ways in which their animals interact with it.

They plan to deliver more to the zoo, including one as an educational example that reveals how it works inside the device to teach visitors about the ways in which 3D printing can benefit the zoo.

“It is amazing to see the positive impact that this unique partnership has had for the animals,” said Dave Chapin, leader of the AddWorks consulting team at GE Additive in the same press release.

See the device in action and learn about the partnership in the video below: