Cincinnati Zoo's Fiona the Hippo Auditions To Be 2021 Cadbury Bunny

If chosen, it won't be the first time our beloved hippo princess has defied the odds. 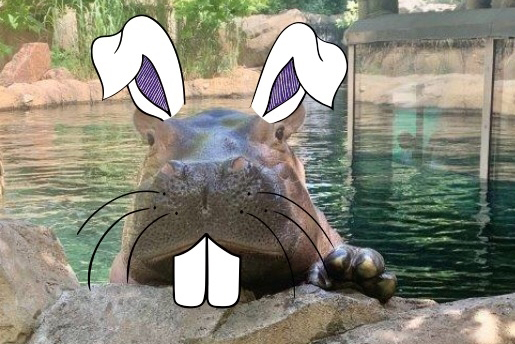 Fiona the Hippo has plunged into a new venture by announcing her audition as the 2021 Cadbury bunny.

The annual international contest, hosted by Cadbury, will feature the winner in its annual Easter commercials and win $5,000.

The contest includes custom stickers that participants can pin on a picture of their pet that give them perky ears, long whiskers and buck teeth.

On Fiona’s audition page, the hippo sports her new look and tells more about herself. A product of a premature birth, Fiona was the smallest hippo to be born and survive. Now four years old, she resides in the Cincinnati Zoo with her mother.

In a recent tweet, the zoo expressed confidence in Fiona’s modeling chops.

“NoBUNNY is cuter than Fiona!” the Cincinnati Zoo says in the post.

Fiona has thrown her hat in the ring to be the new Cabury Bunny! NoBUNNY is cuter than Fiona! 🐰🦛https://t.co/8KOIFHyBgu pic.twitter.com/4CfJmfOCu8


Photo entries of potential bunnies are accepted now through March 1. People are encouraged to vote for their pick during the judging phase March 10-17.

According to Cadbury’s tryout page, photo entries will be judged based on criteria found in the official rules. The top ten to twenty semi-finalists will be contacted to submit a video audition. The final winner will be chosen by America’s popular vote.

Whichever semifinalist has the most votes on Cadbury’s website will be declared the winner on March 23.

While Fiona has overcome incredible odds during her life, only time will tell whether this hippo is ready for this new exploit.