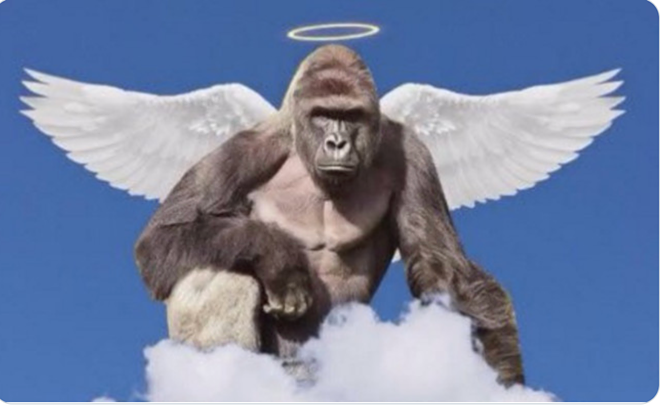 The Cincinnati Zoo's 17-year-old western lowland gorilla Harambe was killed four years ago, on May 28, 2016, after a 3-year-old child climbed into his enclosure. Harambe grabbed and dragged the child. And, as zoo employees feared for the child's life, they decided to shoot the gorilla.

The incident obviously sparked all sorts of controversy about childcare and animal care. But both primatologist Jane Goodall and famed zookeeper Jack Hanna supported the decision to kill Harambe, with Goodall saying, "It was awful for the child, the parents, Harambe, the zoo, the keepers and the public. But when people come into contact with wild animals, life-and-death decisions sometimes have to be made."

With all that said, of course there was YouTube footage of the incident, and it sparked tons of memes, including the weirdest: dicks out for Harambe. That shit went viral in 2016. The New York Times, Washington Post, People magazine — they were all talking about Harambe in 2016. Harambe, Harambe, Harambe.

And so, on the fourth anniversary of his passing, Harambe is back and trending on Twitter. Let's take a look (because the memes are still so bizarre):

Today’s society if Harambe was still with us pic.twitter.com/oehB8HWeVZ

harambe is trending again by #BlackLiveMatter isn't ??? what the fuck

Harambe we will never forget what a tragedy.. DICKS OUT pic.twitter.com/mGXGZzXwWd

“And when he [Cincinnati zookeeper] had opened the seventh seal, there was silence in heaven and so began the darkest timeline” - Revelation 8:1

It’s been four years since our sweet prince went to the big jungle in the sky. RIP Harambe, you were gone too soon. pic.twitter.com/Kd70UTm3Xh

It's been 4 years since Harambe (RIP) ascended to heaven and I highly recommend perusing the @BuzzFeed / @BuzzFeedNews posts tagged here because WOW was it a different time on the internet: https://t.co/cUgVYzZ340

The U.S.A. is on a downhill slide. Some say it started when we elected Trump, or Obama, or Reagan, or on 9/11. All valid points. But I think the key event was four years ago today, when we lost this beautiful creature. Rest in peace, Harambe. #dicksout pic.twitter.com/0rXZkdgjm6


4 years ago, Harambe shot & killed at Cincinnati Zoo. Here's my portrait based on Venus flytraps, from my series of endangered animals made of endangered plants. Was Best of Show at "Endangered" show in San Diego that year w/ proceeds going to wildlife conservation. RIP Harambe. pic.twitter.com/TC1d2trfDb