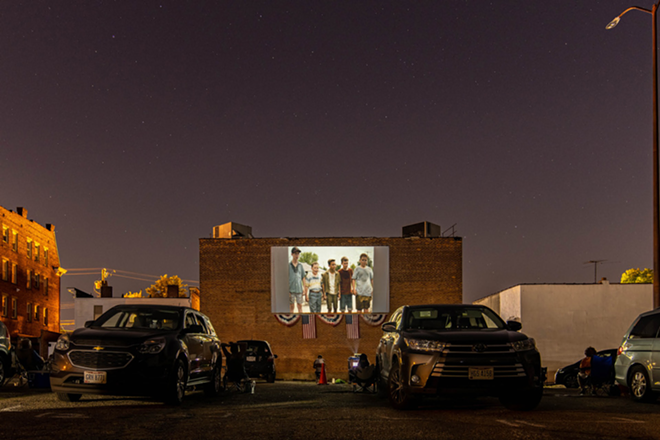 And they've just announced they'll be extending the event through the rest of the summer, with a final screening Sept. 7. Plus, starting the first week of July, the Hollywood Theatre will expand its days of operation to include Mondays, so films will now screen Thursday through Monday.

“In the middle of a turbulent time like this, we need to do whatever we can to keep our community strong,” CHCURC executive director Seth Walsh said in a press release. “What better way to do that than through a drive-in movie theater? By hosting a consistent event like this, we’re able to build strong bonds with our neighbors, even in a time of real uncertainty.”

With movies projected onto the back of the theater building, the new drive-in works similarly to others, requiring moviegoers to park and tune their car radios to the right frequency. Guests can begin parking at 8:15 p.m.; films begin at 9:15 p.m. The admission price is $20 per car. There are 43 spots and you have to buy tickets in advance online.

The drive-in concept developed as part of a plan to revitalize the Hollywood Theatre, according to Walsh.

“With people spending so much time apart, we wanted to find a safe way to bring the community back together,” Walsh said. “It also became a great way to support our local businesses by having them provide food for the event.”

Food from a local businesses is offered every night, according to the drive-in’s website.

The film line-up has been announced through July:

Sunday, July 5: The Day After Tomorrow

Thursday, July 30: Planet of the Apes