ComedySportz is the latest of the city’s growing, improving collection of improv troupes

Split into two teams of three, improvisers compete for audience laughter as they carry out comedy as a sport. 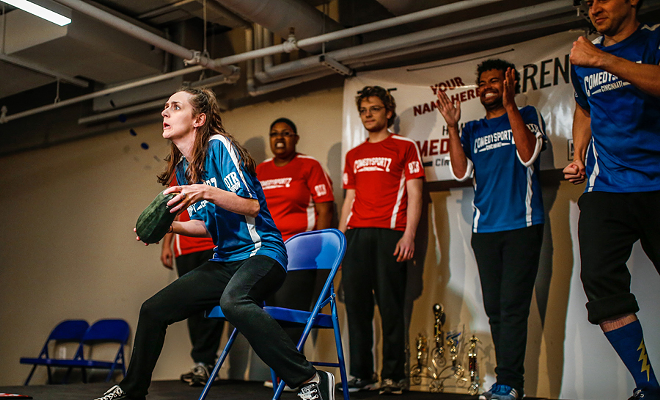 Photo: Hailey Bollinger
A member of the blue Northern Kentucky Grass team improvises as other players watch.
As I watch a grown man bake an imaginary cake in slow motion, I cannot help but think, without irony or sarcasm, “Well done, Cincinnati.”

I’m taking in a ComedySportz match — a type of friendly scrimmage for improvised comedy. ComedySportz Cincinnati is a 6-month-old institution that, to me, acts as a symbol of a healthy local improv scene, a scene that even 5 years ago felt anemic. Now troupes are easy to find — OTRimprov, Improv Cincinnati, Highly Improvable — and, based on the enthusiastic audience I witnessed at Comedy-Sportz, demand still exists.

ComedySportz began in Milwaukee in 1984 and boasts such alumni as Saturday Night Live’s Jason Sudeikis and The Daily Show’s Jessica Williams. Cincinnati is the 23rd city to be awarded a ComedySportz license, a process that requires a sound business plan and strict adherence to the organization’s branding. Any city can host an improv troupe, but only this handful can wear the prestigious jerseys.

The Cincinnati franchise, co-managed by Kirk Keevert and Eileen Earnest, has been in the works for years. Keevert also helped create OTRimprov, now a mainstay in our local theater scene, which acts as a bit of a farm team for ComedySportz Cincinnati.

During the annual Improv Fest Cincinnati, produced by OTRimprov, Keevert had a chance to test audience reactions to the ComedySportz format when another improv team dropped out at the last minute.

“The audience ate it up,” he says. “It was palpable how much they loved that match.”

In a ComedySportz match, two groups of three improvisers form “red” and “blue” teams. Keevert and Earnest hand-select each match’s players from a roster of around 30, based on, as Keevert says, “availability, strengths, experience” and more. The red team always is called the Cincinnati Big Machine; the blue one is always the Northern Kentucky Grass. These teams take turns performing improv comedy in a style called “short form,” made popular by Whose Line Is It Anyway?

For example, on the night I attended, improv games included Pick a Play (improvisers must converse using only lines from a randomly selected play script), Chain Murder (a “mime and gibberish” version of the board game Clue) and Replay at Bernie’s (players take turns acting as though another “dead” player is still alive, à la Weekend at Bernie’s).

Most of the teams’ points are earned based on audience applause, but teams can earn extra points by involving willing audience members in their games. As someone who watches a good deal of improv, I can tell you that one of the lines between good improv and great improv is how a troupe treats audience involvement. In the case of ComedySportz Cincinnati, the audience is the star — in this match, and especially in the aforementioned cake-baking episode, I witnessed the players make buffoons of themselves to be sure that no audience participant felt hung out to dry.

ComedySportz takes the sports metaphor pretty far. Performers are “players,” the stage is the “field” and, in lieu of a master of ceremonies, it uses a referee. The ref has the power to call fouls on improvisers and audience members alike — for instance, for breaking the event’s firm G-rating through innuendo or rough language. (In ComedySportz-speak, they “keep the comedy above the waistline.”)

Memorial Hall’s ground-floor studio space, which can accommodate around 100 people, is festooned with pennants and streamers and pumped-up jock jams are played between games.

“It’s a different approach to improv that I had never considered, this team dynamic,” says ComedySportz member Tatiana Godfrey. “Our practices are like you’re running drills in football or in soccer. We get different suggestions and run them a bunch of different ways.”

“It’s not comedy about sports, it’s comedy as a sport,” Keevert adds.

Though the sports trappings are there, the competition itself is mostly for show. “ComedySportz is a sport, but at the same time you can’t have that fully competitive mindset or come at it aggressively. It’s in a collaboration and it’s fun,” says team member Andrew Ian Adams.

Short-form improv comedy is light and fun, welcoming to even the most general audience. But while the audience comes first, it is also a great tool for the actors on stage.

“Going into auditions, being able to bring an improv background has given me the edge in more than one instance,” Adams says. Outside of ComedySportz, Adams is a commercial and stage actor; he recently performed in Know Theatre’s Beertown and The Fisherman’s Wife, as well as the 2017 Fringe Festival. He says there are many directors who encourage actors to bring “your own input, your own impulses” to a role, and an improv background helps hone that skill.

Each year, ComedySportz Worldwide hosts its World Championship, an event o where members can meet, train and swap ideas. Keevert recently went to this year’s host city, San Jose, Calif. “It’s a big family reunion for me,” he says.

Keevert has been performing at various ComedySportz locations for 18 years, since discovering the sport in Houston in 1999.

“It was really special for me this year to go and represent a whole new city and be able to tell people that not only is there this new ComedySportz in Cincinnati, but it is here because the improv scene and the theater scene are so very lively throughout the rest of the year here,” he says.

Keevert mentions that members from more established ComedySportz cities were impressed at how quickly Cincinnati’s team roster and audience numbers have grown.

“As this ComedySportz has blossomed and more people have discovered us, it has become more and more clear to me that Cincinnati was the right place for Comedy-Sportz,” he says.

“It is on our radar, down the road, to bring that World Championship to Cincinnati,” he adds. “We have a beautiful city for it.”