If you're worried you might forget about the 17-year cicada phenomenon later, this shirt will help you remember. 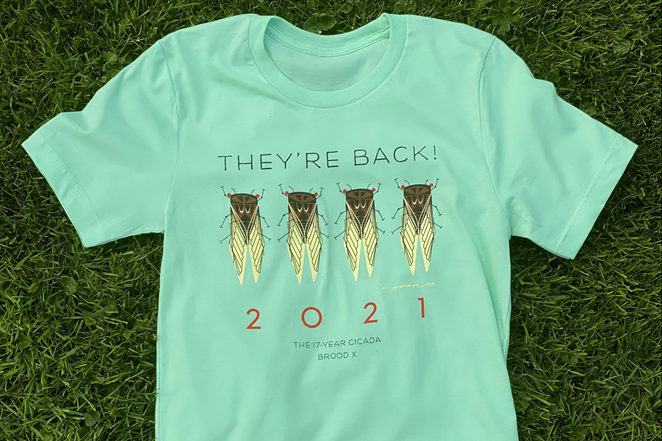 Any day now, trillions – yes, trillions — of cicadas will emerge from the earth to scream loudly for several weeks in celebration of their 17-year return. And in honor of the phenomenon, Charley Harper's 1960s cicada design has made a comeback on a commemorative t-shirt.

The shirt comes in four different colors: white, blue, green or grey, and features the words "THEY'RE BACK!" with four cicadas, the year and the brood type.

"Their temporary takeover is not an easily forgotten event, and we thought we'd commemorate this wild time with limited edition, locally printed t-shirts featuring Charley's 1960's depiction of these little guys," a press release reads. "While we're slightly aghast about the impending invasion (some areas will see 1.5 MILLION per acre!!?) we are also approaching this time with curiosity and a nervous excitement - they are the MAGICICADAS, after all!"

Priced at $28, the shirt ranges in sizes from small to 2XL and is available via charleyharperartstudio.com.