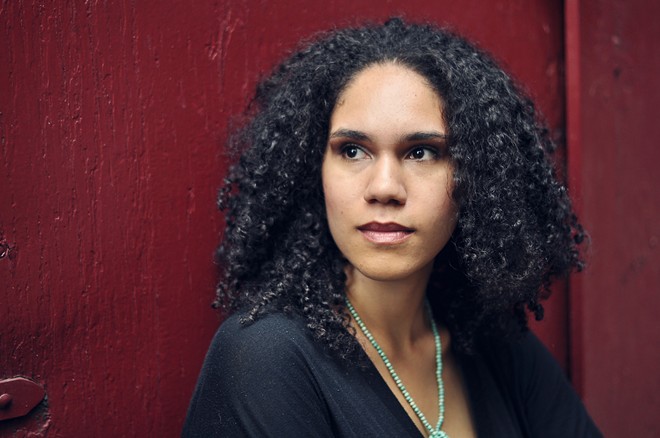 Photo: Jiyang Chen
Jessie Montgomery will debut I Have Something to Say in Cincinnati during the 2022 May Festival.

Cincinnati’s gem of a cultural tradition is winding down for the year.

The Cincinnati May Festival – a two-week choral celebration backed by the Cincinnati Symphony Orchestra – concludes May 28 with a nod to joy and freedom.

The festival, which is nearly 150 years old, also will spotlight the Cincinnati premiere of I Have Something to Say by Jessie Montgomery, an acclaimed composer, violinist and educator.

Incorporating powerful words spoken by abolitionist Sojourner Truth and climate activist Greta Thunberg, I Have Something to Say pays tribute to women speaking truth to power and challenges listeners to hear their messages.

“I like the idea of setting a political statement to music,” Montgomery says in a 2020 interview with Matthew Swanson, the May Festival’s associate director of choruses. The piece originally was scheduled for the 2020 season that was canceled at the onset of the COVID-19 pandemic.

The Cathedral Choral Society in Washington, D.C., joined the May Festival in commissioning the piece to commemorate the passage of the 19th Amendment granting women the right to vote. It’s Montgomery’s first composition for a large orchestra and chorus.

In a Zoom interview with CityBeat, Montgomery says that connecting past and present was a way of projecting into the future. But while researching Sojourner Truth, Montgomery made a startling discovery.

On May 29, 1851, Sojourner Truth appeared at the Ohio Women’s Rights Convention held in Akron. She delivered a speech famously known as “Ain’t I a Woman,” but Montgomery says that the words most people highlight and attribute to Truth were not actually the abolitionist’s, according to some sources. The popular version was published twelve years later by a white abolitionist who not only rewrote the speech, but also rendered it in a Southern dialect Truth never spoke, many sources say (Truth was born in New York and died in Michigan).

For her composition, Montgomery says she chose the actual words that Truth had approved for publication in 1851. Montgomery also includes thoughts from Thunberg, who spoke to the future in a no-holds-barred address to the 2019 United Nations Climate Action Summit.

“I knew I wanted the voice of a young woman juxtaposed with Sojourner Truth’s and I kept coming back to Greta Thunberg’s speech,” Montgomery says.

To create the text, Montgomery turned to her mother Robbie McCauley, the distinguished performance artist, writer and director.

“I’m a lot like Jessie. I read, listen and re-interpret text around scenes that interest me,” McCauley explains in the 2020 interview with Swanson. “With Sojourner Truth, I returned to this sentence: ‘I have something to say,’ which is what she actually did say.”

“I had Greta say the same thing,” McCauley continues in that interview. “So it shows two different generations of women opening a space for women who have something to say about vital topics.”

Montgomery says she and McCauley discussed that scenario and how Truth and Thunberg could speak across generations, with McCauley envisioning a public setting that becomes a courtroom. For Montgomery, it was especially vital and personal to have a children’s chorus sing the hopes for the future.

In her younger years, Montgomery sang in the New York City Children’s Chorus, and although she chose to pursue violin rather than voice, she says she has a soft spot for children’s ensembles. The May Festival’s Youth Chorus takes on the children’s chorus parts, and Montgomery acknowledges that there will be some adjustments made from the original writing for children’s chorus, but the voices will be young ones.

I Have Something to Say opens with orchestral improvisation that Montgomery describes as a sonic representation of a courtroom or public gathering place.

“There’s sounds of shuffling feet, rustling papers, a gavel, even fingers typing on a keyboard,” she says.

She adds that it’s clearly theatrical and even unsettling for an audience expecting clearly defined musical points of entry.

The audience will hear Truth and Thunberg singing the same melody, an effect Montgomery says creates a uni- fied vision and a relationship between the two women. Their messages are strengthened by the large chorus repeating their words. The children’s chorus appears midway, ad-libbing and improvising until they sing as one.

I Have Something to Say premiered in March at the National Cathedral in Washington, D.C. May Festival Principal Conductor Juanjo Mena says the piece is full of “beautiful things, with wonderful sonorities for both chorus and orchestra.” He hears the children’s chorus as central to the piece “and quite rightly.”

Mena adds that the experience will be much different from the National Cathedral performance.

“Our audience will [experience] a full orchestra, the full May Festival Chorus and the May Festival Youth Chorus in Music Hall, which is much larger and has a different acoustic than the National Cathedral,” Mena says.

Montgomery says she is eager to hear her piece in a large space and performed by a full orchestra and chorus. “You can’t ignore a giant choir that’s singing these words!” she says.

Montgomery is working with the Cincinnati Symphony Orchestra (CSO) for the first time, although she debuted as a composer when the CSO opened its 2020-2021 season with Banner, her acclaimed interpretation of the national anthem for string quartet and string orchestra.

“The CSO played it so tremendously,” she says.

Both Montgomery and Mena agree that I Have Something to Say has more urgency and relevance today.

“Greta Thunberg captured the attention of young people who are com- mitted to taking care of our beautiful planet,” Mena says. “I love her words alongside those of Sojourner Truth. We still have so much to do for equality, for women’s rights, for the rights of people of color.”

Montgomery acknowledges that major changes face even more chal- lenging obstacles. “For the sake of humanity and the planet, this message is even more present,” she says.

Sadly, McCauley never heard the finished work, dying on May 20, 2021. Her daughter calls the text “a microcosm of her aesthetic,” meshing historic events in a semi-fictional setting to challenge the listening audience.

“That’s really powerful, especially now. It will be so reaffirming to finally hear it,” Montgomery says.

I Have Something to Say is the final performance of the Cincinnati May Festival. 7:30 p.m. May 28. Music Hall, 1241 Elm St., Over-the-Rhine. Info: cincinnatisymphony.org.