Cincinnati's streetcar was recently rebranded as the Cincinnati Bell Connector. But what exactly is the difference between a connector and a streetcar system? 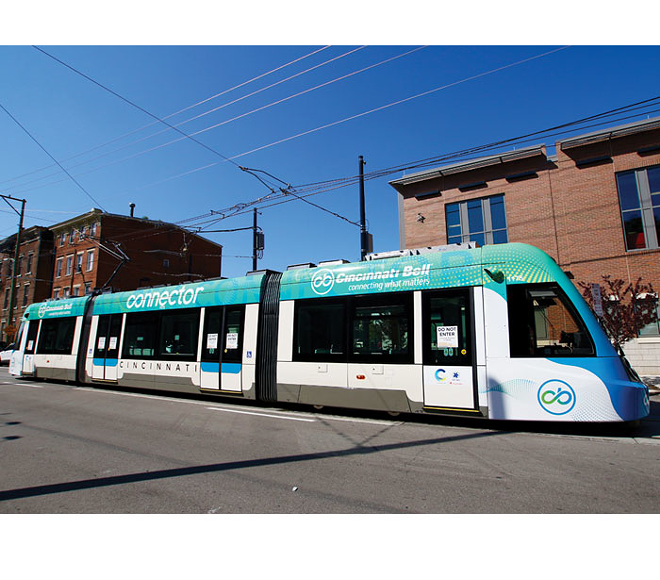 In terms of urban design and aesthetics, what does it mean for a city to have a “connector” rather than a streetcar system?

It hasn’t been a question asked that much, in part because there hasn’t been much time to ask it. To some extent, our Cincinnati Streetcar became the Cincinnati Bell Connector almost out of the blue.

On Aug. 18, as plans for this Friday’s grand opening of the 3.6-mile looping route through downtown and Over-the-Rhine were being finalized, Cincinnati Bell announced it was paying $340,000 per year for 10 years to rename the streetcar the Cincinnati Bell Connector. It would also alter the look of the five individual cars and the stations to reflect its blue-and-green corporate colors.

In gratitude for this much-needed underwriting, the city — which owns the streetcar — is fully committed to not calling it a streetcar ever again. On its website is an entry headlined, “Goodbye Cincinnati Streetcar, Hello Cincinnati Bell Connector.”

There might have been a time when some opposed a corporate name attached to a public utility. But this is different.

The streetcar really needs this $3.4-million vote of confidence. Also, the significance of a major Cincinnati corporation paying to be so publicly identified with the streetcar — after the corporate community stayed out of the long war over building it — is not to be underplayed.

There are still people out there hoping for its failure, and they do presumably buy the phone and other services the company offers. It took some corporate courage and belief in urban progressivism to do this. It’s also possible Cincinnati Bell is ahead of all the negativists who believe the streetcar will fail. It may well have taken a look at all the redevelopment already occurring along the route since plans for the streetcar first were announced and said, with confidence, “This thing’s already a hit! Let’s get onboard.”

From an aesthetic point of view, it’s good to know corporations have colors and Cincinnati Bell has such nice ones. Its blue and green, while not technically complementary, are visually appealing in a soothing, eye-catching way. They even match the color scheme of Metro’s buses. (Metro, like the streetcar, is operated by the Southwest Ohio Regional Transit Authority.) Now if only Cincinnati Bell had a corporate song that the streetcars could play?

Still, should we really be saying goodbye to the Cincinnati Streetcar in favor of a replacement, Cincinnati Bell Connector? Might there be an unintended consequence? A “connector” has specific transportation meanings that are limiting. The Norwood Lateral, for instance, connects I-75 with I-71. But the hopes for this are higher than being the Norwood Lateral of streetcars. (True, it has a telecommunications meaning, too.)

“Connector” may actually be an accurate term for what the streetcar is right now. Its route is meant to get you to places within or near to its relatively narrow perimeter.

But it isn’t meant to be going in circles for eternity — or even in the near future. It could grow out and replace things — commuting, polluting cars, especially, and someday even some of the excess roadway links that scar the cityscape. Maybe it will even render the Norwood Lateral unnecessary.

In other words, it will be a viable form of mass transit, a wide system with growth potential. (There already were plans, now on hold, to get the Cincinnati Streetcar up to the University of Cincinnati.) Referring to it generically as a “streetcar,” even while acknowledging its new proper name, clearly implies belief in that possibility.

Actually, Cincinnati Bell may already know this. On the individual streetcars, the “C” and “O” in the word “Connector” overlap and form an infinity logo. I asked a publicist for the streetcar launch what that means, and she sent this reply from Metro.

“(It) represents unlimited growth potential and opportunities for the streetcar and the community we are helping connect. It’s a graphic statement that also illustrates how Cincinnati Bell has been connecting the Greater Cincinnati area for over 140 years and will continue to do so well into the future.”

“Unlimited growth potential.” I like the sound of that.