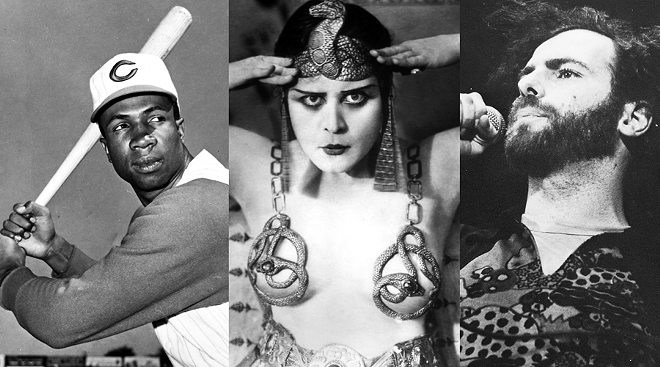 Photo: Frank Robinson courtesy of the National Baseball Hall of Fame Library, Cooperstown, N.Y. / Others provided
Would Frank Robinson (left), Theda Bara or Jerry Rubin look good on a public mural?
ArtWorks, which celebrated its 21st birthday last week with a big party/fundraising event at Lunken Airport, has reason to be proud. The public murals it has debuted recently, especially downtown and in Over-the-Rhine, have shown the nonprofit organization has found its groove with its choice of subject matter.

It has brought us somewhat surprising and colorfully designed tributes to pop culture and “people’s history” local heroes, rather than the kind of stuffy establishment movers and shakers that usually get their names on buildings and their faces on memorial statuary.

Here’s hoping, as 2017 looms, that the nonprofit finds the funding and wall space to continue this approach. And here are a few suggestions that could fit into some of the themes of ArtWorks’ mural program — like Cincinnati Legends, Cincinnati Masters and Cincinnati Heritage. ArtWorks wants the subjects to be deceased, but maybe exceptions could be made for those who are older so they could be here to see the mural dedication. (ArtWorks did commemorate Jim Tarbell on a mural and Cincinnati Master artist Ruthven, both of whom are still with us).

Theda Bara: Born in Cincinnati in 1885 as Theodosia Burr Goodman (her family home in Avondale still stands), she became known as The Vamp — an early sex-symbol archetype — in a still-young Hollywood for her starring role in the 1917 silent film Cleopatra. One of Hollywood’s biggest stars, her career ended early and many of her films were lost. She died in 1955. Interest in and scholarship about her have grown in recent years.

Boone County Jamboree: Because Cincinnati’s WLW radio station had so much power — 500,000 watts from 1934 to 1942, when there was a need for stations with national reach — it had a lot of rural listeners. And for them and locals, it created the Saturday night Boone County Jamboree in 1938, an early live-broadcast Country music program. Cincinnati thus became an employment center for such top early Country musicians — and future Country Music Hall of Famers — as the Delmore Brothers, Merle Travis and Grandpa Jones (all now deceased). Their presence here also led Syd Nathan to start King Records; Jones and Travis made the first recordings in 1943. In 1945, the Jamboree was replaced by Midwestern Hayride, which lasted for several more decades on radio and television. Brian Powers, a local history librarian with the Public Library of Cincinnati and Hamilton County, believes that the Jamboree deserves a wall mural. Who could disagree?

Doris Day: Even though she retired from movies in 1968 and has lived a fairly reclusive life since, she has remained an instantly familiar name — an icon — because of the sunniness of her hit records and romantic friendliness of her movies of the 1950s. (Never mind that arguably her best movie, Alfred Hitchcock’s The Man Who Knew Too Much, was a thriller.) She also has become a dedicated animal-welfare advocate. It’s all a long way from her beginnings here, more than nine decades ago, as Doris Mary Ann Von Kappelhoff in Evanston. Certainly, as much as Rosemary Clooney, she deserves a mural.

Robert Mapplethorpe: Not a native son, nor ever a resident, but he’s certainly a hero — a martyr — for art lovers, First Amendment devotees and LGBTQ-rights advocates in Cincinnati. In 1990, a traveling museum show of his work, The Perfect Moment, was targeted by local officials for prosecution after it opened at the Contemporary Arts Center. Several of the photographs were sexually graphic. Mapplethorpe had died of AIDS-related complications in 1990, so the county infamously prosecuted the museum and its director. A jury acquitted them, and history has come to see the event as a triumph against the city’s puritanically censorious right-wing elements. A mural honoring Mapplethorpe and commemorating that event would be a source of pride — and a pilgrimage site — for the city.

Frank Robinson: In general, we don’t really need murals to honor Cincinnati Reds players and managers because the team itself takes care of that with its statuary and Hall of Fame. But there should be an exemption made for Robinson, who has a statue and is a Hall of Fame member, because of the way he was once treated. One of the team’s greatest stars ever, he was Rookie of the Year in 1956, hitting 38 home runs. But he was traded to the Baltimore Orioles after a productive 1965 season, when he was just 30, by an owner who infamously claimed Robinson already was too old to be valuable. He then led the Baltimore Orioles to a 1966 World Series victory and subsequently had distinguished years as a player and manager. The three players the Reds got in exchange for Robinson? Suffice it to say, they probably won’t be getting a mural here anytime soon.

Jerry Rubin: A tragic figure but also a fascinating one, Rubin’s life encapsulated much of the colorful, radical changes brought by the 1960s. Born here in 1938 to a father who was a truck driver and Teamster official, he took an early interest in journalism and politics. During the 1960s, he moved from traditional anti-Vietnam War protesting to co-founding the wild-looking and anarchic (but also funny) Yippies, or Youth International Party. He died in 1994, out of the limelight, after being struck by a car in Los Angeles. He remains Cincinnati’s towering contribution to the counterculture.

Donald A. and Marian Spencer: Maybe Cincinnati’s most memorable couple of the 20th century, the Spencers fought for civil rights and good government for so long and in so many areas that they remade our city’s culture. Particularly notable, Marian led the NAACP’s long, difficult and ultimately successful fight in the 1950s to desegregate Coney Island Amusement Park, and just last year her opposition to a ballot issue to change the city’s charter to include a permanent tax levy was influential in its defeat. There already is a school named for them in Walnut Hills — but they deserve more.

Feel free to make your own suggestions, either to CityBeat or straight to artworkscincinnati.org/public-art/request-a-project.