During her Wave Pool Art Space Is Your Space residency, Abigail Smithson plans to embark on a project titled "What Is the Harm In a Reach?" 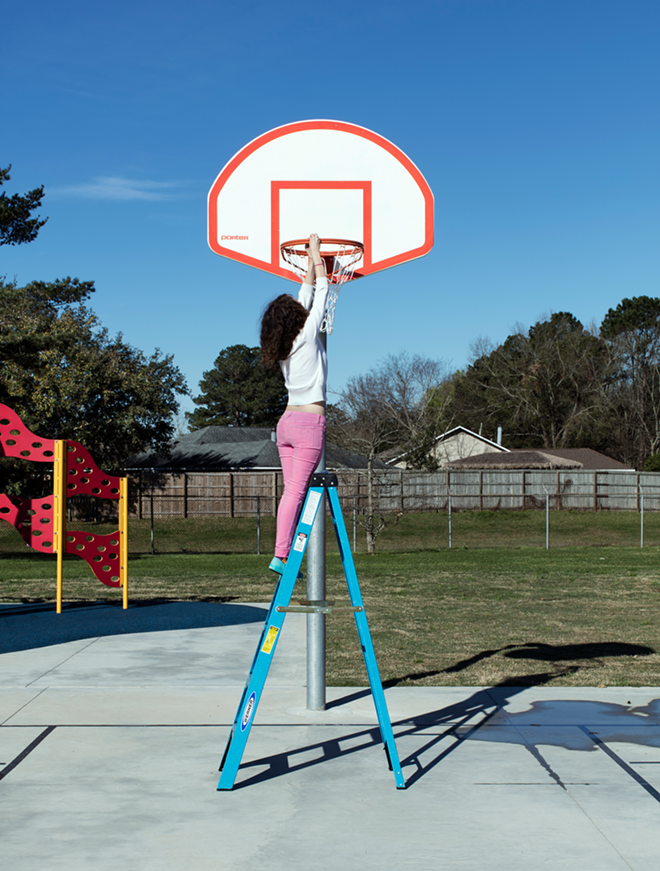 A college basketball season doesn’t end at the final buzzer. March Madness wouldn’t be complete without its ceremonial send-off: that post-tournament tradition in which the season’s reigning champions climb a ladder and cut the nets free from the arena’s hoops. As enduring a tradition as football’s Gatorade shower, net-cutting makes victory manifest. The scissored scraps keep record of a hard-fought season long after the scoreboards are reset.

But what about the nets that populate our own communities? The tattered, nylon webs that dangle above blacktop; the rusted chain-link alternatives — they too deserve reverence, says Arizona-based artist Abigail Smithson,  who is currently taking part in Wave Pool’s Art Space Is Your Space residency into August.

Smithson’s Net Trades project, chronicled on her website, was conceived of while she studied photography at Louisiana State University’s graduate school. The series of images finds Smithson and others climbing ladders at parks and playgrounds, ready to separate net from hoop. The old nets, taken in for closer photographic examination, are then replaced with new ones, hence the titular “trade.”

“I like the idea that if I wanted that net, I’d have to go and ask permission from a school principal, from a secretary, from a homeowner — any place that had a net that I thought was interesting,” says Smithson. “That’s a healthier dynamic to me than just trying to show up at these places and photograph. Why not have a sort of abstract representation that’s true to the place based on the tears, the rust and the way it’s sort of captured the weather that passes through that space?”

Smithson’s artistic output is fixated on basketball, particularly on the ways the game relates to record-keeping beyond the stat sheet. The nets themselves are records, for example, as are the words and concepts we use to describe the game.

During her Wave Pool residency, Smithson plans to embark on a project titled What Is the Harm In a Reach?, an installation that collects high schoolers’ drawn depictions of basketball moves (reaching, a shot, passing) and exhibits them as cyanotypes — blue-tinged prints that develop with sun and water.

The collaboration will include a church youth group in Camp Washington, and she’s currently on the lookout for high school basketball teams that would be interested in participating.

“We have done some small-scale game-oriented projects...but we’ve never had an exhibit or a full artist-in-residence project devoted to sports,” says Wave Pool Executive Director Calcagno Cullen. “I think there is quite a bit of overlap between sports and art, but perhaps we don’t think of these ties often. Athletes and artists are both heavily dedicated to their craft, working to perfect technique and form. I often think that athletes are simply artists working with their body instead of pencils and paintbrushes.”

“The league office will determine how to deal with any possible instance in which a player, coach or trainer does not stand for the anthem,” reads a memo sent to NBA members. “Teams do not have the discretion to waive this rule.”

A long-time fan of the league, Smithson felt torn between her love of basketball and the implication of supporting an organization that suppresses its players’ speech.

“I know that he knows the kneeling isn’t a bad thing,” she says. “That’s what I truly believe after hearing a lot of interviews with him. I think it was kind of, like, a showmanship thing. So I just wrote a letter to him, saying, ‘Here are my thoughts.’”

Smithson’s first open letter to Silver made her case for the freedom to protest, closing with the assertion that “disruption of the norm is a way to start discourse.”

The writing practice became cathartic for Smithson. Inspired by “Dear Abby” columns, the soon-to-be-sent letters act as both a diary and a statement of purpose for her work. These dispatches, touch on everything from the meaning of the word “passing” to her visit to Michael Jordan’s hometown in Wilmington, North Carolina.

“My dream is that I would send him these letters and he’d ask me for a meeting,” Smithson says. “My long-term goal is that, in some way, I could work for a basketball organization as exactly who I am today — an artist.”