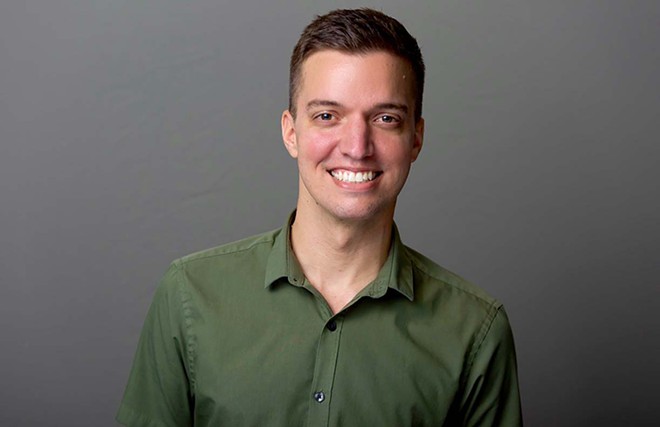 Photo: Provided by the Carnegie
Tyler Gabbard is the new theater director of the Carnegie in Covington.

There’s been a changing of the guard at Covington’s Carnegie with Tyler Gabbard stepping up to fill the role of theater director filled by Maggie Perrino for eight years. She departed to become the theater director for Cincinnati’s School for Creative and Performing Arts. Gabbard is new to a leadership role, but he’s been affiliated with the Carnegie for years as a scenic designer, and his experience is fully suited to his new responsibilities.

“The Carnegie’s theater department could not be in better hands," Kim Best, the Carnegie's executive director, said in a press release. "Since joining the team in October, Tyler has brought an excitement and enthusiasm to the Carnegie that I’m sure patrons will see reflected in upcoming productions.”

Gabbard, a Northern Kentucky native from Campbell County and current resident of Covington, says in the release, “I’m excited to continue offering meaningful artistic experiences that are both entertaining and enriching to the community.”

Formerly the vice president of the League of Cincinnati Theatres, Gabbard graduated from New York University’s Tisch School of the Arts where he focused on theater management and scenic design. (A professor there praised him as a “man of the theater."). He subsequently received a certificate in nonprofit management from Northern Kentucky University, where he served as events and publicity manager for the School of the Arts. He was chosen to take part in the Emerging Leadership Institute at the Association of Performing Arts Professionals’ annual conference in New York City.

Most recently, Gabbard worked at the Children’s Theatre of Cincinnati as its patron experience manager, overseeing marketing, sales and customer satisfaction. He’s proud to point out that its subscriptions have already returned to pre-pandemic levels, a retention rate that’s the envy of other theaters. He saw his first Carnegie show in 2007 and worked on his first production there, Kander and Ebb’s musical Chicago, in 2013. He also was involved in a memorable 2014 production of Stephen Sondheim’s Sweeney Todd: The Demon Barber of Fleet Street.

Gabbard’s first big task is to produce the stage musical Singin’ in the Rain, based on the much-loved 1952 movie musical starring Gene Kelly. Perrino will return to stage and choreograph the production, and Gabbard is designing its scenic aspect. “It’s going to be fun to make this a technicolor extravaganza, and for the first time, we’ll have some intentional rain on the stage," Gabbard says. Two decades ago, before the Carnegie’s renovation, the theater space had a leaky roof that occasionally sprinkled precipitation on patrons and performers.

In conjunction with Gabbard’s appointment, the Carnegie has announced his first season of summer musicals: Kinky Boots, Lady Day at Emerson’s Bar & Grill and Guys and Dolls will be staged in repertory during July and August 2023. Gabbard, who designed the sets for the 2022 summer season (Rent, Into the Woods and George Remus), will create scenery for the upcoming season that can be quickly adapted from one production to the next. He’s also announced that Hello, Dolly! will be staged in January 2024. These productions demonstrate how Gabbard is building on the tradition of musicals that Perrino established.

Kinky Boots won six Tony Awards in 2013, including best musical. With music and lyrics by pop legend Cyndi Lauper, it’s the story of a factory owner struggling to save his family’s shoe business when he meets the colorful Lola, a drag star who advances an unorthodox suggestion about a new product line, boots that can stand up to high-stepping drag queens. Gabbard plans to kick off the summer season on June 30 with a “Boots Bash,” a flashy sendoff to LGBTQ+ Pride Month that will celebrate the season’s artists and creative team.

Lady Day at Emerson’s Bar and Grill, opening in July, is a one-woman portrait of blues singer Billie Holiday. Set in a gritty Philadelphia bar in 1959 where she gave one of her final public performances, it’s an evening chronicling her life story and featuring songs that made her famous, including “God Bless the Child” and the chilling anti-lynching number, “Strange Fruit.”

In August the Carnegie will add Guys and Dolls to rotate with Kinky Boots and Lady Day. Musical theater enthusiasts call Guys and Dolls the perfect musical comedy. Its characters are a crew of rambunctious gamblers and showgirls as well as a straight-laced Salvation Army gal. The memorable score is full of classic showtunes including “Luck Be a Lady,” “I’ve Never Been in Love Before” and “Sit Down, You’re Rockin’ the Boat.”

“We’re focusing on what we can do best — familiar musicals,” Gabbard says. He plans to continue that commitment with a production of the blockbuster Broadway hit Hello, Dolly! from 1964, featuring some of the greatest show tunes in musical theater history: “Put on Your Sunday Clothes,” “Before the Parade Passes By,” and the show’s iconic title song with singing waiters heralding Dolly Levi’s grand arrival at the Harmonia Gardens Restaurant. The show follows the exploits of the meddling matchmaker over the course of one unforgettable day.

The Carnegie is on the brink of establishing a new ticketing system, and, in conjunction with that, Gabbard intends to offer friendly pricing for people under 35. He also hopes to reach out to the theater’s nearest neighbors in Kentucky and to broaden the Carnegie’s reach by expanding awareness farther south into Kentucky while retaining the mix of attendees from across the Tri-State. His considerable experience and energetic approach should keep the Carnegie on the radar of musical theater lovers.

The Carnegie is located at 1028 Scott Blvd. in Covington. More information about the 2023 season can be found by visiting thecarnegie.com.