Cozy Up with These New Cheesy Holiday Romcoms, Streaming on Netflix

Made-for-TV holiday film fans: You may be asking yourself, "Can anything top last year's Netflix film 'The Knight Before Christmas'? Not only in name but also in content?" Made-for-TV holiday film fans: As November wanes and December approaches, you may be asking yourself, "Can anything top last year's Netflix film The Knight Before Christmas? Not only in name but also in content?"

Starring Vanessa Hudgens, the film is completely saccharine, campy and bends the space time continuum... FOR LOVE AND CHRISTMAS MIRACLES. It follows a medieval hunk from Ireland (the accent is questionable), bedecked in chainmail, who is magically transported to 2019 by a wood witch — literally referred to as an "old crone" in the film — on his quest to become a "true knight."

Becoming a "true knight" apparently involves banging V. Hudge. She was either a baker or some kind of teacher or shopkeeper, and she hits the knight with her car and assumes he has amnesia — and not that he has traveled through time and landed in front of her vehicle. Hudgens invites this random man she has hit with her car — who is dressed like a 14th-century castle roamer — into her life and guest house with little to no concern that he might be mentally ill or a murderer. At one point, he disappears in a puff of smoke back to the 14th century to see his brother — no one bats an eye — but then tells the old crone to send him back.

Long story short: This is so insane and on the nose in terms of a knight-in-shining-armor trope, as well as the "night/knight" before Christmas pun that it could be offensive. But it is also highly enjoyable.

It falls into one of my favorite Christmas movie categories, "ghost love," wherein dead people (or out-of-place time travelers) decide to resurrect themselves/live in the present day (or past) to be with their one true love. It's a play on the Scrooge thing, but with more kissing.

(The best in this genre, by far, is The Spirit of Christmas, about a hot bootlegger who is murdered in the 1920s and haunts his giant house, but falls in love with the modern day lawyer/agent trying to sell it. And then literally abandons his ghost wife in some Close Encounters of the Third Kind-shit to be with her. See also: non-Christmas-related Kate & Leopold and The Lake House.)

That aside, Netflix has some new holiday films in their line-up (not nearly as many as last year, but what can you do?).

Here's what you can expect stream this season:

First up, Netflix released Holidate on Oct. 28, starring Emma Roberts, some handsome Australian dude, Kristin Chenoweth (who appears to have had some slightly odd plastic surgery) and Frances Fisher. Roberts plays a recently dumped 30-something whose mom nags her about not having a new boyfriend on Christmas. We can tell Roberts is depressed about her love life because she's always wearing sweatpants, sneaking cigarettes and shoveling candy into her face. So while returning some oversized pajamas to the mall, she meets the Australian dude — also heartbroken but not admitting it — and they decide to be each other's "holidates:" permanently on-call dates for every holiday, which run the gamut from New Year's Eve to Easter and Cinco de Mayo to Mother's Day...both literally and in the film's timespan. There's a no-sex rule in this bargain, but you can't have a romcom without it, so things get complicated. Verdict: Of course this is watchable, if only to see how many holidays the writers came up with that people take "dates" to. Saint Patrick's Day is not a date holiday.

Now onto the films I have not yet watched, but definitely will be...

This appears to be a film about the military using their equipment to drop medicine, food and toys to remote tropical islands over the holidays. Kat Graham plays an uptight Washington, D.C. type sent to examine the validity of the project and report back to her superior about whether or not the government should be spending its money on the titular Drop. While there (still not quite sure where "there" is; Hawaii?), she meets Alexander Ludwig (giving off some Prince Harry vibes) and the two butt heads before maybe finding the true meaning of Christmas, together, on the other side of the world? And love, obviously. Seems a little White Christmas-y in its use of soldiers, but I saw zero evidence of a musical holiday score or choreography in the trailer. Disappointing — or not — depending on how you feel about large singing-and-dancing numbers. (Please, Santa, let it be better than Holiday in the Wild.)

This is for kids, but seems quite whimsical — and appears to have zero romance, so skip if you just want romcoms. Forest Whitaker (who I find terrifying in most film roles) plays a great inventor named Jeronicus Jangle who lives in an imaginary holiday town (resembles the Nutcracker world based on the costuming) and was supposed to create some great toy that would revolutionize the gifting game. Thankfully (or not), this does appear to have some large singing and dancing numbers, as well as talking robot toys. And messages about how you can do anything and magic lives inside of you. I will watch this, mostly for Phylicia Rashad. Oh, and Keegan-Michael Key, who looks like he plays the villain. 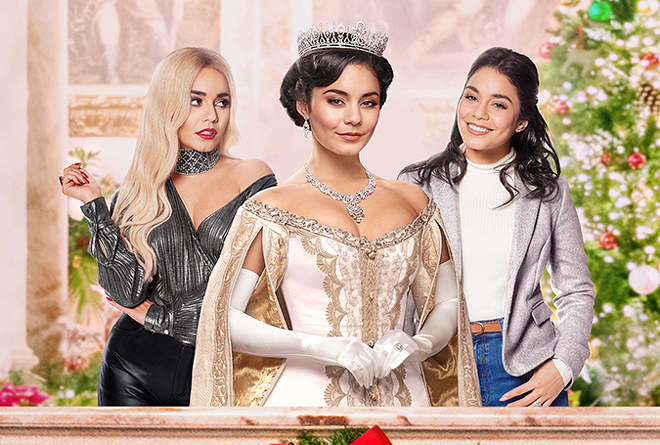 HOLD THE DAMN PHONE. This is another Vanessa Hudgens vehicle (so glad she got into Christmas films), but instead of playing two separate people like she did in the original Princess Switch — wherein she plays both a baker from Chicago and a princess from a fake European city who look identical and switch places during a bake-off in that town to walk a mile in each other's shoes, and also help the princess avoid an unwanted marriage to a prince-type guy...who the baker ends up falling in love with — she now plays three different V. Hudges. This is some fuckery. From what I can glean from the trailer, the Chicago-baker Hudgens, named Stacy in the film (and now married to that prince guy), goes back to the European town for the coronation of Duchess Margaret, who had been in love with Stacy's baker BFF, but they broke things off. So Stacy brings her BFF to the coronation to see if he and Margaret can rekindle things. Stacy and Margaret switch again to give her more time alone with the baker BFF. WELL. Turns out there's a third goddamn Vanessa Hudgens, Margaret's cousin — who looks just like her but is blonde and slightly Evil Queenish — who wants a switch of her own...to take the throne. Drama ensues, as well as various romantic entanglements.

I'm skipping this because it is an animated film about an alien that looks like you drew it on your 9th-grade notebook. I will also now skip any other non-romcoms.

Dolly Parton’s Christmas on the Square

JK. I'm not skipping Dolly. Ok. Dolly plays a Christmas angel (of course she does) in this musical (with 14 original songs) starring Christine Baranski, Jenifer Lewis and Treat Williams. Baranski is a Scrooge and Dolly tries show her the true meaning of Christmas, I assume by being Dolly. (Parton, a literal angel, also funded the Moderna COVID vaccine. And she didn't even know it.)

This is a sequel to The Christmas Chronicles, starring Kurt Russell, Goldie Hawn and Darby Camp. I'm just going to provide the Netflix description, because it sounds great: "It’s been two years since siblings Kate (Darby Camp) and Teddy Pierce (Judah Lewis) saved Christmas, and a lot has changed. Kate, now a cynical teenager, is reluctantly spending Christmas in Cancun with her mom’s new boyfriend and his son Jack (Jahzir Bruno). Unwilling to accept this new version of her family, Kate decides to run away. But when a mysterious, magical troublemaker named Belsnickel (editor's note: Julian Dennison aka that Kiwi kid from Deadpool 2) threatens to destroy the North Pole and end Christmas for good, Kate and Jack are unexpectedly pulled into a new adventure with Santa Claus (Kurt Russell)." Sign me up.

From Shonda Rhimes comes this film following the students of the Debbie Allen Dance Academy as they work to put on their annual production of The Nutcracker. Not a romcom.

This seems to be another animated thing. 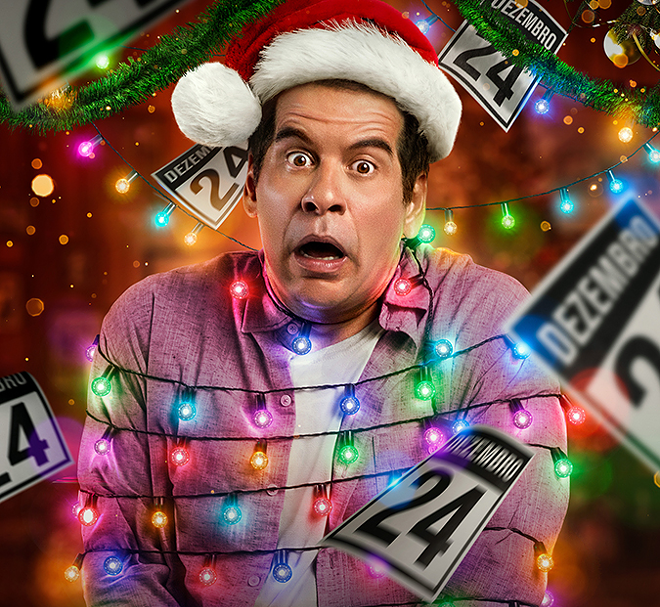 A guy named Jorge is a grinchy family man who is stuck in Christmas forever. It's like Groundhog Day except he appears to black out for the rest of the year and only wake up on the following Christmas? This seems like a horror film and not a romcom. Per Netflix, "He soon realizes that he’s doomed to keep waking up on Christmas Eve after Christmas Eve, having to deal with the aftermath of what his other self has done the other 364 days of the year."

So, if you're in need of other Christmas movie recommendations, I have some of my all-time favorites at citybeat.com. Please do not skip How Sarah Got Her Wings — it's a ghost love one.