This endearing Playhouse production, onstage through Feb. 19, will grow on 'Little Shop' fans old and new. 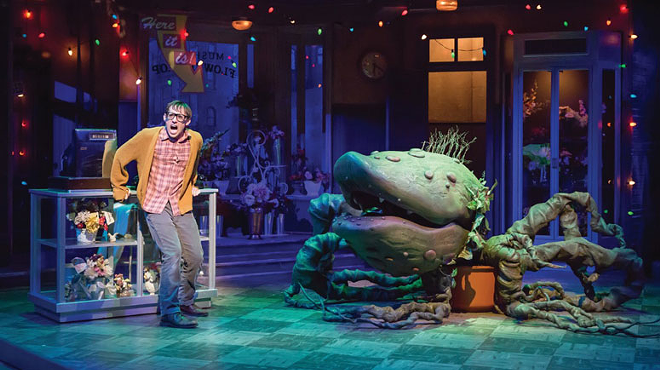 Photo: Mikki Schaffner Photography
Nick Cearley as Seymour, with Audrey II carnivorous plant
Flashes of lightning and thunder. Then a girl group resembling the Shirelles, Pop queens from the early 1960s, opens Little Shop of Horrors in the Cincinnati Playhouse’s Marx Theatre. “Call a cop,” they sing. “Shing-a-ling/What a creepy thing to be happening!/Feel the sturm and drang in the air/Sha-la-la/Stop right where you are, don’t move a thing.”

It’s a warning about dire things to come. And an overt signal that this is a very tongue-in-cheek piece of theater. Director Bill Fennelly didn’t need to do a lot of fancy tricks to make Little Shop work — it’s a well-oiled comedy machine, featuring clever tunes by Howard Ashman and Alan Menken, the lyricist and composer of animated movies including The Little Mermaid, Aladdin and Beauty and the Beast.

Roger Corman’s 1960 low-budget horror film about a carnivorous plant from outer space, bent on world domination, was the inspiration for the “horror comedy Rock musical” that had a five-year run Off-Broadway starting in 1982. It was a popular movie in 1986, the same year Cincinnati Playhouse first staged it. This co-production with Portland Center Stage had a run in Oregon late last year with the same cast, staged by Broadway veteran Fennelly. That means its accomplished cast is solidly polished.

The girl group — Chiffon (Johari Nandi), Crystal (Alexis Tidwell) and Ronnette (Ebony Blake) — sings backup throughout the show with tightly synchronized choreography. They also function as a latter-day Greek chorus, stepping in and out of the action as street kids on Skid Row, where Mr. Mushnik’s Flower Shop is on the brink of failure. Cranky Mushnik (David Meyers) is about to throw in the towel when his inept assistant Seymour Krelborn (Nick Cearley) brings forth an exotic plant he’s been tending, hoping to impress Audrey (Gina Milo), the shop’s ditzy blonde salesgirl. As a sign of affection, he’s dubbed the plant Audrey II, and it spells surprising success for the seedy shop.

Seymour soon discovers that his plant thrives on human blood and makes increasingly obnoxious demands for more as it grows rapidly. (The alligatorish monster is a larger-than-life puppet operated by Stephen Kriz Gardner and given an insistent, jive singing and speaking voice by Chaz Rose.) Seymour enters a Faustian agreement with the plant to feed its horrific appetite in exchange for fame and love with Audrey. Of course, things go badly.

Jamison Stern ramps up the humor with a dizzying array of comic roles. Most noteworthy is Orin, Audrey’s sadistic dentist boyfriend, as well as Audrey II’s first serious meal. But Stern comes back repeatedly as a hilarious array of people seeking to jump on Seymour’s epic publicity bandwagon resulting from the plant overtaking the entire flower shop.

Cearley is a magnificent dweeb, a clumsy but lovable klutz whose yearning for Audrey is palpable. They’re a perfect match, both singularly lacking in self-esteem. Milo’s stupifyingly blonde, empty-headed portrait is downright endearing, especially when she sings “Somewhere That’s Green,” her modest dream of what a wonderful life might hold.

When they finally confess their mutual attraction in “Suddenly Seymour,” Cearley stumbles over his name with a long, sibilant “s” — underscoring his disbelief that his dream of a life with Audrey could be coming true. Cearley plays Seymour with an array of vocal and physical tics that add humor to his performance. It’s all the more amusing that he’s a great singer, and his duets with Milo evoke the show’s warmest audience responses.

The offstage band, led by the accomplished local conductor Stephen Goers in his Playhouse debut, and Ashman’s literate lyrics that often surprise with their sudden clever and unexpected rhymes, make Little Shop a very satisfying, well-integrated production. Kent Zimmerman’s choreography, especially the stylized moves by the girls, adds even more polish. Michael Schweikardt designed the two-story set with the rundown flower shop that slides forward when needed and recedes for other action.

The Playhouse’s production of this campy morality tale — the price of fame is simultaneously tough, heartbreaking and darkly entertaining — is going to warm up a lot of audiences during a chilly January and February. Even if you’ve seen the show before, this Little Shop will grow on you.