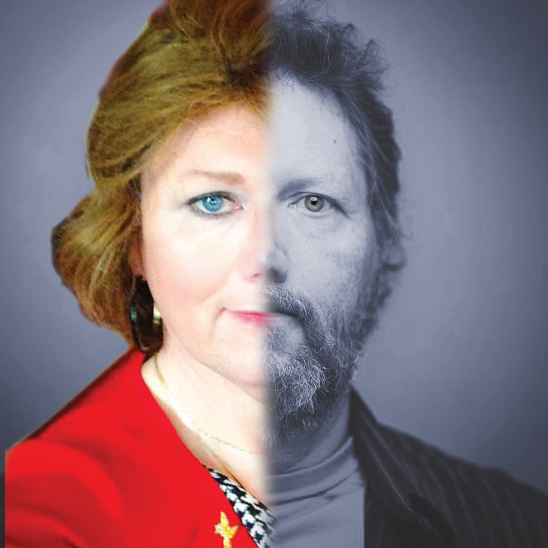 Spy in the House of Men is a heartfelt, comedic confessional. It's written and performed by New York’s Penny Sterling, a transgender artist whose ability to guide the audience through her life’s story is profoundly sophisticated. Sterling’s talent is in subverting expectations while garnering a lot of serious laughs.

Are you a social justice warrior who’s an ally to the LGBTTQQIAAP community who can recite from memory what each of the letters in that acronym stands for? Sterling has something to teach you. Are you of the opinion that your genitals determine your gender at birth? Tickets, please.

“Dressing in women’s clothes wasn’t a fetish or a costume,” Sterling says in her performance, “but a much more accurate representation of who I was. Admitting I’m transgender doesn’t ‘solve’ any of my problems. It just stops me from lying about one aspect of myself.”

Sterling’s show is playful and elegant. Masterfully composed, the lines she delivers are natural and packed with amusement. She’s not preachy, nor is her story manipulative. There’s much insight to be gained from Spy in the House of Men. This is a friendly, brutally honest performance that doesn’t outright damn any walk of life. Sterling throws aside the glitz and glamour facade of her life as a transgender and wears a simple dress and sweater, not unlike anything she’d likely wear to church.

The set is a simple kitchen table and chair, a telephone and a cup of coffee. There is some mixed media including a projection screen and audio, but the majority of the focus is on Penny Sterling — a name she came by while talking with someone decades ago:

“My drag name, she explained to me, was the name of my first pet, combined with the street I grew up on,” she says. “I’ll pause a moment while you all think about what your drag name is, because you know you are.”

For a show that tackles some heavy topics, there’s so much joy in Sterling’s performance. Her comedic timing is impeccable. Her sharp wit is wielded like an axe in a forest of self-doubt and opposition. In today’s political and cultural environment, it’s good to find humor in life while still taking a serious assessment of your values and how they affect those around you.

However you interpret a woman like Sterling, there’s something to be learned from Spy in the House of Men. Sterling has gracefully found humor and wisdom in her tribulations.