'Dinosaurs of Antarctica' Have Descended on the Cincinnati Museum Center

The Dinosaurs of Antarctica exhibit takes guests 200 million years back in time. 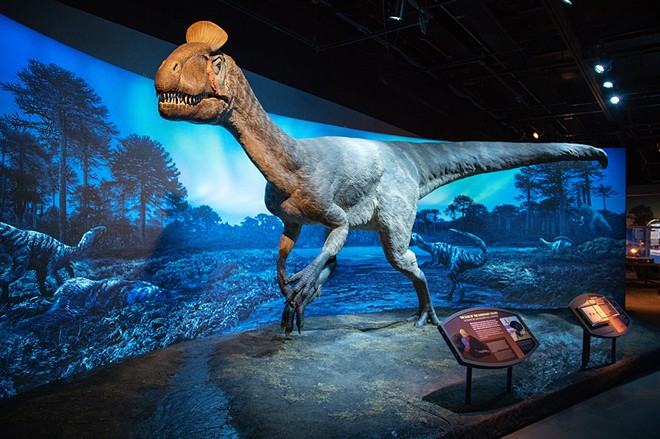 Step back 200 million years in time to the prehistoric Antarctic at the Cincinnati Museum Center.

The museum’s newest exhibit, Dinosaurs of Antarctica, takes guests on a journey not to an icy landscape, but to a verdant and tropical one. Back then, Antarctica was covered in swamps, seas and warm forests as part of the supercontinent Gondwana.

The exhibit includes life-sized recreations of dinosaurs, like the 25-foot-long crested Cryolophosaurus in its native habitat, backdropped by the aurora australis (aka southern lights).

There are also artifacts and tools from expeditions, some from 1910, as well as fossils and skeletons.

“Dinosaurs of Antarctica pulls back the curtain on the process of scientific exploration,” says Dave Duszynski, vice president of featured experiences at Cincinnati Museum Center, in a release. “The dinosaurs themselves garner a lot of attention, but the daring and difficulty of even modern-day Antarctic exploration captivates you.”

The OMNIMAX film Dinosaurs of Antarctica is a complement to the show (and ticketed separately).

The companion movie takes viewers through the point-of-view of various dinosaurs, who use night vision to hunt prey, as well as modern-day scientists in Antarctica "as they explore what's left of ancient Gondwana and attempt to predict how human-driven climate change may impact our planet," per a description.

“It’s rare that an exhibition and OMNIMAX® film pair together so perfectly, creating experiences that build on and enrich each other,” Duszynski says. “Together, they have the power to immerse you in the prehistoric Antarctic environment and to bring it to life in dazzling detail.”

Get a preview of the exhibit below: