Discover a Softer Side of the Gun Debate 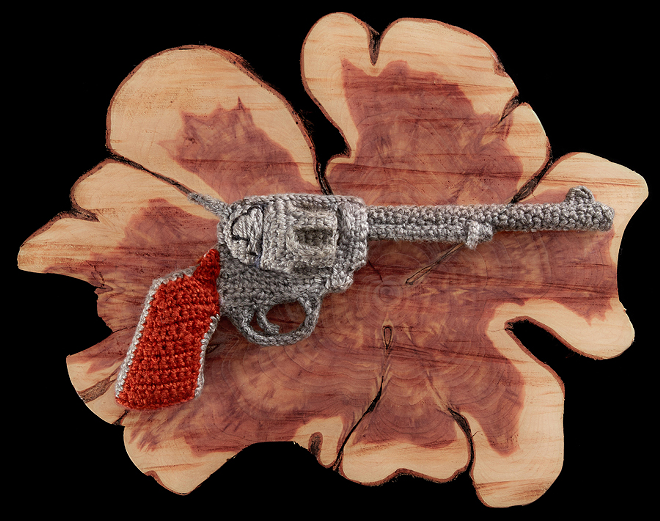 PHOTO: Rob Wolpert
Crocheted “Peacemaker” in A Loaded Conversation
The National Rifle Association’s American Rifleman magazine once published a story with the headline “Happiness is a warm gun,” which inspired a famous Beatles song. And maybe creative solutions to violence start with a warm and fuzzy gun. By presenting iconic firearms in a soft and approachable format, fiber artist Jen Edwards hopes she can “disarm” people of their most polarizing views about the Second Amendment and encourage more productive discussions.

Edwards makes crocheted guns with exacting detail but says she’s not a gun enthusiast. She’s upset about the massacre in Las Vegas, and she doesn’t align with any side in the nation’s gun-control debate. Instead, the artist says she wants to be completely nonbiased and hear everybody’s opinions during A Loaded Conversation, her solo exhibit that opens Friday at the Clifton Cultural Arts Center.

“Yelling at each other on Facebook with solutions — that’s not working,” Edwards says.

She has included movable parts in several of her yarn works to encourage visitors to interact with them at the opening. The cylinder pulls out of the Smith & Wesson Model 29, also known as Dirty Harry’s gun. A silencer comes off James Bond’s Walther PPK. The Glock 19 has a removable clip.

For those afraid of guns, handling a crocheted weapon or even shooting a real one in a controlled environment is a chance to better “know thy enemy,” Edwards says.

“Instead of just saying that guns are bad, you should really understand why you think they’re bad,” she says.

Likewise, can supporters of the Second Amendment explain why  guns are good?

Edwards, a founding member of the yarn graffiti group Bombshells of Cincinnati, crocheted 15 pistols and rifles for this exhibit, fashioning them around squishy foam, plastic mesh and dowels. She spent 30 to 65 hours on each, not including her historical research. “When I don’t have a very good understanding of something, I really want to delve into it,” she says.

The CCAC exhibit is Edwards’ prize for winning Best in Show at the center’s 2016 The Golden Ticket juried art exhibit for her fiber-art Kentucky long rifle. Her curiosity about firearms started when she crocheted a version of her boyfriend’s heirloom shotgun for Hunting Season, a 2012 show she curated at the Thompson House Shooting Gallery in Newport. She next made a couple guns for the Secret ArtWorks fundraiser and realized she’d stumbled into some interesting and seemingly unlimited subject matter.

She has divided the firearms into broad categories, like home protection, hunting, the military and cinema. There’s a bit of sparkle in the pearl-colored yarn of her Remington Derringer, the first gun that women started carrying because it’s so small. Her personal favorite is the ironically named Colt SAA “Peacemaker.”

“This is considered the ‘Gun That Won the West,’ so take that for what you will. It was a very utilitarian gun. It wasn’t used in war, but more for protection, and if you needed dinner,” Edwards says. “There’s a lot of violence that went with that gun, but there is a lot of perseverance because of this gun. It embodies every bit of the argument that I think everyone should be having.”

The weirdest — and scariest — weapon in Edwards’ crocheted cache might be her version of a plastic 2013 Liberator, the first digitally printed gun. When Defense Distributed, a firm founded by a libertarian/anarchist, introduced the 3-D patterns for this new kind of homemade “zip gun” four years ago, more than 100,000 people downloaded them off the internet.

So how can the nation adopt limits that ensure that a tragedy like the Las Vegas massacre doesn’t happen again?

“It’s a hard conversation. You can’t fix it in a Facebook post,” she says.  Or in an art show, she acknowledges. But she likes to think it’s a first step.