Disney’s 'Jungle Cruise' is a Batshit Crazy, But Watchable, Disaster

If nothing else, "Jungle Cruise" is the best, most batshit attempt to mash together "Indiana Jones and the Temple of Doom," "Romancing the Stone" and "Avatar" that you’ve ever seen. 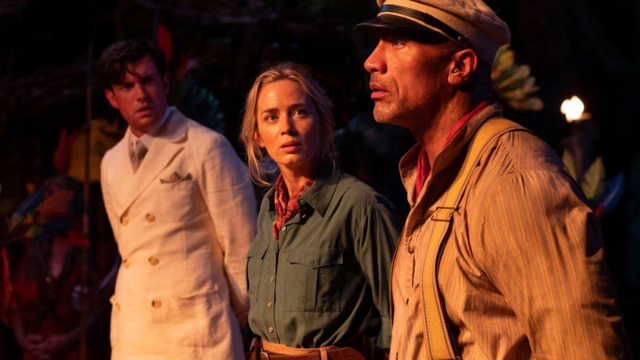 To fully understand and appreciate the demented, fuck-all phantasmagoria that is Disney’s latest beloved ride-to-feature film effort, Jungle Cruise, one has to go back 42 years to The Black Hole.

Similarly, Jungle Cruise would seem custom-crafted by the Mouse House’s bean counters to deliver thrills and the occasional mild chill to prepubescent kids and their Disney-fanatical parents, much like the beloved theme park ride itself.

And while there are such moments of too-cute CGI animals doing stupid-cute things sandwiched between some rousing action sequences, the truth is that Jungle Cruise is considerably less kid-friendly than you might expect.

In fact, there’s a healthy smattering of surprisingly risqué dialogue, an extended flashback filled with dark, overtly mature menace (accompanied by a fantastic orchestral version of a Metallica classic), a tender coming-out story featuring a main character who never utters the word "gay," and a murderous, psychotic Nazi as the main villain.

If nothing else, Jungle Cruise is the best, most batshit attempt to mash together Indiana Jones and the Temple of Doom, Romancing the Stone and Avatar that you’ve ever seen. 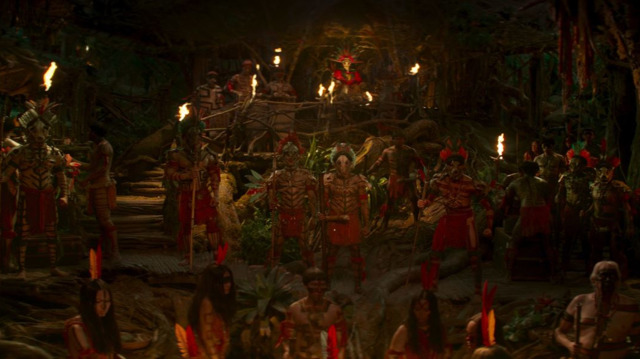 Photo: DISNEY ENTERPRISES, INC.
Hands down, the best part of "Jungle Cruise" is watching its spot-on homage to "Indiana Jones and the Temple of Doom"

That doesn’t mean the end result is particularly good, but good lord almighty, it’s a hoot and a holler to try and absorb in one sitting.

When it works, which is pretty much early on, for the first hour or so, Jungle Cruise feels like a modern spin on the serialized adventure shorts that used to be a staple at movie houses through the 1950s.

Director Jaume Collet-Serra, arguably an odd choice for a big-budget, family-friendly adventure flick, having helmed a slasher (House of Wax), an evil kid thriller (Orphan), a bloody shark survival thriller (The Shallows) and four (!?!) Liam Neeson action movies, does a great job with all the backstory, as well as establishing Emily Blunt’s Dr. Lily Houghton as a formidable and crafty female protagonist and Dwayne Johnson’s Frank Wolff as a crusty, crafty con artist-cum-boat captain.

And, at least early on, Jungle Cruise seems to be having a wicked time playing up its female-centric thrust by having Houghton repeatedly reminded that she’s a woman acting like a man in 1916 all because she dares to wear trousers instead of a skirt.

Wolff even nicknames her ‘Pants,’ which is both endearing and hilarious.

Houghton, her brother MacGregor (Jack Whitehall) and Wolff are all searching for the same thing — an amulet that will help them locate the mythical Tears of the Moon, an ancient tree whose blossoms are believed to hold amazing powers to restore life, break curses and cure all disease.

Also seeking the Tears of the Moon is Prince Joachim (Jesse Plemons), a dastardly Nazi with a penchant for killing indiscriminately while cruising the Amazon in a German submarine.

It’s fair to say that Plemons is basically Schell’s Dr. Hans Reinhardt from The Black Hole, if Reinhardt was high on poppers and had his volume knob cranked to 11.

Seriously, it’s like Plemons parachutes in occasionally from a completely different movie, if that movie was some long-lost Mel Brooks homage to the Coen Brothers. He’s riveting to watch, even if you have no idea why the hell there’s a murderous, psychotic Nazi in an allegedly kid-friendly Disney movie.

There’s also a love story between Houghton and Wolff that becomes more and more ridiculous as Jungle Cruise progresses.

Did I mention that there’s also an entire cadre of CGI conquistadors straight out of Pirates of the Caribbean? As soon as they get introduced, shortly before the extended homage to Temple of Doom, you realize that Collet-Serra either willfully chose or was forced to adopt a kitchen-sink-and-then-some approach to checking off every possible big-budget box.

Sadly, the over-the-top CGI also is spotty as hell, and the whiplash feeling you get during the more grueling and interminable action sequences in the third act only reinforces the fact that you are watching a Disney movie that was so distracted by its potential to make millions that it forgot to just tell a good story.

I hope and pray that someday we might get to see a streamlined version of Jungle Cruise that eschews the conquistadors, ditches the CGI animals and focuses squarely on Houghton’s quest to find the Tears of the Moon and deny Prince Joachim the opportunity to use its restorative powers for nefarious purposes.

That cut would likely resemble a wild cross between The African Queen and Raiders of the Lost Ark, and I would be all-in to watch it on repeat.