Two shots. That’s all it takes for Anne Hathaway to deliver what could arguably be the greatest performance in movie musical history. 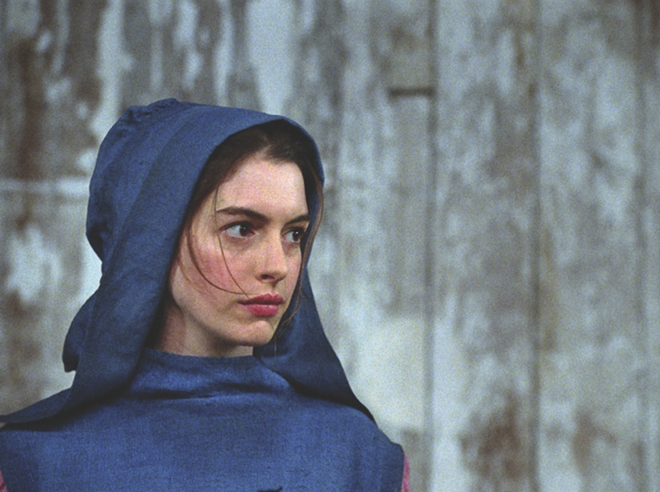 Two shots. That’s all it takes for Anne Hathaway to deliver what could arguably be the greatest performance in movie musical history.

Of the many miserable characters in Les Miserables — Tom Hooper’s eagerly anticipated big screen adaption of the 1980s blockbuster Broadway musical about a failed French uprising in the early 19th century — Fantine (Hathaway) might be the most miserable. And she’s given precious little time to deal with the misery. We meet her in a factory where she’s tormented by her co-workers and her handsy foreman. After a quick turn of events, she’s on the street selling her body — literally — to make ends meet.

It’s directly after a tryst with a sailor that Hathaway delivers her knock-out blow. She’s still laying on her back as we hear the first strains of “I Dreamed a Dream,” one of the many mournful and memorable ballads from the show. Hathaway sings exactly eight measures in that first shot, concluding in the song’s prelude, “There was a time when love was blind and the world was a song and the song was exciting. There was a time, then it all went wrong.”

Hathaway sits up and moves to the edge of the bed. Cut to a close-up with Hathaway filling the right third of the frame. It’s a framing choice Hooper and his director of photography will make several dozen more times over the course of the film. Lucky for Hathaway, she appears early in the movie before the style gets tiresome.

It helps that Hathaway owns the frame. Over her career, from The Princess Diaries to The Devil Wears Prada, the camera has always loved Hathaway’s expressive face and doe eyes. Yet even as a woman living with Parkinson’s disease in Love and Other Drugs, Hathaway kept her character’s vulnerability almost out of view, preferring instead to show the character’s strength and resolve winning the battle during most scenes.

In Les Miserables, in that moment, Hathaway brings the vulnerability front and center. She beautifully and tearfully laments her life, her choices and the awful luck that has befallen her. With a performance that compelling, Hooper dared not cut away. The rest of the song, after that first cut, is one long shot of Hathaway’s exposed face.

While certainly flawed, Hooper’s film manages to do one thing extraordinarily well: it pays homage less to Victor Hugo’s book on which the musical was based and more on the stage adaptation. It lets its actors perform and doesn’t interrupt them with cinematic tricks. Broadway performers don’t have the luxury of quick edits and wide shots to cover their flaws. Neither should his cast.

Hooper also makes the ground-breaking choice to let his cast sing live on set. Other movie musicals have dabbled with this technique — to mixed success — but not on this scale. It makes Hathaway’s performance even more noteworthy: one song, performed in two shots with entirely live singing. Every breath, every desperate tear was real and not lip synched to a recording done months before principal photography began.

With this in mind, it’s hard to favorably compare any previous movie musical performance to Hathaway’s in Les Mis.

Catherine Zeta-Jones’ Oscar-winning turn as Velma Kelly in Chicago? Solid, to be sure. But it was likely the Academy’s way to reward the entire cast for Rob Marshall’s musical renaissance rather than a recognition of one great performance.

John Travolta in Grease? Hard to argue against the original JT’s star turn. He fearlessly dove into the silliness of the project and elevated it from camp to cinematic joy. But let’s be clear about the emotional differences of the two projects: if Les Mis is a 20-ounce steak, Grease is a SweeTart.

Old-school movie musical fans will be quick to point to the powerhouse performances of Liza Minnelli in Cabaret, Rita Moreno in West Side Story or, well, anything in the Julie Andrews catalog. Does Hathaway really stack up to the legends of movie musical history?

In a word, yes. There has been no performance more emotionally raw, vocally strong and perfectly suited for its film than what Hathaway brings to Les Miserables. And remember: this was in the same year that she successfully purred her way into Batman’s heart as Catwoman in The Dark Knight Rises.

When has Julie Andrews shown that range?