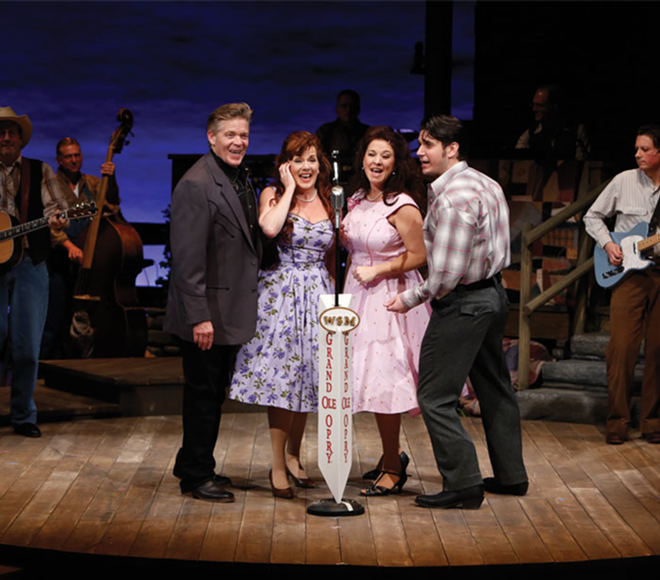 In the same sense that it takes a village to raise a child, it appears that it takes a crowd to tell the story of Johnny Cash. At least that’s the case with the Cincinnati Playhouse in the Park’s production of Ring of Fire: The Music of Johnny Cash. (It will be presented on the Robert S. Marx stage through Feb. 15.) Jason Edwards is the driving force behind the show — conceived by William Meade, created and originally directed by Richard Maltby Jr. — as its director and one of 10 onstage singers and musicians. He’s adamant that he’s not portraying the Man in Black.


“We stayed away from the Vegas idea of impersonation,” Edwards says.

“That would be good for about three songs,” he adds, laughing. “I certainly don’t look like Johnny Cash.”

Instead he recruited excellent singers and musicians to authentically recreate the music for which Cash became known. He’s assembled veteran players who use keyboard, fiddle, guitars, dobro, mandolin, harmonica, upright bass and drums. Most of them also act, playing small parts to tell Cash’s multifaceted story. Despite the fact that Edwards performed in the show’s first incarnation, a Broadway production in 2006, he’s a humble guy, quick to say the success of the show is due entirely to his collaboration with others. It’s almost as if his fellow singers and players are indulging him with their presence. He’s polite and self-effacing, speaking of the legendary singer and songwriter with reverence and respect. In fact, he frequently calls him “Mr. Cash.”

Edwards began his engagement with this material nearly a decade ago on Broadway, a slicker version of what’s onstage at the Playhouse.

“Audiences loved it on Broadway,” he says, “but critics were lukewarm. It’s a different kind of concept.”

Some dismissed the show as a “jukebox musical,” but Edwards says that’s not accurate. “There are a lot of songs in this show that were definitely not on the radio,” he says.

When Playhouse Artistic Director Blake Robison announced the show as part of the 2014-2015 season, he said that Edwards received permission from its creator, Richard Maltby Jr., to do a new, pared-down version.

“There’s a lot of stories about how Cash came up in the world and battled his demons,” Robison said, “using actors who step in and out of playing an older and younger Johnny and June Carter, Cash’s wife. Storytelling happens through the songs and vignettes and scenes around the songs. This treatment is leaner and meaner and grittier than what was on Broadway.”

After Broadway, Edwards had the opportunity to stage Ring of Fire in Southern California, but needed it to be a smaller ensemble. He spent nearly a year stripping it down. “My goal was to get it closer to the Johnny Cash sound,” he says.

He held fast to Maltby’s concept, which avoided literally putting Cash onstage. Instead, the show recreates his career through his music with four singers who play many people — including Cash’s family members and loved ones. Together they sing more than 30 classic numbers that Cash recorded, including familiar tunes such as “Folsom Prison Blues,” “A Boy Named Sue,” “I Walk the Line” and “Ring of Fire,” but also lesser known numbers like “Straight A’s in Love,” “Dirty Old Egg-Suckin’ Dog” and “Flushed from the Bathroom of Your Heart.”

Cash recorded more than 1,600 songs, his own and tunes by others, during his five-decade career. (He died in 2003.) But Edwards says the song that most captures the essence of Cash’s character is “The Man in Black.” Cash wrote these lyrics: “I wear the black for the poor and the beaten down/Livin’ in the hopeless, hungry side of town/I wear it for the prisoner who is long paid for his crime/But is there because he’s a victim of the times.”

Edwards has worked hard to present Cash’s downhome but heartfelt philosophy. “Some of the stuff he wrote is truly profound. The music and the sound of it just draws you in,” he says.

“This ‘outlaw country’ label he got as a musician and an actor is just part of who he was,” he continues. “Some of his writing is like downhome Shakespeare. In fact, I think Shakespeare would have loved Johnny Cash.”

The singer was both patriotic and spiritual, Edwards points out. “When he first went to Sun Studios, he considered himself a Gospel singer, and he later sang with Gospel quartets. In fact, he performed with Rev. Billy Graham. They were good friends, cut from the same cloth. One became a preacher, one became a singer.”

Edwards grew up in North Carolina and saw Cash perform in a concert in the Charlotte Coliseum in 1969. “My parents played cards regularly with friends in Charlotte,” he says. “They’d find things for me to do, to get me out of the way, I guess. One night they dropped me at the hall, where a guy met me at the door and escorted me to my seat, eighth row, center. The Statler Brothers were up first, then Carl Perkins. And then it was the ‘Man in Black.’ I still have the program from that evening. It certainly turned me on to him and his music.”

Ring of Fire’s two acts take audiences through Cash’s life in chronological order, starting with his family’s early years on a hardscrabble Arkansas farm, picking cotton and singing with his parents and siblings. It moves to his early years as a breakout performer, and eventually to Nashville, Tenn.’s Grand Ole Opry. It doesn’t shy away from his wild behavior and substance abuse, but it puts those elements in context with his prime years and his engagement in important social issues of the day, especially prison reform.

Edwards just finished performing Ring of Fire at the Repertory Theatre of St. Louis, which co-produced this rendition with the Playhouse.

RING OF FIRE: THE MUSIC OF JOHNNY CASH, presented by Cincinnati Playhouse in the Park, continues through Feb. 15. Tickets and more info: cincyplay.com.
Scroll to read more Theater articles