The Weston Art Gallery will celebrate the 30th anniversary of Andrew Leicester's iconic sculpture, which harkens back to when Cincinnati was known as “Porkopolis" 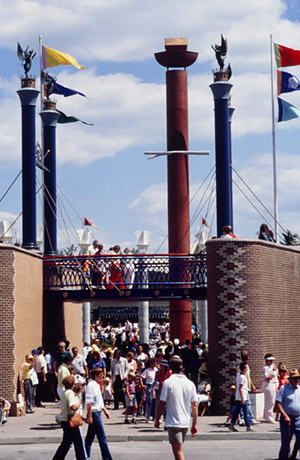 In 1988, Cincinnati celebrated its 200th anniversary with the construction of the 22-acre Bicentennial Commons at Sawyer Point along the Ohio River. When the commons were dedicated to the city’s citizens on June 4 of that year, the first Cincinnatians to enter the park already knew what they’d find there. The “Cincinnati Gateway” sculpture at the park’s entrance had been hotly debated in the months prior, but now it stood as the shining beacon of a proud Midwestern city. Marking the entrance to the park were four riverboat smokestacks. Out of those bronze towers rose a host of triumphant, winged pigs ready to take flight into the air above.

The Weston Art Gallery will celebrate the 30th anniversary of this iconic sculpture — and the Minneapolis-based artist who made pigs fly — in the new exhibition Andrew Leicester: Cincinnati Gateway Revisited, which opens at 6 p.m. Friday, June 28. Noted art historian Erika Doss will present a free lecture in conversation with Leicester on Sunday at the 21c Museum Hotel.

The sculpture is deeply rooted in the history of Cincinnati and harkens back to when the city was known as “Porkopolis.” As the largest pork packer in the world, pigs ruled the Queen City and the rest of the world took note.

“Several European writers who came to visit Cincinnati complained about the god-awful smell and the waste,” Leicester says over the phone. “The pigs were roaming free in the streets.”

“Cincinnati Gateway” is in the same spot where the Miami-Erie Canal once connected Lake Erie to the Ohio River. The canal came through the northern part of Cincinnati, making its way down Central Avenue and turning right on Eggleston Avenue before flowing out into the river.

“At the top of Eggleston (Avenue) were a large number of slaughterhouses along the canal,” Leicester says. “They would tip all the blood and the offal from the day’s proceedings into the canal. So the canal was literally red with the blood of these thousands of pigs. It got the nickname ‘The Red River.’ ”

“The early prosperity of Cincinnati really hinges on the poor little pig,” he continues.

So Leicester decided that the “Cincinnati Gateway” should honor the animal that made the city famous.

“Popping out of the top are the spirits of the dead pigs with their angelic wings, standing on their hind legs, and they’re singing the ‘Hallelujah’ chorus to all their dead brethren,” he says.

Not everyone agreed that it was the best way to represent Cincinnati.

“There were some people on the (city) council that felt that highlighting this early prominence of the city with a pig didn’t fit with their idea of trying to brand Cincinnati as a high-tech city,” he says.

The highly publicized debate over the pigs resulted in a public hearing at city hall. Fierce supporters of the sculpture wore pig snouts and brought in piglets under their arms. Councilman David Mann even brought in a pig from the Cincinnati Zoo in a show of support.

In the end, the pigs prevailed.

“I never thought there’d be a referendum on it,” Leicester says. “It was a wonderful thing to witness. It was like the story of the ugly duckling. It was accepted by everybody. All the stores in town started selling flying pig paraphernalia.”

“It’s still something that people cherish,” he continues. “It’s a real thrill to see a public artwork having that kind of longevity and being kind of embedded in the history of Cincinnati. It’s a quirky picture — the flying pig — but it was born from the history of the city.”

Looking at it now, you’d never guess “Cincinnati Gateway” almost never stood. Fiberglass winged pigs still decorate many of the city’s street corners, and the farm animal was immortalized by the start of the Flying Pig Marathon in 1999. Three decades later, Leicester hopes that the exhibition will remind Cincinnatians of the sculpture’s legacy.

“It’s gradually showing its age, but there’s still time to fix it” he says. “It needs a coat of paint in some areas. The smokestacks have faded… Like most outdoor public sculpture, this project is subject to the elements, and it’s been there a long time. It needs some tender love and care. I’m hoping that this exhibition will remind people of its value.”