Each of these plays would be well-received in Cincinnati. I’d welcome the chance to see them again. 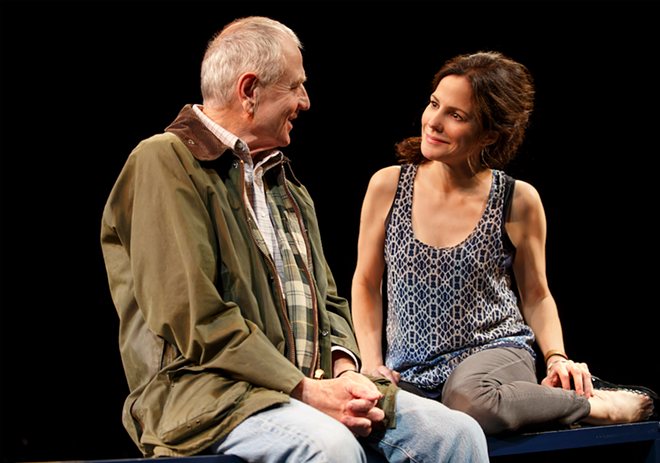 In late October, I spent three days in New York City with the American Theatre Critics Association. My trip enabled me to attend four plays, two on Broadway and two off-Broadway.

Despite its title, Simon Stephens’ Heisenberg is not about the German physicist who defined the uncertainty principle. But it is about unexpected outcomes. Stephens’ Curious Incident of the Dog in the Night-Time was the 2015 Tony winner, a show I enjoyed for its theatrical creativity and vivid characters. Heisenberg has none of that show’s whiz-bang scenic design or special effects. In fact, it’s bare-bones low budget: Two tables, two chairs and two actors. That’s it.

But oh, my, what actors. I was drawn to Heisenberg because it features Mary-Louise Parker, who I first saw on Broadway 16 years ago in another Manhattan Theatre Club production, David Auburn’s Proof, a role for which she won a Tony. She’s been a quirky presence in film and TV (Angels in America, Weeds) for years, and I’ve always been intrigued by her acting.

She could pick up another Tony nomination next spring for her performance as Georgie, a free-spirited, oddly blunt woman who, at 43, sets her sights on Alex, 75, a charming but reclusive butcher. Her motives are mixed, but the unlikely emotional arc of the relationship between Georgie and Alex, played by Denis Arndt (a veteran actor who’s new to Broadway) is both unexpected and a pleasure to witness. They are unsure about needing one another, but their truly human qualities win out — and a chance at happiness prevails.

The two-actor play was first performed in an intimate black box; now it’s moved to a traditional Broadway proscenium stage with regular audience seating faced by 200 more chairs on a steeply raked onstage platform, looking for all the world like the seating at Ensemble Theatre Cincinnati. Heisenberg would fit nicely into a local production at Ensemble Theatre. Manhattan Theatre Club has, in fact, originated numerous shows that ETC has subsequently premiered for Cincinnati audiences, from Full Gallop and Rabbit Hole to Good People and The Whipping Man.

Another very human play, Stephen Karam’s aptly titled The Humans, was the 2016 Tony Award winner. It portrays three generations of the Blake family assembling none too happily for Thanksgiving dinner. Grandmother is senile and babbles nonsense; mom and dad (stage veterans Reed Birney and Jayne Houdyshell, both 2016 Tony winners) snipe at one another and keep secrets; one daughter, a lesbian with health issues, is grieving the end of a relationship, while her younger sister Brigid (Sarah Steele, a familiar face from TV’s The Good Wife), hosting dinner in her odd apartment, has a new live-in boyfriend.

The Humans is a showcase of naturalistic ensemble acting, with touching, difficult and revelatory moments for each character. The play’s deeply emotional and heart-breaking interactions have held audiences’ attention for nearly a year. It’s achingly poignant, a play very much in the moment, yet suffused with universal feelings. 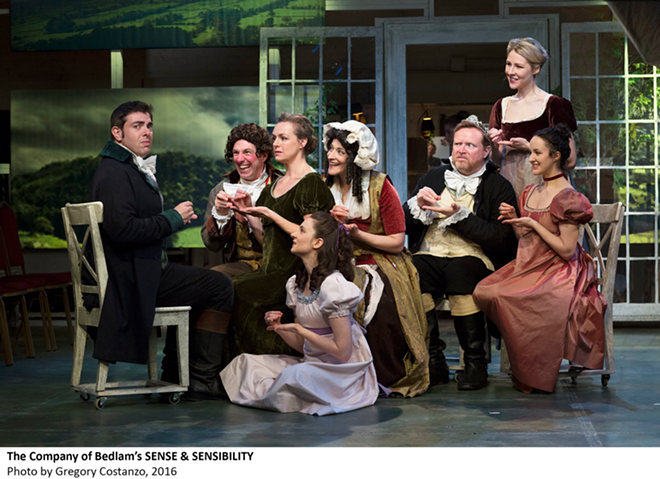 Photo: Gregory Costanzo, 2016
The Company of Bedlam's "Sense & Sensibility"
I also attended two off-Broadway productions: A theater company called Bedlam is staging a vivacious rendition of Jane Austen’s Sense and Sensibility, detailing the romantic challenges of the Dashwood sisters after their father’s death leaves them in difficult financial straits. Kate Hamill, who plays impetuous Marianne Dashwood, is also the script’s adapter. Director Eric Tucker has inventively used the Gym at Judson, a church gymnasium in Greenwich Village with the audience seated on two sides and a long performance lane in between. Furniture and set pieces on wheels are constantly in motion, often with actors on board. The high-spirited production employs 10 fine cast members playing multiple characters with remarkably self-aware humor and clear definition. It was two entertaining acts awash in energetically performed 18th-century manners and wit.
click to enlarge 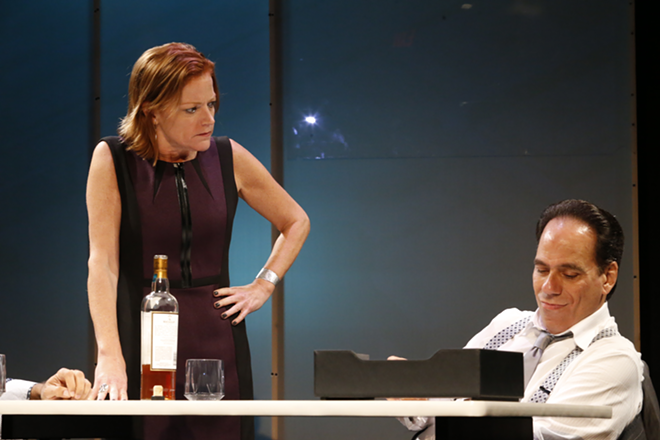 "What We're Up Against" by Theresa Rebeck
Finally, I caught the last performance of a brief off-Broadway run of What We’re Up Against, a 2010 script by Cincinnati native and respected New York playwright Theresa Rebeck. Life Force Arts, an organization committed to igniting conversation about vital contemporary issues, staged it at the June Havoc Theatre on West 36th Street. Eliza (Lesley McBurney) is a smart, assertive architect struggling to make her way in a testosterone-saturated firm. The title is a phrase uttered by Stu (Vince Bandille), a chauvinistic partner, as he bemoans dealing with a strong woman. Ironically, Rebeck’s script is actually about challenges faced by a woman in a contemporary workplace, sharply defined by this intensely acted production.

Each of these plays would be well-received in Cincinnati. I’d welcome the chance to see them again.