DAAP doesn’t yet offer a specific MFA degree in duct tape, but you have to wonder how soon before they do after seeing a current DAAP exhibition, Rise and Fall: Monumental Duct Tape Drawings by Joe Girandola. 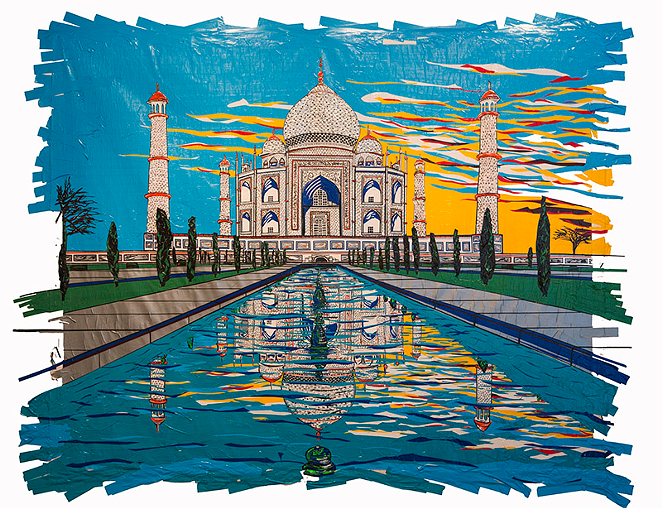 The School of Art at the University of Cincinnati’s College of Design, Architecture, Art and Planning doesn’t yet offer a specific MFA degree in duct tape, but you have to wonder how soon before they do after seeing a current DAAP exhibition, Rise and Fall: Monumental Duct Tape Drawings by Joe Girandola.

He is the new director of the MFA program in Fine Arts, as well as an associate sculpture professor recently arrived from Philadelphia’s University of the Arts. His show is on view at the Philip M. Meyers Jr. Memorial Gallery through March 31, and by all means you need to see it. Not just because you’ll be amazed at what artists can do with duct tape these days, but also to find out why they would want to.

That’s not really all that difficult a question to answer. First of all, duct tape – used to seal World War II ammunition cases — is available in a wide palette of strong, vivid colors. Girandola has a working relationship with Ohio’s ShurTech company, maker of Duck Brand tape as well as some industrial-use types.

Second, his work fits into the parameters of contemporary conceptual art — using unconventional materials that in some way comment on the object they are creating. At the Meyers Gallery show, he has created six large separate “drawings” of world monuments like Stonehenge, the Leaning Tower of Pisa, Taj Mahal and a Roman aqueduct. (The show was curated by Maiza Hixson, a curator at the Delaware Center for the Contemporary Arts and a former associate curator at Contemporary Arts Center.)

He is using a throwaway material to render images of world treasures, some from antiquity, as a way of getting us to think of preservation. Yes, we must save our greatest architectural treasures, but “preservation” — in this age of global warming and ecological destruction — also means finding new reuses and new respect for the mundane materials of everyday life.

“Monumental” is the right word for his work. His rendering of the Taj Mahal measures 120-by-108 inches. Like his other pieces, it was begun with preliminary drawings but you don’t really see this process in the finished work — just the duct tape, applied to canvas and coated with archival surfboard resin. At first, it looks like Girandola has created a mosaic, neatly layering bands of small, symmetrical gray tiles into the building’s domes and towers. For another piece, one depicting Pisa’s Leaning Tower, so much tape has been applied that it becomes a veritable relief. Yet, for all the massiveness, there is delicacy.

Girandola already is teaching a DAAP class in which students will cover large sculptures — of sunglasses, an arcade machine, a toy game and more — in duct tape and then display them at June’s annual Duct Tape Festival in Avon, Ohio (ShurTech’s home). And Girandola is looking for more buildings and sites to monumentalize in duct tape. Any suggestions?

Meanwhile, at the Dorothy W. and C. Lawson Reed Jr. Gallery inside DAAP through April 4 is a painting/collage show that brings our attention to a talented American Abstract-Expressionist, William McGee, who seems to have been undeservedly overlooked by history.

William McGee: Works 1954-1977 is a modest show in size, but it’s been very thoughtfully put together to provide an introductory overview. The paintings look especially good here. McGee at first favored darker or quieter colors set off by hard-edged lines that highlight geometry and symmetry as much as color.

With time, however, he softened those lines enough to earn comparisons to Rothko. And like Rothko, the more you contemplate the seemingly Minimalist work, the more ghosts of shapes you start to see inside the stronger color fields.

The show is a nice coup for curators Aaron Cowan, director of DAAP Galleries, and Vincent Sansalone, an assistant professor. McGee, who lived from 1925 to 1999, didn’t have much of a Cincinnati connection — he briefly taught at UC in the 1950s. But his history is fascinating. He was a prisoner of war during World War II, studied at University of New Mexico with Agnes Martin (and met fellow student Richard Diebenkorn) and then was a student at famed Black Mountain College near Asheville, N.C.

Two Cincinnati-area brothers who collect his work, Larry and Brian Huston, lent the material for the show. They also recently donated many McGees to the Miami University Art Museum. So hopefully we’ll be seeing more of him there soon.