Ed Stern “retired” three years ago after two decades of artistic leadership at the Cincinnati Playhouse in the Park. I put quotation marks around that word because he’s still busy as can be, much to the surprise of everyone — himself included. 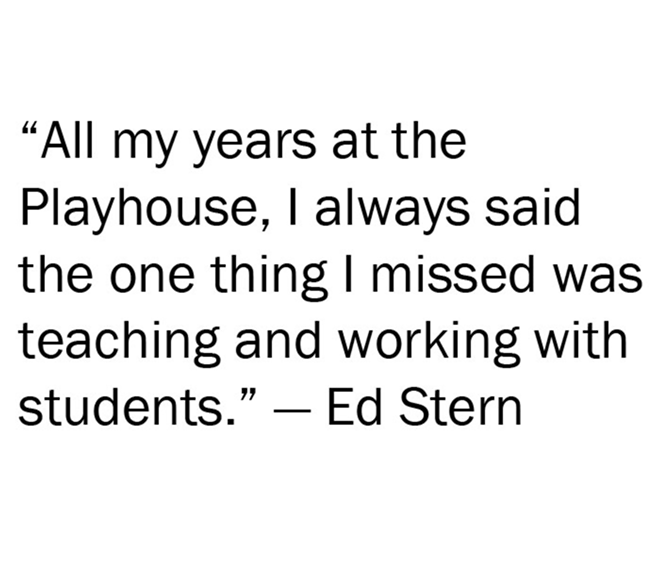 Ed Stern “retired” three years ago after two decades of artistic leadership at the Cincinnati Playhouse in the Park. I put quotation marks around that word because he’s still busy as can be, much to the surprise of everyone — himself included. Shortly after announcing his retirement, Stern was diagnosed with a type of cancer that’s typically terminal. He went through the hell of treatment and miraculously came out on the other side as vigorous as ever. Now, he’s doing a lot of guest directing, including an upcoming gig at Xavier University where he’s staging Kenneth Lonergan’s This is Our Youth in early December. Stern is approaching 70, and he’s completely energized by the current events of his life.

“All my years at the Playhouse, I always said the one thing I missed was teaching and working with students,” he tells me during a recent afternoon at Coffee Emporium. “I loved that when I was at Rutgers off and on for nine years. This fall I spent a week at the University of Virginia doing master classes in acting.” Earlier in the year he staged Love’s Labor’s Lost at Penn State and at the University of Missouri in Kansas City.

Stephen Skiles, once an acting intern at the Playhouse and today the head of XU’s new theater program, invited Stern to stage Lonergan’s three-character play.

“I like doing it at Xavier where it can be staged with actors who are the right ages,” Stern says. He saw the show’s original New York production in 1996 starring Mark Ruffalo, but he recalls that the actors were older. “They were probably in their late 20s, maybe 30,” he says. “Having that real youth onstage — there’s no pretense. I love that.”

Lonergan’s play is set in 1982 on Manhattan’s Upper West Side, where 19-year-old Dennis has an apartment. His angry friend Warren, also 19, has been banished from his family home by his abusive father and has stolen $15,000 on his way out. Jessica, another friend, gets caught up in the young men’s scheme to buy and sell cocaine.

“The trick with this play is these young people are being thrust into adulthood,” Stern says. “They want to have a cloak of invincibility; they don’t want to be vulnerable. And yet they can be hurt by parents, by friends. So there’s the dynamic of relationships — who is tougher, who is stronger.”

Although Lonergan’s play is about very young adults 30 years in the past, Stern says the issues facing almost-twentysomethings haven’t changed much. “At the age these kids are, two of the three really don’t know what they want to do with their lives,” he says. “When one of them, toward the end of the play, encounters death — someone he knew and abused — that shakes him to his core. He starts to realize that he hasn’t done anything with his life.”

I ask what the young actors at XU are learning. Stern distills his lesson in one word: “Specificity.” He gets them to move beyond generalizations about their characters. “They learn to speak their minds,” he says. “I have them try different ways and see which they like better.”

He’s not dictatorial; he never says, “This is how we’re going to do this.” “It’s letting them know they can have a voice,” he says.

Stern also watches for technical things. One of his actors was “de-energizing,” dropping his voice at the end of his lines. Stern urged him to focus on that. “The result was pretty terrific,” Stern says. “I haven’t had them in class, so I can spot something like this. That’s part of the fun coming in fresh and working with students.”

He’s also intrigued with how Lonergan’s script mixes comedy and drama. “It’s not the most serious play ever written,” he says. “There’s lots of comedy. You have to be able to bridge the gap between the two. If you really do the work, you might be able to get it, but if you don’t do the work, there’s no way you’re going to get it. It will not happen.”

Stern loves working with student actors. “They are kids,” he says. “There’s a kind of joy. The energy of young people is undeniable. You walk out of rehearsal maybe being a week or two younger.” He laughs heartily. “I won’t say years younger, but there’s a really good, healthy energy that they bring to the mix.”

That’s keeping Stern going these days. This is Our Youth will be presented Dec. 3-6 at Xavier’s Gallagher Student Center.