'A Quiet Passion' provides a glimpse into the life of the famed poet with a narrative devoted to ideas, principles and words. 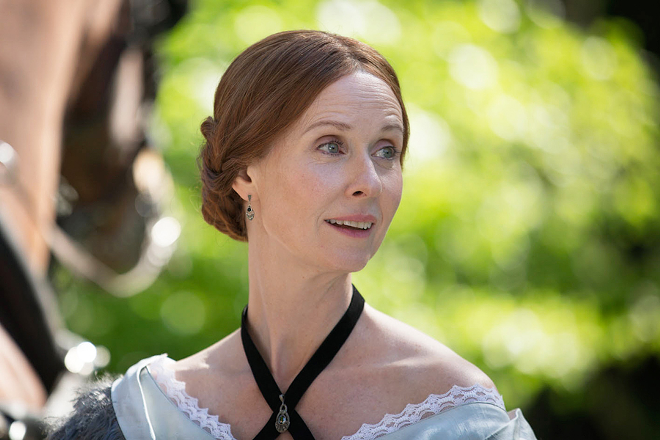 Photo: © "A Quiet Passion" / Hurricane Films / Courtesy of Music Box Films
Cynthia Dixon plays the great American poet.
To live a life of willful obscurity seems impossible in today’s reality. Who would dare avoid having a social media presence, a place where every uttered word or impromptu selfie offers proof of life and the very act of living — especially when we are all poets and philosophers (in 140 characters), photographic chroniclers of the times and curators of culture, thanks to the internet?

A Quiet Passion, from writer-director Terence Davies (The House of Mirth), doesn’t so much directly challenge this notion as offer an alternative reflection, a glimpse into an age when the ideas of what was “public” or “social” might have barely registered in conversation. Passion documents the story of Emily Dickinson (Cynthia Nixon), the highly regarded American poet who lived from 1830-1886.

We get the immediate sense that Dickinson, played as a young schoolgirl by Emma Bell, definitely felt a call to action most would have considered out of place and character for her times. Seen as a student at Mount Holyoke Female Seminary and later on (following her early withdrawal from the school), Dickinson dared to question the heavy-handed evangelical bent of her times, the nation’s adherence to slavery and even the second-class status of women. But she did so without being able to have her voice merge with other likeminded rebels outside her family. Dickinson had only her father (Keith Carradine), brother Austin (Duncan Duff) and sister Vinnie (Jennifer Ehle) to stoke her social and cultural passions.

Davies crafts a stunning recreation of the mood and tone one might associate with the spirit of this somewhat dark age. His film is austere in setting and bereft of action in any traditional sense. This is a narrative devoted to ideas, principles and words. We get snippets of poetry from Dickinson, provided as voiceover narration by Nixon, but the idiosyncratic detail comes in the rendering of the silence within the scenes, where Davies holds steady, forcing us to watch and wait, sometimes dissolving and moving to scenes mere moments ahead. The jumps come to approximate the advance of poetic lines, with the visual shifts approximating commas or line breaks.

Davies feels no need to etch the screen with Dickinson’s poetry, the odd punctuation and phrasing that epitomizes her work — a body of work, we must remember, that was largely undiscovered during her lifetime. Dickinson only had a handful of poems published, and we see in A Quiet Passion how that bothered her. Dickinson longed for acceptance, a greater awareness and appreciation from publishers and readers.

Davies gives us a stunning moment, making this case. We watch, as Dickinson does, while Reverend Wadsworth (Eric Loren) reads a few choice pieces she gifted to him, and this amazing scene unfolds with the camera zeroed in on Nixon’s face. In that excruciating moment, Nixon displays a swirling stew of emotions. She gives us a glimpse of how breathless anticipation matures into what could only be understood as abject horror. Dickinson’s fear of having her work rejected by someone she admires coalesces into a later retreat from the world at large. We come to realize that it is likely after this that Dickinson resolves to keep to herself, enjoying nothing more than the embrace of family, and never leaving the security of the family home.

Nixon seizes the opportunity here. She shakes off previous associations, especially her memorable run on Sex and the City. She takes to A Quiet Passion’s period as if realizing she, herself, was born in the wrong time and should have rightfully lived in this earlier age. That she captures the chafing that Dickinson felt isn’t because she as an actress is a modern woman fighting to merge contemporary sensibilities with the period, but rather she seems to be completely at one with the world the film depicts.

Davies and Nixon work in perfect tandem in A Quiet Passion, penning a letter from the past that refuses to draw parallels to our current situation. Instead, it presents the routines of the day and allows us to fill in the beats that make up the rest of what Dickinson bemoaned as “a minor life,” but what should be celebrated as a discovery for the ages. (Tentatively opening June 9.) (PG-13) Grade: A-