Though not a traditional holiday story, the endearing fairytale will likely entertain the whole family 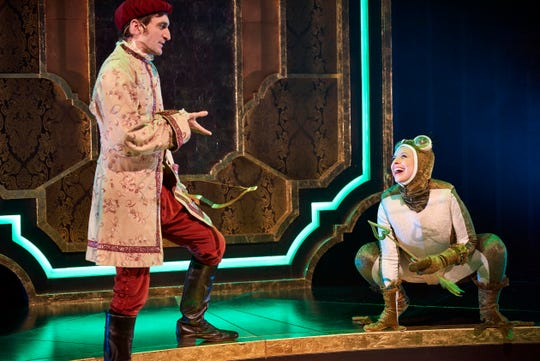 Look past the quirks (and warts) and you might just find love. And, more importantly, kindness. At least, that’s the moral center of Ensemble Theatre Cincinnati’s whimsical production of The Frog Princess. No, it’s not a take on that Disney princess tale.

With music/lyrics by David Kisor and a book by Joseph McDonough, this Russian fairytale first premiered at ETC in 1997. It tells the story of Princess Vasilisa (played sweetly by Brooke Steele), who hails from a faraway land shrouded in mystery. Once selfish, she has been cursed to live as a frog unless she is able to bring kindness into her heart.

The musical opens on the Tsar (Burgess Byrd), a doting mother who has been thinking that it’s time for her three sons to marry. In order to find their wives, they must first go into an open field and shoot an arrow. (Yes, from the modern lens this seems like a weird way to marry, but I digress.) In true fairytale fashion, their fated wife will be found wherever their arrow lands. First is Boris (Michael G. Bath), the oldest son, and then Nicholai (Darnell Pierre Benjamin). (The charming Lisa DeRoberts and Sara Mackie, respectively, take on the roles of their betrothed.)

When youngest son Ivan (an earnest Patrick Earl Phillips) —  a clumsy, head-in-clouds fellow — takes his shot, he finds it in a frog’s mouth. And so talking amphibian Vasilisa, much to Ivan’s dismay, is to be his wife.

Post-wedding, Tsar challenges each pair of newlyweds to a set of three “challenges” to determine which will take the throne after she retires. Despite the appearance of — ribbit — not having opposable thumbs, Vasilisa comes out on top. By the third challenge, she’s shed her skin and revealed herself to be a beautiful princess. Completely enamored, Ivan makes a misstep that sends the princess back to the aforementioned faraway land.

Directed by ETC’s producing artistic director D. Lynn Meyers, there’s much warmth to be found in The Frog Princess. Each actor’s character feels as if pulled from a storybook. Their expressions and movements, at times, are slapstick (a detail sure to bring the kiddos laughs) without feeling entirely overdone.

After intermission, the show’s second half hones in mostly on Ivan’s journey through the woodlands to find his love. Here, several actors make appearances as other characters. Benjamin steps into the role of a bearded, silly old man and Bath becomes the folkloric chicken-footed Baba Yaga, embodied with a winking sinisterness. Both of these roles deliver some of the production’s most humorous moments — and the most sing-along-worthy tunes. With their aid, plus the help of a bear, fish and bird, he’s eventually able to crack the riddle of Vasilisa’s whereabouts.

As Old Bones, the supernatural being that has entrapped Vasilisa, Deb G. Girdler delivers a slinking, wicked performance. Wearing an unearthly skeleton costume designed by Mary Murphy, Girdler’s singing voice carries bluesy undertones that feel like stepping into a dense, chilly fog. Brian c. Mehring’s scenic and lighting design is simple, yet effective. Shifts in light connate mood and place; revolving panels do much the same. A trio of colorful, magical “Night Maidens” (Alexia Vlahos, Kayla Marie Klammer and Rachael Petranek) float on and off set, often delivering props as they do; their otherworldly presence adds an extra layer of enchantment.

As can be expected, all ends happily and goodness prevails. Though not a traditional holiday story, this whimsical fairytale will likely entertain the whole family. And, at its core, it speaks to what the season ultimately should be all about: Kindness. True to their own message, ETC performed the show for more than 2,000 economically disadvantaged school kids this season via their Fairy Godmother Program. Viva la theater!