International environmental organization Stand.earth is delivering a "Golden Chainsaw" award to Procter & Gamble today — National Toilet Paper Day — to honor/dishonor the company's Charmin toilet paper brand and its use of fiber from the boreal forest in Canada in its creation.

“While National Toilet Paper Day might seem like just another arbitrary holiday, given this year’s widespread obsession with TP, today is the perfect time to put America’s hottest commodity back in the spotlight," says Jen Mendoza, Forest Campaigner at Stand.earth. "We hope our silly awards draw attention to a much more serious problem: Procter & Gamble’s forest destruction over its continued refusal to incorporate recycled fiber into its Charmin toilet paper. It’s time for the maker of America’s No. 1 toilet paper to stop flushing our forests down the toilet." 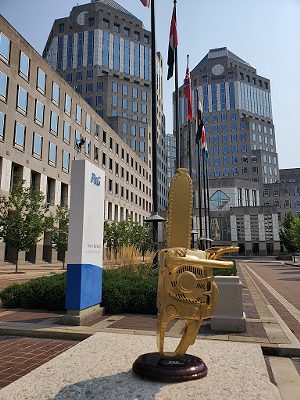 In October 2019, protesters gathered outside P&G's local headquarters, chanting, sitting on toilets and holding signs decrying Charmin for the same reason, as shareholders filed in for the company's annual meeting.

That demonstration was organized in part by New York-based National Resources Defense Council, which gave Charmin the lowest possible rating in a report called "The Issue With Tissue." Charmin received its "F" grade because it is made with virgin, non-recycled fibers from trees often clear-cut from places including the Canadian boreal forest, one of the largest in the world.

Scientists say the forest, one of the last intact old-growth forests in the world, helps sequester carbon, which, when released via the burning of fossil fuels and other materials, contributes greatly to the earth's ongoing climate change. Large forests like the Canadian boreal can absorb some of those emissions — as long as they're not cut down. The forest is also home to more than 600 Indigenous communities, as well as caribou, pine marten and billions of songbirds, says Stand.earth.

In June of this year, the NRDC released "The Issue With Tissue 2.0," which once again gave Charmin an "F" rating, saying, "We can put a dollar value on the harm P&G causes to the climate. Government estimates put the long-term marginal economic cost of carbon emitted into the atmosphere at $50 per metric ton. P&G currently causes $532 million worth of emissions harm by using virgin forest fiber for its tissue."

During last year's protest, P&G said it met with the NRDC to come to agreements about new environmental commitments it can make. The company said that it replaces each tree it cuts down with at least one new tree, has helped replant 2 million trees destroyed by the California wildfires, has invested heavily in research strengthening the fibers making up its toilet papers so that people can use less and has continued to research fibers not derived from trees and those from fast-growing varieties of trees certified by environmental organizations.

And the Charmin website has a sustainability link with information that says the brand is Forest Stewardship Council and Rainforest Alliance Certified and "made of material from well-managed, FSC-certified forests and other controlled sources." It also lists the ways P&G/Charmin are going "beyond to restore, grow and protect forests globally."

However, this year's NRDC report also accuses P&G of "greenflushing" — a toilet paper pun on the term "greenwashing" — or making vague claims about the eco-friendliness of its product and its commitment to sustainability and regrowing trees.

Stand.earth says that while they engaged with company executives in a long negotiation process last year, they reached an impasse with Procter & Gamble "over its sourcing practices when the company refused to adopt concrete steps to uphold Indigenous rights, and clear, science-based commitments with timelines and actual goals to cease working with suppliers that source from boreal forest areas beyond the 65% habitat intactness threshold established by the Canadian federal government."