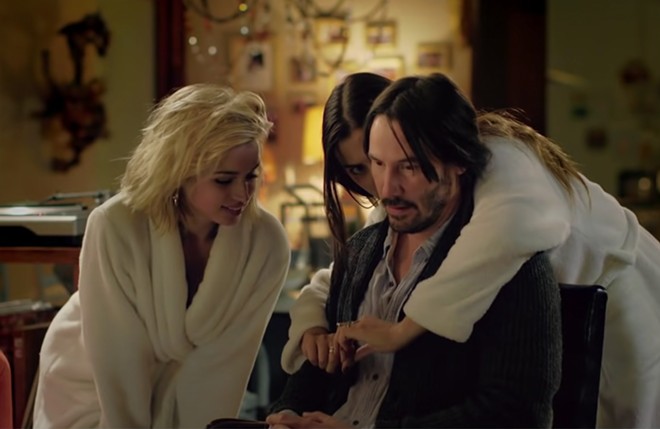 Movies have a way of persisting in the mind, but they can literally be lost to time if not properly preserved. That’s why it’s so important physical films are restored to optimum quality for our evolving culture’s historical integrity — not everyone can stand grainy film and certain titles deserve better.

The folks at Grindhouse Releasing are doing horror fans a big service with their ongoing efforts to restore and re-release genre films that are on the cusp of extinction, including the 1977 film Death Game (also known as The Seducers on the videotape market). Now a new audience can experience what Death Game puts its viewers through at the Esquire Theatre in a double-feature on March 26 with Knock Knock, director Eli Roth’s 2015 remake of Death Game starring Keanu Reeves in one of his most divisive roles.

Death Game is about George, a husband at home alone while his wife is out of town on a family emergency. It’s George’s birthday and he’s enjoying a quiet evening by the fire while a storm rages outside. He receives some unexpected guests, two soaking wet and shivering young women, Jackson and Donna. The women say they are lost and need to use George’s phone to call friends to pick them up, but one thing leads to another and they all wind up in the tub together after the ladies use their wiles to convince George to put a stain on his happy marriage.

This is a home-invasion thriller akin to The Last House on the Left, The Strangers and Funny Games and many others (people are really scared of intrusion), making for extremely tense scenes that are like sensory overloads: it’s sexy, grotesque, shocking and schlocky all at once, a perfectly campy cinematic trip that’ll leave you looking over your shoulder in the kitchen for weeks to come.

Knock Knock takes much of the hand Death Game played and throws the cards across the room, resulting in an even more brutal and shocking experience — if you’ve ever seen an Eli Roth film (Cabin Fever, Hostel or Green Inferno for example) you’ll know the director has a penchant for malicious excess with unsettling humor to balance the ride.

Starring Keanu Reeves, Lorenza Izzo and Ana de Armas, fans have fallen in love with a particular scene where, not to give away too much, Reeves’ character is tied up as he’s tried in a kangaroo court in his living room by the seductresses. There he delivers one of the funniest lines in the film as a way to seemingly explain his actions: “It was free pizza! Free fucking pizza!” To celebrate this wonderfully delivered bit of dialogue, the Esquire is offering free pizza to the audience.

Director Roth shot an intro to the double-feature that will play before the films, so come by the Esquire Theatre on March 26 if you’re looking for a shockingly tantalizing night at the cinema. The screening starts at 7 p.m. and tickets are $12 for this special event (includes free pizza). Get tickets in advance at esquiretheatre.com.

View the trailer for Death Game:

And the trailer for Knock Knock: