CityBeat sat down with Evan Tyrone Martin before he performs at the Aronoff Center for "An Unforgettable Nat King Cole Christmas." 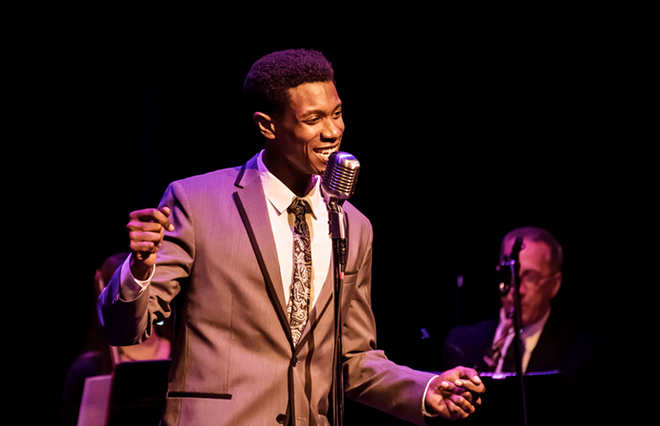 When Evan Tyrone Martin was a boy, his grandmother introduced him to the buttery, soulful croon of Nathaniel Adams Cole, forever known to the world as Nat King Cole. He was hooked. Cole had that effect from the beginning of his vocal career in the 1940s; TV and radio show host Jack Benny once introduced him as “the best friend a song ever had.” Cole went on to record 28 studio albums and released over 150 singles that landed spots on Billboard’s various charts.

As for Martin, the Cleveland native graduated from nearby Ashland University and relocated to Chicago, where he became a renowned actor, landing spots like the title role in Jesus Christ Superstar, as Curtis Taylor Jr. in Dreamgirls and as King Triton in The Little Mermaid, among others.

Three years ago, when producer Michael Ingersoll was casting the role of Nat King Cole for an Artists Lounge Live series, one of ALL’s music directors was working with Martin on a show. After seeing a video of Martin performing Cole’s “Smile,” Ingersoll knew he had the right man; they developed Unforgettable: Falling in Love with Nat King Cole. Then, a separate holiday show, An Unforgettable Nat King Cole Christmas, which debuted last year and is now on its first national tour, coming to the Aronoff Center for a three-night run Dec. 5-7. Martin spoke with CityBeat by phone about his love of Cole and his reasons for doing the show.

CityBeat: You’re an accomplished actor with an amazing range of roles. Do you actually portray Nat King Cole in performance?

Evan Tyrone Martin: No, and I think it’s important people know that. I have such reverence for Nat King Cole that any kind of imitation feels wrong and it’s not the direction I wanted to go. I wanted to present a night of his music to people that could show them my appreciation for his music and style and tell them more about his life. I rewatched and relistened to a lot of things and realized we had many similarities; I adopted some of his movements so when I’m singing his songs people can feel like they’re transported to a Nat King Cole concert naturally.

CB: Between Nat King Cole’s original 1961 Christmas album and “The Christmas Song,” which was added for the 1963 reissue, that’s about 35 minutes of music. Beyond that, what do you perform in the Christmas show?

ETM: A lot of it is Nat’s hits that people want to hear, like “Smile,” “Mona Lisa,” “Route 66” and “Straighten Up and Fly Right.” His catalog is so amazing that we couldn’t just give them half of it. To have that (Christmas) music and add a little of his Pop music — it’s a nice balance. We do all sorts of fun things — there’s a little caroling — but we mix it up so it’s not just the Christmas music.

CB: By most accounts, Nat’s Christmas album is the third most successful of all time. Do you feel added pressure to get this right, for his legacy as well as your own?

ETM: Absolutely! Michael and Angela (Ingersoll) are very sweet and encouraging, but I think they were surprised when they met me. They were like, “We feel you have the confidence to grab Nat’s music and run with it.” I was like, “I have no idea who would even want to hear me sing this music.” My only job in this, in my mind, is that I don’t do any damage to his music. There’s always a little pressure, but it’s not pressure for my legacy at all. It really is just about doing justice to his music. I watch people get transported to a very different, specific and visceral place when they hear these songs, and that helps me stay very humble and say, “This is not about you or how good you sound, this is about people getting the essence of Nat when they hear you sing.” That’s the most important thing. As long as people enjoy themselves and they feel as though they might have been in the room with Nat for a little while, I’m over the moon.