In some ways, it feels unnecessary for the Cincinnati Art Museum to have a show honoring the gallerist Carl Solway’s connection to its Contemporary collection — the current Not in New York, which does just that, is up through Oct. 30. 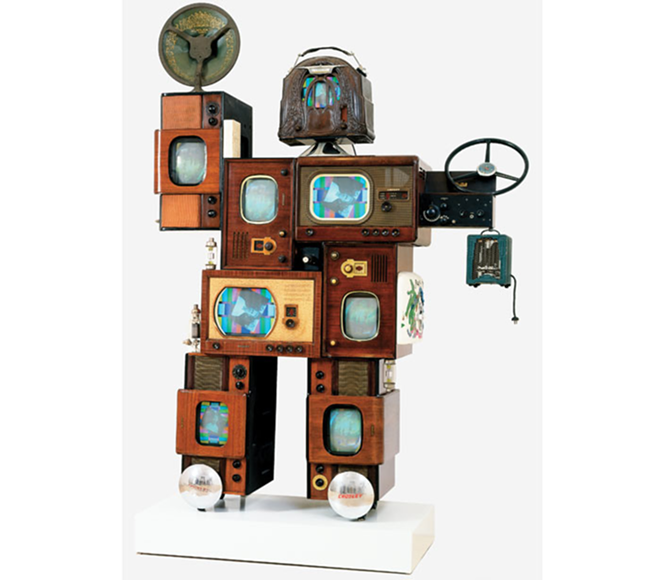 In some ways, it feels unnecessary for the Cincinnati Art Museum to have a show honoring the gallerist Carl Solway’s connection to its Contemporary collection — the current Not in New York, which does just that, is up through Oct. 30. Would there even be much of a Contemporary collection without him, or without patrons like Alice Weston who learned about and purchased Contemporary art through him?

Two of the museum’s most important and popular pieces are the result of Solway. He arranged for the museum to commission both Andy Warhol’s baseball-card-style portrait of Pete Rose and Nam June Paik’s “Powell Crosley Jr.” video robot. But probably not many museum visitors know that. And, in the past, it wouldn’t necessarily have been appropriate for the museum to highlight such a relationship with a dealer/collector/donor.

But this is the time for one. Solway, 81 years old and president of the Findlay Street gallery that bears his name, opened his first gallery here in 1962. Early on, as a result of developing a relationship with avant-garde artist and composer John Cage, he decided to show and publish “the classical work of my own generation,” he has said.

Because of that, his history is intertwined with that of Contemporary art’s impact in the U.S. and especially on Cincinnati. (We have also luckily long had a contemporary art museum, too.) Yes, that is worth a show now.

Not in New York, curated by CAM prints curator Kristin Spangenberg and Matt Distel, exhibitions director at The Carnegie, illuminates that impact. Even those who already know of Solway’s contributions will be surprised by the breadth, appeal and “good eye” of the work here. Among the approximately 50 pieces on display (mostly from the collection) are some never before shown at the museum, and others that haven’t been seen in years, maybe decades.
Going through this work, which fills several galleries, you’ll find an eminent list of major names from Solway’s generation, plus quite a few artists active today. Those represented include Ann Hamilton, Tom Wesselmann, Richard Hamilton, Helen Frankenthaler, Buckminster Fuller, Willem de Kooning, Cage, Paik and many others.

Joel Otterson’s “The Peaceable Kingdom (The Wall of China Made in America)” is one standout artwork. Solway began showing him in 1987 and Otterson lived in Cincinnati during the 1990s before moving to Los Angeles. A 1995 museum purchase, Otterson’s “The Peaceable Kingdom” rarely gets displayed because it’s big and difficult to move.
Copper pipe has been shaped and fitted to create a giant étagère holding kitschy, colorful, found ceramic pieces — cookie jars, tabletop decorative planters (with little bunnies or wide-eyed dogs) and others. I find it a bright but subtly quiet meditation on Rust Belt decline: A material used in once-vital industrial production gets turned into a passive vessel holding a kind of nostalgic tchotchkes. You can imagine these little objects in the home of a person shut off or left behind by change, turning to solace through sentimentality.

Another large piece that pops out with hypnotizing power is Alan Rath’s 1992-1994 “Litter,” a kinetic sculpture in which electronics, cathode ray tubes and lights are used to create a kind of video Frankenstein. Rath, who now has an international following, is a Cincinnati native, and Solway was an early supporter of his work. The museum purchased this in 1998.

A touching new addition to the museum’s collection is a complementary pair of mixed media sculptural “portraits” of Solway and his wife Lizi by Aminah Brenda Lynn Robinson, the Africa-American artist from Columbus (and recipient of a MacArthur Foundation “genius grant”) who died last year. She had made them for the Solways as a gift in 1985 using joyful everyday materials; they gave it to the museum last year to honor her.

Behind a bamboo cage that conjures up a solitary-confinement cell, monitors show close-up wandering eyeballs and hands (both in yellow) and a green moving mouth. They roughly form a human-like presence, a jumpy and weird one that seems dangerously hyperactive. You can’t turn away from it, like watching reality TV.

The Puerto Rican artist Rafael Ferrer’s 1972 “Umiak/Whale” once hung over the Solways’ dining table; they gave it to the museum in 1995. It must have made for some great dinner conversation, as this rawhide and wood sculpture looks like a decomposing boat, a deflating blimp or a cloud that floated in from Mars and is ready to leak rain. It makes you think. We’re lucky that it, and so much more, belongs to the museum because of Solway.