Fielding Fake Orchestras and Economic Hardships in ‘Sounds Like Titanic’

In her debut memoir, Jessica Chiccehitto Hindman explores disillusionment with the realities she finds herself in. 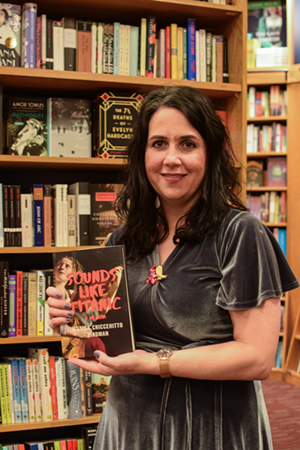 Through the course of Sounds Like Titanic — a new memoir by local author Jessica Chiccehitto Hindman — the reader comes to understand Hindman is overtly referencing the 1997 mega-hit film’s soundtrack, which was filled with soaring penny whistles, aching violins and, obviously, Celine Dion.

But Hindman has also done something very clever: From the get-go, she’s lets us know that the story she’s about to relay in this book is an unmitigated disaster. Hindman’s own proverbial ship goes down in flames. It’s uncomfortable. It’s tense. And it’s really funny.

“When I was (at Columbia University’s MFA program) everyone was writing a memoir,” Hindman says. “I was like, ‘Not me.’ First of all, what even is a memoir? It sounds really French and pretentious — memoir — but then I started to realize that this was not just about Classical music. It was also about class, and that I played a role in that, too.”

Raised in Appalachian West Virginia as the daughter of a family physician and social worker, class was something Hindman struggled against; she came to this realization when she arrived at Columbia as a freshman undergraduate. But, comparatively, she was one of the lucky ones. Growing up, her father’s job as a doctor meant she was better off than most of her peers; eventually, she would be able to indulge in violin lessons a lengthy four-hour-drive away.

Though, at first, it seems like the memoir will be centered around Hindman as a violinist, it, very fittingly, doesn’t. Hindman admits in the memoir that her violin talents were not virtuosic. That realization came while attending Columbia, where she found herself surrounded by “dozens of better-than-you violinists,” she writes. To make ends meet and pay her exorbitant tuition, Hindman eventually resorts to selling her eggs. But first she sees an ad calling for violinists.

“You read the ad again and again,” reads the memoir. “If you got this job, you would double your current income. More than that, you would become what you had spent your childhood dreaming of becoming: a professional violinist.”

Enter The Composer. Hindman gets a callback for an audition, which takes her on a wild ride that ends up comprising the crux of the memoir: Her experience “playing” the violin at fake performances. The Composer and his small ensemble tour around the country. But instead of actually performing, Hindman and the other violinists play quietly into an unplugged microphone while audiences hear music that sounds suspiciously like the Titanic soundtrack pouring out from the speakers.

The figure of The Composer is flamboyant, quirky and outsized. (He is reminiscent of the conductor in the Amazon television series, Mozart in the Jungle.) In one scene, Hindman plays Beethoven’s Fifth Symphony and The Composer asks her who it is. For all that, he remains a figure of mystery.

“While he is a very entertaining character, he’s not the point of the book,” Hindman says. “I’m not going to tell anybody who The Composer is or confirm any guesses. I’m happy people are interested, but I also hope people would be kind and realize this is not a crime; no one was hurt in the making of this music.”

If it feels like Sounds Like Titanic is about a lot of things, it is. Hindman began writing the memoir, which she initially intended to be an article, several years ago. She says it took her five or six years to get past page 50, and then three months to write the rest. To keep track of all the moments she touches on, Hindman had hundreds of index cards tacked up on a board.

“There’s The Composer thread; explaining Appalachia to Ivy League thread; then the whole thing in the Middle East, which was like I knew that was a big thing about this book,” she says. “But when you try to explain this to people, they get so hung up on fake violining and then you’re like, ‘Oh, also, September 11,’ and they’re looking at you like you’re insane. This is six different stories.”

She’s referencing her time in Cairo, where she studied abroad in the fall of 2001, after she’d decided to become a Middle Eastern studies major. It was a tense and turbulent time. Though her experience of 9/11 was distinctly different than most of her contemporaries back in the U.S., many of her experiences are also universal.

“The best memoirs are able to tell not only the individual’s story, but also the societal story,” Hindman says. “I have all these flaws, but they’re not just mine — I am also living in the society in which I live in.”

The memoir is arranged in two parts; each contains a series of mini-chapters with dates and locations. Her choice to use second person point-of-view is grounding, letting readers feel like we, too, are naïve college kids trying to figure out the best path through life. She also weaves in bits of narrative written in first-person present tense, which she notes was used in chapters recounting her time on tour with The Composer.

Issues of class and the American societal belief that hard work is of utmost importance are Sounds Like Titanic’s most resonant themes. Hindman says talking about money in the memoir was the hardest part — even harder than talking about the fake performances, The Composer and the mental and physical illnesses that manifested during her time with the ensemble.