Michael Moore's knack for framing political and social issues in a surprisingly entertaining documentary format is a journalistic phenomenon that picks up where '60s- and '70s-era activist filmmakers left off. Davis Guggenheim's An Inconvenient Truth might have been the first movie, documentary or otherwise, to effect noticeable social change, but Moore's Fahrenheit 9/11 became the highest grossing documentary in history, by far.

Unlike in his previous films, Moore himself doesn't appear until roughly an hour into Sicko, by which time he's set the parameters of his intercontinental comparative medical-care window-shopping tour. Sicko isn't necessarily about the 50 million Americans living without health care, of which 18,000 will die needlessly this year, but rather about middle-class Americans living with medical coverage in a system that charges increasing prices for an ever-shortening list of services while poorer countries run circles around us. The point is summed up in a Star Wars-style scroll that lists conditions that will make you ineligible for health care under corporate pirates such as Aetna or Cigna. Even more damning is the fact that Moore took a group of ailing 9/11 rescue workers to Cuba to in order to get the health-care attention they needed.

I spoke with Moore at the Cannes Film Festival, where the director premiered Sicko outside of competition in respect to having already won the 2004 Palme d'Or for Fahrenheit 9/11.

CityBeat: What's the first thing on your mind about the way the Bush administration is attacking you?

Michael Moore: The New York Post reported that the Bush administration is now investigating the 9/11 rescue workers who we took to Guantanamo Bay, and they're not going to just come after me. If what the Post is saying is true, I'm just kind of stunned that they would go after rescue workers. I just think it's really shameful.

Go after me, go after the film, but they should leave these people alone.

CB: Did you make any arrangements with U.S. officials about bringing patients to Guantanamo before going there?

MM: We first approached the Bush Administration last October about wanting to go down there, and they stalled and stalled. Finally by March — six months later — we decided, well, it's already legal for us to go down as journalists. That's what we're going to do. They did not know we were coming that day by boat.

CB: How much of going to Guantanamo Bay was to give Sicko a dramatic climax?

MM: We were going to go wherever our government was holding detainees. The whole purpose of the trip was to ask for the same kind of health care that we're giving the Al Qaeda (detainees) — no more, no less. Just give the 9/11 rescue workers the same treatment that they're given. We didn't make the decision that the prison be in Cuba. The Bush administration made the decision to put it in Guantanamo Bay, Cuba, so that's where we ended up.

As far as the health care that they received from the Cuban doctors, it's probably the best system in the Third World. The Puerto Rican EMT that was in the film stayed there longer and wanted to find out whether or not the Cuban hospital was doing this because the cameras were around. So she snuck out of her hospital room one day, went downstairs, came back into the door and walked up to one of the intake desks — and it was the exact same thing that happened. They asked her her name, her date of birth and they put her in a room.

And I think if you interviewed these three 9/11 rescue workers, they'd tell you how grateful they are for the help that they received.

CB: A key issue that the Republicans always run on is lowering taxes. How do you address taxes as they relate to government-subsidized health care?

MM: I don't blame Americans for not wanting to pay taxes. We pay these taxes, and we can't get a pothole fixed. Nothing works. In France, Canada, in Britain and in other places, they actually see some tangible results for the money they pay in taxes. So that's where, I think, the big difference is. I think, if Americans saw tangible results, they'd be willing to pay, if it meant they'd be covered in health care. But we as Americans are going to have to restructure our thinking about such things. Yes, it is important that we share, and sometimes we have to stand in line. If it means standing in line for a little while so that everyone is covered — are we willing to do that?

I think we need to learn to share. People like to refer to the United States as a Christian country. I'd like to see that, because we'd be better off.

CB: Why did you make a point of not addressing uninsured or poor citizens?

MM: I state at the beginning of the film that this film is not going to deal primarily with the poor, that I want to talk to you middle-class Americans who think that everything is honky-dory. When I went to these other countries, I wanted to show people who make similar amounts of money. We have a schoolteacher from San Diego who makes $52,000 a year — $1,000 a week or $8,000 a month. So I wanted to find something comparable. It's never going to be exact, but I'm trying to appeal to an American middle-class audience and show them middle-class families. A hospital I go to in London is in Hammersmith. I do that because I want the American audience to see themselves in this. I go to London, Ontario, not maybe a bad section of Vancouver.

CB: Why did you choose to premiere Sicko at Cannes?

MM: It's the most prestigious film festival in the world. It's an honor to be asked to come here. I hope the French go see it, but I'm not here to build a French audience for the film. It's so hard making these films, and we work right up to the last minute making them. It's just something to look forward to. (Laughs) "We're going to be done soon, and we'll go to the south of France." It's a wonderful festival, and people treat us very nicely.

I'm a filmmaker. I make movies and that's what I enjoy doing. I'm not writing a book, and I'm not writing a piece for the Sunday magazine. I'm very, very careful about the facts in my film. The facts in my film are accurate, they're correct. The opinions in the film are mine. If I say that there's nearly 50 million people without health insurance, you have to know that that's a fact. If I say that there's 9 million children in America that are uninsured, you have to trust that I'm giving you a fact. But if I say that I think private health insurance should be eliminated, that's the conclusion or opinion I've reached from the facts that I've stated here.

We go through such a vetting process of fact checking that goes way beyond anything journalists do for print publications. I've got five or six field producers, a couple of senior field producers, four researchers, four or five people in the archival department and then I have four independent vetters, who are not on staff and not connected to the film. Two sets of lawyers look through the film — first my lawyers, then Harvey Weinstein's lawyers, and then we hire an outside firm to go through it. Then the insurance company that insures the film sends their lawyer to look at it.

All my crew are fully insured by me, and they get the absolute best coverage that Aetna offers. There is a zero deductible. I'm very careful, and I've rarely been sued. If I said things that were wrong about people, trust me, people would be coming after me in all directions. But they don't, because things I state as factually true are factually true. But the conclusions I reach are mine. If anybody tells an anecdotal story in the film, that's there because it's based on the evidence.

MM: In France, the federal tax rate is 10 percent. That covers the infrastructure, and then on the pay stub they list the tax for your children's college education, the tax for your health care and the tax for your day care, etc., so that every week you see what your money is going for.

The myth is that private is better and less expensive, but it's not true. If this was in the hands of the government, it would be run a lot more efficiently. If you don't believe it, ask your parents or your grandparents if their social security check comes every month on the same day. It does, via the crappy U.S. mail. It's a behemoth system paying out millions of dollars every month to millions of senior citizens, and it works.

CB: When you load up the boat going to Guantanamo Bay, there are a lot more people than just the three rescue workers that you arrive with. Did you take those other people to Cuba for health care, but choose not to show them?

MM: Yes, we did take more than the three 9/11 rescue workers. It's just that the film would've been four hours if I told all of the other stories. We probably had close to a dozen people that we got medical services for.

CB: What subject do you plan on attacking in your next film?

MM: I made the mistake of answering that question three years ago, and the pharmaceutical companies and the insurance companies went on high alert and they issued memos to their employees not to talk to me. But because a number of the employees hated working there, they sent me the memos. Pfizer set up a Michael Moore hotline — if you see Michael Moore at any Pfizer location, call this number. Some company hired a guy to do a psychological profile on me to inform employees as to how to deal with me. It said, "Try to get him off the subject by talking about Detroit sports teams or compliment him on his recent weight loss." I read that and I thought, "This guy's a genius. This would absolutely work."

The ironic thing about this is that I had decided not to get near these places, not to bang on the door of the CEO or the congressional office, and here they all were scurrying around, getting ready for me. So I decided this time that I'm not going to talk about what the next film is. © 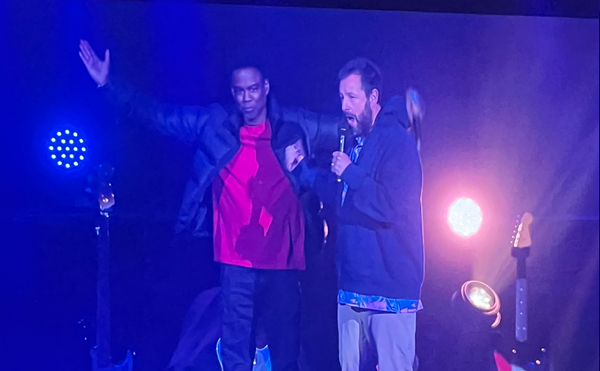