In separate solo shows, Jane Benson and Njideka Akunyili Crosby explore what it’s like to be a stranger in a strange land. 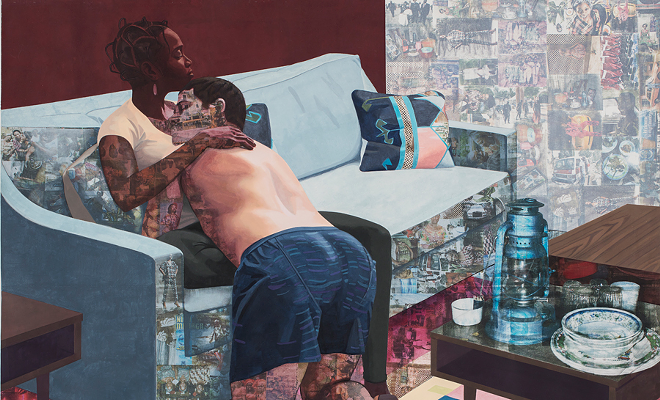 The Contemporary Arts Center has arranged a harmonious visual duet about immigration and identity, accompanied by the haunting strains of string instruments that have been cut in half. In separate solo shows, Jane Benson and Njideka Akunyili Crosby, foreign-born artists who now live in the United States, explore what it’s like to be a stranger in a strange land.

The second-floor galleries are filled with music from a dual-channel video of two Iraqi brothers, one now living in Germany and the other in Bahrain. “Finding Baghdad (Part A)” is the centerpiece of Half-Truths, the exhibit from the British-born Benson. As part of her artistic practice, Benson saws apart mass-produced versions of violins, guitars and other strings to turn them into new instruments for collaboration. To achieve a full musical scale, the halves must be played together by more than one person.

One of the Iraqi brothers performs on half of an oud, a type of lute popular in the Middle East, while his sibling joins him via Skype on half a djoze, another instrument from their homeland. Their faces reveal satisfaction at this virtual reunion a dozen years after escaping their war-torn nation. Yet we know that when the music stops, they will have to retreat to their separate new lives, presumably still feeling less than whole. To illustrate the brothers’ in-between existence, Benson has shredded flags from the eight nations where their family is now scattered and used the strands to weave new banners.

As Benson breaks down and reconstructs the familiar, she creates opportunities for fresh points of view, much as the Cubists did. Three still-life installations from a series titled A Place for Infinite Tuning bring to mind Pablo Picasso’s guitars. Benson’s hybrid musical instruments, including an oud married with a djoze and a cello paired with an Indian sarod, rest precariously on asymmetrical mirrored tabletops and invite us to consider every possible angle of not only her handiwork, but also our identities. Atop each table, “faux faux” bouquets of artificial flowers, their petals and leaves cut into unnatural rectangles, cascade from split vases.

Ironically, Benson draws in a viewer by maintaining a sense of detachment from her art, even in her self-portraits. To create them, she drapes muslin over herself, then reaches around and blindly rubs charcoal crayons over the surface as it rests against her face. The images appear almost alien. “Of all the pieces, they fascinate me the most, because I have less control,” she says.

“A sense of displacement is definitely at my core,” the New York-based artist adds. Though Benson grew up in Manchester, England, she says she doesn’t identify with being English at all. It wasn’t until age 17, when she moved to Scotland, the onetime home of her Irish father and English mother, that she experienced a feeling of belonging.

An unsettled spirit also guides the art of Nigerian-born Akunyili Crosby. But, unlike Benson, Akunyili Crosby chooses to insert herself into her works, via a dark-skinned surrogate, and invites us into personal moments and spaces.

The Los Angeles-based artist combines multiple techniques — drawing, painting, photo transfer and collage — to better represent her multifaceted life. She’s been in America since 1999, but her homeland is always on her mind. Images transferred from Nigeria’s pop culture magazines spread over the surfaces in her works, including the skin of her white American husband.

Her late grandmother’s table in Nigeria, laden with religious and family portraits, dishes and a kerosene lamp, is a recurring character in her Predecessors exhibit. In a diptych, we also see the artist’s own dining table, mostly bare and waiting for new memories to be made. Benches in the gallery space encourage us to take a seat at one of the tables and think about our own legacies and family trees.

For Akunyili Crosby, Benson and others caught between two worlds, their identity is an unfinished symphony.