Chad “Ochocinco” Johnson visited Redlands Grill and left more than just an impression with a generous $1,000 tip and a pretty goofy note 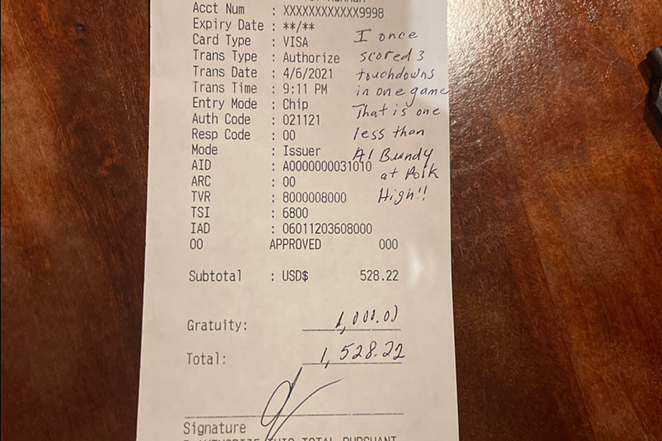 Photo: Twitter/ochocinco
Chad Johnson's note and tip on the bill

Chad “Ochocinco” Johnson visited Rookwood's Redlands Grill and left more than just an impression with a $1,000 tip for the staff on April 6.

In a post on Twitter, Johnson took a photo of the receipt and captioned it, “Proverbs 11:25 (Cincinnati edition).” The bible verse reads, "A generous person will prosper; whoever refreshes others will be refreshed."

“I once scored three touchdowns in one game. That is one less than Al Bundy at Polk High!!”

The generous gesture appears to be unrelated to the viral $1,000 "tip-offs" between local rival fans of the University of Cincinnati and Xavier University, who began leaving hefty tips for restaurant workers in January in an effort to one-up the other college — unless Johnson has put a very abstract spin on it. Regardless, we wholeheartedly approve of the support.

Johnson was a wide receiver for the Cincinnati Bengals for 10 seasons following the 2001 NFL Draft. He briefly adopted the last name “Ochocino” from his jersey number, 85, before returning to his formal name.

During his recent visit to the Queen City, Johnson also stopped by his old condo in Eden Park and reportedly left a note at the door for the current occupants.