In response to the murder of George Floyd, McGill posted video of himself playing “America the Beautiful” in a minor key — plaintive and haunting — before taking two knees and bowing his head. It’s impossible to watch it and not be moved to tears. 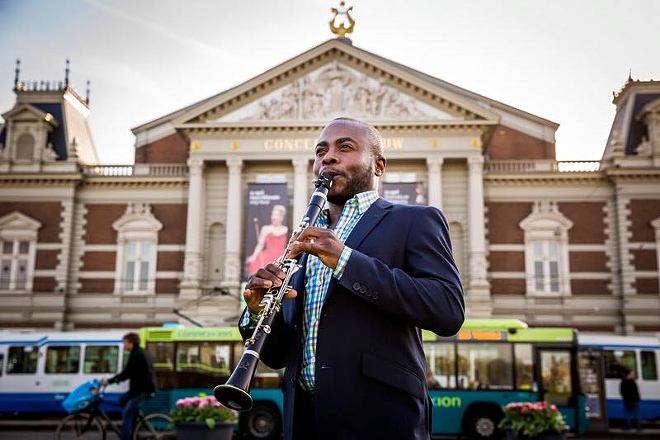 In May, the New York Philharmonic’s principal clarinetist and former Cincinnati Symphony Orchestra member Anthony McGill posted a statement and video in the wake of George Floyd’s murder in Minneapolis. The statement read, in part:

“We live alongside that reality all across America. What the news this week and most weeks of my life demonstrates, however, is that Black lives didn’t matter in our glorified past, and still don’t matter that much today.

“Now’s the time to protest. Join me. This time, let’s try and #TakeTwoKnees in the struggle for justice and decency.”

McGill played “America the Beautiful” in a minor key, plaintive and haunting. He then got down on his knees and bowed his head. It’s impossible to watch it and not be moved to tears.

The devastating, powerful post went viral, prompting performers from all over the world to take two knees.

“I tear up every time I watch one,” McGill says, speaking from his home in Manhattan.

As cultural institutions undergo long-overdue examinations of embedded and systemic racism, McGill stands as a witness and passionate advocate for social justice. And he’s buoyed by the response from his colleagues.

“People can’t stay silent,” he says. “This is a sea change, a community of musicians stepping up and saying what’s wrong? What’s right here? We need to do better.”

McGill grew up on Chicago’s South Side, nurtured by supportive parents and his older brother Demarre, now principal flute for the Seattle Symphony and associate professor of flute at the University of Cincinnati’s College-Conservatory of Music. But none of their many achievements and education are protection against racism.

Anthony McGill joined the CSO as associate principal clarinet in 2000. He wasn’t the only Black player in the CSO; cellist Norman Johns was already a 25-year veteran.

“I knew on whose shoulders I was standing. Norman is such a gentle, loving person. Forget about glass ceilings, he had to break a cement ceiling,” McGill says.

The atmosphere improved considerably by the time McGill joined the CSO but outside of Music Hall, it was otherwise. In an interview with NPR Music’s Tom Huizenga, McGill recalled being pulled over by a Cincinnati police officer.

“I was told I didn’t yield the right of way to a cop and he called me the usual ‘boy.’ He sat in his car with the lights flashing 30 minutes. Then he wrote a citation and just walked away,” he says.

McGill left the CSO in 2004 and Norman Johns is still the CSO’s only Black musician. McGill’s response is establishing the Music Advancement Program at Juilliard, an endowment that provides scholarships for young musicians to study during the summer. He sees it as payback for the encouragement and support he received.

For McGill, advocacy and activism are inseparable.

“Injustice is unacceptable. People have to speak up,” he says.

The CSO is performing composer Anthony Davis’ You Have The Right To Remain Silent — a four-movement concerto for orchestra, clarinet and Kurzweil processor (a keyboard synth) — during Nov. 21’s livestream from Music Hall. McGill is the soloist, along with Davis’ longtime collaborator Earl Howard on the Kurzweil.

Silent debuted at the Miller Theater in 2007 and the CSO is the first major orchestra to perform it.

The four movements in Silent are “Interrogation,” “Loss,” “Incarceration” and “The Dance of the Other.” Davis explains that the premise is that the orchestra is interrogating the clarinet, which responds in jumpy, agitated phrases with frequent pauses for improvisation. Orchestra members recite “You have the right to remain silent” in flat mechanical voices.

McGill — also the recently named winner of the Avery Fisher Prize for Classical musicians — says, “When I heard the title (of Silent), I was in. But when I heard the piece, it was chilling. You can’t help but react."

For more about Anthony McGill, visit anthonymcgill.com. And to learn more about the CSO's Nov. 21 livestream from Music Hall, visit citybeat.com.