ARCO — a portmanteau of “arts” and “community” — will host everything from weddings and family gatherings to Zumba classes and the offices of neighborhood development nonprofit Price Hill Will. 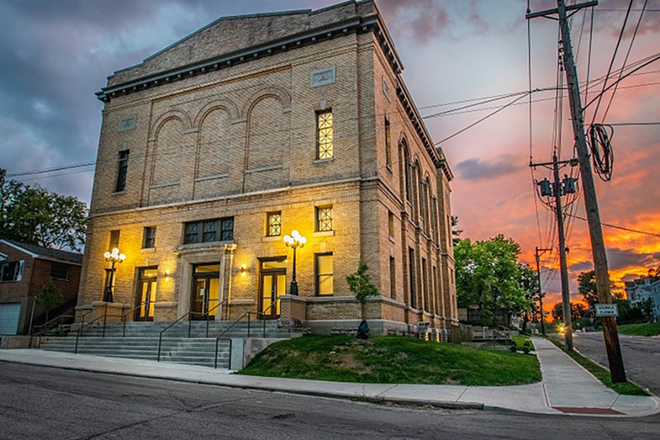 ARCO — a portmanteau of “arts” and “community” — will act as a social enterprise, says Rachel Hastings, PHW executive director. It will offer the community a place to convene, share art and ideas and also put those ideas to work. The building also now houses PHW’s offices and operations.

PHW partnered with The Model Group to co-develop the lodge, securing that $10 million through tax credits and a capital grant from the city.

“The spiritual feeling of bringing back this building for the community just really feels good,” Hastings says. “We are also hoping that this sparks other people to think creatively about what opportunities might be in Price Hill.”

PHW has served the East, West and Lower Price Hill neighborhoods since 2004 with a focus on civic, social, economic and physical development. It places an emphasis on incorporating and promoting the arts, a quality not found in other corporations like it, says Hastings. ARCO will complement PHW’s mission by providing much-needed space for groups to convene, as area recreation centers and library spots are limited and often overcrowded, Hastings says. The 21,000-square-foot building also offers leasable space for public events and private celebrations. 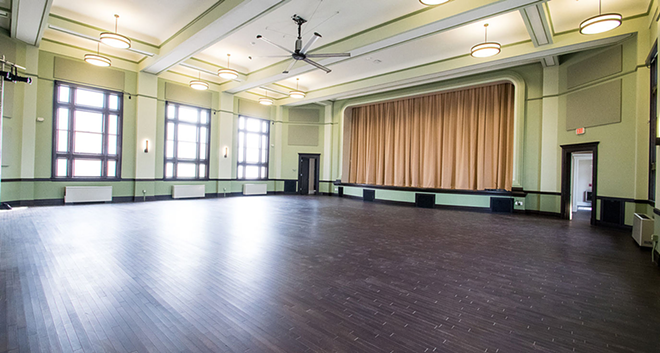 Photo: Provided by Price Hill Will
The Shawnee Theater. Price Hill Will partnered with the Greater Cincinnati Native American Coalition to name the spaces and draft a statement recognizing that the land originally belonged to indigenous peoples.

“We are really focused on equitable development and using creativity and the arts as a tool to bring folks together,” Hastings says. “So it’s really about growing opportunity for everyone who lives in Price Hill, particularly folks that have been left out of opportunities in the past. People of color, immigrants, lower-income families, those folks have often been left out, so we are trying to grow opportunities for them to be successful here in the neighborhood.”

ARCO houses two large ballrooms that boast original features of the building’s Neoclassical architectural style. On the first floor, the Shawnee Theater holds the building’s original, 16-foot-deep orchestral-style stage and grand floor space with a 344-person occupancy. The distinctive arched windows on the second floor are a notable feature of ARCO’s Iris Gallery and also contributed to the building’s namesake, as “arco” translates from Italian and Spanish to arch, arc or bow.

On the third floor, Myaamia Hall has a 32-foot stage that sits below a prominent set of three professionally restored, stained glass skylights.

Hastings sees a lot of potential for weddings and large-scale events in the ballrooms, which get their names from indigenous tribes. PHW partnered with the Greater Cincinnati Native American Coalition to name the spaces and draft a statement recognizing that the land originally belonged to indigenous peoples.

“We wanted to try to honor the people whose land we are sitting on and to recognize their long history in this community,” Hastings says. “And as much as we want to welcome newer populations of folks that come into this community, we also want to recognize people who lived on this land for thousands of years.”

Sheila Rosenthal, president of the East Price Hill Improvement Association, says ARCO will begin hosting the community council’s monthly meetings in September. The council focuses on civic engagement and the betterment of East Price Hill and the entire West Side of Cincinnati; the group previously met in the Price Hill Recreation Center.

Rosenthal is a Price Hill resident of 30 years and says just having the building restored is an enormous step forward, as its previous decrepit state was not positive for the neighborhood.

“East Price Hill in particular is the city’s most diverse community. We have a broad range of ethnicities and races, and we run the entire gamut of the socioeconomic strata,” Rosenthal says. “ARCO is going to contribute in a very large way to social and civic life here. It’s open to events for both local organizations, businesses and families and it’s focused on arts and community also. It’s for everyone both in and outside of East Price Hill.” 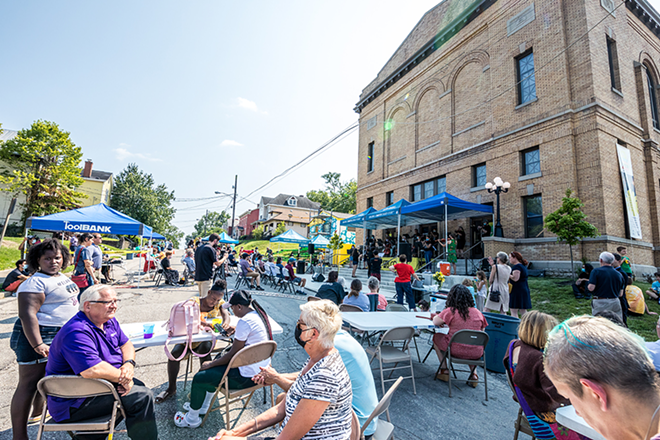 Hastings says that ARCO will rely on rentals from events like weddings and large celebrations to fund PHW projects and building maintenance, while community-centric meetings and groups can utilize the rooms at an approachable fee or sometimes at no cost at all. Revenue from rentals will be funneled directly back into ARCO and PHW programs, and at least one large-scale event per week will be necessary to keep up with utilities, loan payments and other building upkeep, she says.

It’s also a major benefit for residents to have something close to host celebrations like retirement parties, birthday parties, celebrations of life or neighborhood gatherings.

“Folks have a love for this neighborhood,” Hastings says. “So when they have important family events, lots of folks want to do that close to home. Being able to do that here, where your home is, rather than having to go out of the neighborhood somewhere is really appealing.”

ARCO also is home to MYCincinnati orchestra, which provides children free access to music education. The afterschool program currently instructs 130 students who now can look forward to practicing and performing in the brand new building. Hastings thinks giving the students this space adds a layer of seriousness to their work, while honoring their dedication and progress.

“To have concerts in a formal, larger space and the opportunity to shine in a grand space is really exciting for young people,” Hastings says. She looks forward to a full building with multiple meetings and events as well as the birth of new ideas and projects that may come from individuals intermingling in the common spaces.

“You might have a neighborhood association on one floor and folks on another floor learning Zumba, and those folks can meet each other in the common areas or the parking lot. Opportunities for folks to connect are really important, especially in this COVID world where we are all desperate to see other people,” she says.

Following the excitement of ARCO’s grand opening, PHW will focus on the nearby Warsaw Avenue Creative Campus, for which fundraising is now complete. Eight buildings on Warsaw Avenue will see improvements as well as new affordable housing above commercial spaces. Hastings says construction starts in the Fall.

“Price Hill is a big neighborhood, we have a pretty robust residential community and then our commercial corridors unfortunately still have a lot of vacant spaces,” she says. “I think there’s more opportunity for stuff like this. For us it’s about seeing the value in creative pursuits and how that helps people grow as individuals and how they can build leadership skills together and then harnessing that so it has a positive impact on the community.”