Cincinnati’s startup darlings talk business, specs and why they chose the Queen City 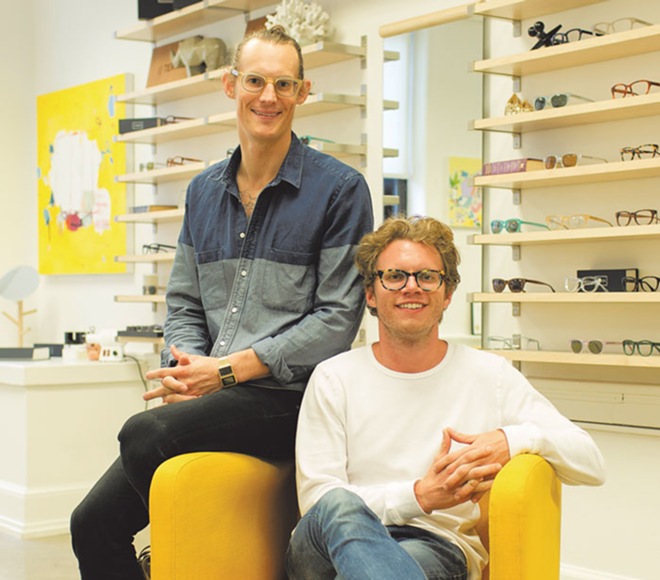 am Pellerito is deep in conversation with the building manager of Frameri’s new office and showroom. The sandwich board that usually sits in front of the building got stolen the day before and, besides, they need something bigger anyway.

A giant banner might even be too small for a startup that’s seen a meteoric rise and been welcomed into the city with open arms. Frameri, the brainchild of CEO Konrad Billetz and CTO Kevin Habich, manufactures and sells eyeglass frames with interchangeable lenses, allowing the wearer to purchase just one pair of lenses that they can seamlessly transition between different frames. Founded in 2012 and launched in summer of 2014, they have raised more than $1 million in seed capital and have already been featured in magazines like Men’s Health and InStyle. Their showroom opened right across the street from Washington Park at the end of July.

Habich and Billetz, natives of Idaho and Chicago, respectively, initially connected on founder2be.com, a site they describe as “the Tinder for co-founders.” Billetz had the idea for interchangeable lenses after being shot in the eye with a BB gun at age 11.

Billetz, recently named one of Forbes’ “30 Under 30,” met Pellerito, the director of business development, while studying for his MBA at Notre Dame. “I came on board because I was excited about the product,” Pellerito says. “I have absolutely no background in eyewear.”

“But none of us did!” Billetz says. “There’s no manual, you know, ‘This is how you do it.’ You just kind of go and figure it out.”

Billetz and Habich initially moved to Cincinnati after being accepted into The Brandery, the nationally ranked startup accelerator in Over-the-Rhine. They had planned to launch the company in Chicago, but found they really loved the creative energy in Cincinnati. “We fell in love with OTR, and just kind of never left,” Billetz says.

Like all good startups (see: Apple, Amazon, Pied Piper), Frameri’s first offices were in a garage, though in their case it was in Oakley, and not Silicon Valley.

“It was torture,” Billetz says. “We didn’t have air-conditioning, we kinda started a fire this one time, there were floods a few more times.”

Luckily, they’ve seen no shortage of funding. Their 2013 Indiegogo campaign raised almost $64,000 in a month — double what they asked for. They also landed a $100,000 investment from AOL founder Steve Case when they won the Rise of the Rest, a pitch competition. A funding round led by CincyTech, a downtown-based funder that invests in Southwest Ohio startups, meant that they were able to move out of the garage in Oakley and into the Emanuel Community Center across the street from Washington Park, overlooking Music Hall.

CincyTech was also their connection to COO Greg Lechner, a former Luxottica executive who also spent time at Coastal, a leading online eyewear retailer. Someone had mentioned that he might like working at a startup, so he reached out to CincyTech, who knew just who to match him with.

Frameri also brought on a full-time optician, a certification required by the state of Ohio in order to dispense lenses. Billetz met Halie Schottelkotte when she was working part-time at a salon and training for her optician license. The two kept in touch, and when the showroom was ready to open, she jumped on board. “We shipped a pair of frames to India the other day!” Schottelkotte says. “Every day I wake up and I’m excited to go to work.”

That’s not to say they haven’t had some speed bumps. Their designer, Noel Gauthier, an industrial design graduate of the University of Cincinnati’s College of Design, Architecture, Art and Planning who was initially hired to design their prototype and now works for them full time, had never designed glasses before joining the company. And a seamless lens/frame transition product is a lot harder than it sounds.

“With the interchangeable lenses,” Gauthier explains, “what’s most important is the circumference of the socket. But (our suppliers) in Italy didn’t have a way of measuring that — so we had to fly over there and invent it.”

Now Frameri has four lines of frames and even a 3-D printer in-house to test design ideas.

“We’re finally at the point where we can really focus in on the business side, because we feel more comfortable with what’s happening on the manufacturing side,” Billetz says.

That includes getting into local stores like Article and other independent retailers that carry high-end, quality frames. They will also be attending the International Vision Expo West in Las Vegas to establish relationships with others in the eyewear industry.

You might also have caught their stint on Shark Tank. Producers of the show were actually the ones to reach out to Billetz and Habich, who decided to do it mostly for the exposure — their website got so much traffic during a recent re-airing that it crashed briefly. Though they didn’t end up taking the deal, “it really sparked a lot of our recent growth,” Billetz says.

Tread lightly comparing them to Warby Parker, though. “Honestly,” Billetz says, “it drives me fucking crazy. Although they have done a great job building their company, and I’m grateful that we have such a good role model. But what they did is change the experience — we’re changing the product.”

Pellerito agrees. “There’s a fashion side, but there’s also a function side,” he says. “We’re a glasses-wearers glasses company.”