There are some scary ones, some pretty shitty ones and several Blumhouse Productions from Amazon Prime's October "Welcome to the Blumhouse" series

Photo: Bleecker Street Media
Jack and Su, from left, aren't sure what to make of the furry little footstool that's invaded their cabin (and also the Earth)

Hooray for October, the wickedest of months.

Yes, it’s true that 2020 has thrust us all into a world that’s scarier in real life than any unstoppable killer from a classic 1980s slasher. Despite our strange new existence that’s fraught with more peril than inching through the dark to investigate a strange noise, we have to persevere.

If you’re like me, then your safe harbor in the storm is cinema.

And throughout October, BVB: Blood Violence and Babes is going to keep you informed about all the new horror, science-fiction and potential cult-classic flicks debuting each week.

Save Yourselves! is a hysterical riff on the first contact/alien invasion genre that places its extraterrestrial antagonists — which look like “tiny, furry footstools” according to Jack (John Reynolds) — firmly in the backseat. Jack and his girlfriend Su (Sunita Mani) are prototypical New York millennials. They spend their nights hardwired to electronic devices, whether a laptop or their phones, constantly checking emails and updating their status. When they decide to completely unplug for a week, and retreat to a friend’s remote cabin upstate, little do they know that cruel karma is about to send a blitzkrieg of space tribbles to ransack Earth. Save Yourselves! takes meta to a whole new level by shining a bright, uncomfortable light on our growing reliance and addiction to technology, but it also unspools a sweet love story and allows Jack and Su to discover a level of resourcefulness they never knew they possessed.

Photo: Gate 67 Films
Meet Audrey. Audrey is a witch. And she's about to curse an entire village. Hooray!

The Curse of Audrey Earnshaw

Fresh off a festival run, including the 2020 Fantasia International Film Festival, writer-director Thomas Robert Lee’s period thriller, The Curse of Audrey Earnshaw, is a dour rumination on the tragic consequences that accompany ignorance and fear. Fans enthralled by Robert Egger’s The Witch will find many similarities here. Both films use witchcraft as a means to explore the extreme beliefs of uneducated, close-minded communities. The Curse of Audrey Earnshaw lacks the visceral imagery, the chilling twists and the masterful storytelling that Eggers brought to play, but it still leaves an imprint.

Photo: Shout! Studios
Beware what you can, and especially can't, see in the eerily effective and ambitious Let's Scare Julie

Kudos to writer-director Jud Cremata for taking a huge swing and a risk with his first feature film. This slow-burn thriller, shot in one continuous take, focuses almost entirely on the origin of fear, the way an idea can induce severe dread that slowly creeps up through your chest to form a tightening knot in your throat. The idea at the core of Let’s Scare Julie is an urban legend about a neighborhood recluse that a group of young women decide to exploit in order to spook their friend, Emma. Cremata, to his credit, is steadfast in his decision not to show what’s happening next door. The lack of jump scares and gore may turn off some hardcore horror fans, but for people who love seeing an artist play with expectations and upend the conventional YA horror template, Let’s Scare Julie is a perfect late night in the dark delight. 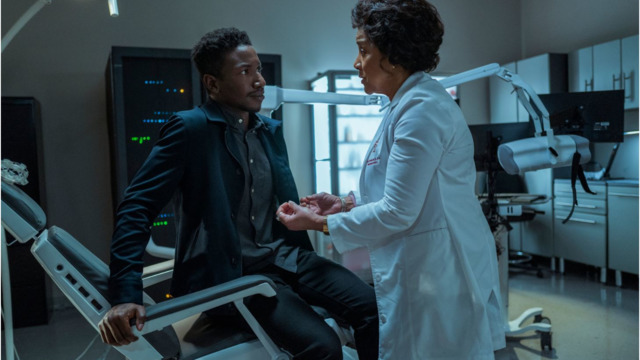 Trust me, I get it. You’re gun shy. I am, too. After Fantasy Island, Truth or Dare, You Should have Left and other recent disappointing releases, the shine has officially worn off of Blumhouse Productions. The home of The Purge and Get Out has taken some significant dings to its artistic credibility, even as the genre company moves firmly into a new entertainment vertical with the introduction of "Welcome to the Blumhouse," a spate of four original, made-for-TV movies debuting in October on Amazon Prime. The first release, Black Box, is a should-have-been fascinating deep dive into science fiction about a mad scientist hellbent on harnessing the brain to implant not just memories, but a human soul. If Black Box was intended to play like an extended episode of Black Mirror, it doesn’t work. Too many questions are left unanswered. And when two-thirds of your movie drags ass in search of a dramatic thrust, that’s a problem.

Photo: Amazon Prime/Blumhouse Productions
How much damage can one little lie cause? Jay, Kayla and Rebecca, from left, are about to find out

Thankfully, the second "Welcome to the Blumhouse" release, The Lie, is a significant improvement, and offers hope for the last two films, which release Oct. 13. The Lie also isn’t a traditional horror movie, but it expertly details the insidious ways that an innocent fib can become an unstoppable force of human devastation. Peter Sarsgaard and Mireille Enos play Jay and Rebecca, parents to Kayla (Joey King, Wish Upon), who claims to have intentionally killed her best friend, Britney. The Lie is taunt, unnerving and surprising.

Photo: RLJE Films/Shudder
That's Maria (Melora Walters) in the spotlight, using her religion (and coven) to wreak havoc in The Pale Door

If you’re a horror fiend like me, you subscribe to Fangoria, and that’s exactly where I first heard about director/co-writer Aaron B. Koontz’s The Pale Door. This horror-Western centering on two brothers, a family curse and a coven of witches has all the ingredients to be an instant cult classic. Instead, sadly, it feels wholly derivative, a Wild West redo of From Dusk Till Dawn, minus any of that classic’s ample gore, originality or subversive wit.

Photo: Shudder
Stop us if you've heard the one about the priest who walks into a fake exorcism, only to find a very real demon in The Cleansing Hour

Forty-seven years after the debut of The Exorcist, filmmakers are still trying to emulate the precision, terror and unnerving realness of William Friedkin’s classic. The Cleansing Hour starts strong, introducing viewers to Father Max (Ryan Guzman, 9-1-1), a self-proclaimed savior of the damned, who livestreams exorcisms online. The catch? The show is entirely staged with a film crew. You know where this is going. Max is about to meet a real demon face-to-face. His “faith” is about to be tested in a way he is not prepared for. And that in and of itself could have been a fun, fright-filled roller-coaster. But director Damien LeVeck takes a huge swerve late in the third-act, which introduces an even better idea that should been the focus of the entire film. Instead, just when The Cleansing Hour gets good, it ends.

Photo: Glass House Distribution
A knife in the tire is the least of Gail's worries in the taunt serial killer thriller, Souvenirs

Secrets, lies and murderabilia. Souvenirs, the debut feature from director Anna Mikami (Harley Quinn: Birds of Prey), tells the story of Gail (Isabella Pisacane), a young woman trapped by responsibility and left to care for her ailing grandmother, Margot (Jamie Donnelly), and the little shop of horrors where her grandmother sells macabre items culled from crime scenes and the homes of serial killers. Shortly after Gail finds a mysterious package packed with chachkies, she gets a phone call from a woman who claims the items belonged to victims of a killer that may or may not be Gail’s father. Souvenirs is a dark, delicious dive, and a perfect watch leading up to Halloween.

Photo: The Horror Collective
Oh look, it's just your normal, everyday band of possessed religious acolytes up to no good in Mass Hysteria

Horror comedies are a tough nut. They have to be both funny and scary, which is a difficult tightrope to navigate. Mass Hysteria has an excellent premise — a supernatural force consumes the iconic town of Salem, Massachusetts, on Halloween, pitting a ragtag group of witch trial re-enactment performers against a fanatical religious leader and his growing legion of minions. But when it comes to execution, Mass Hysteria missteps repeatedly. Jokes miss their mark. Scares never materialize. Yes, there’s gore and a few inspired sequences, but for a movie barely more than an hour long, Mass Hysteria is an interminable exercise in frustration.