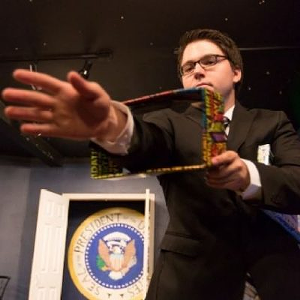 Provided by Cincinnati Fringe Festival
"The Origins of My Magic"

“Life has given me many trials, many knots.”

This line comes as Louisville, Ky.-based magician Cody Clark begins to slide off knots from a scarf that he has previously knotted. After removing three knots, Clark holds the scarf up, revealing three holes where the knots came from.

This scarf trick sums up Clark’s own process of dealing with many knots in his personal life, the biggest of which is that he is autistic. Instead of being stuck, Clark finds ways of slipping out of these trials in order to achieve his dreams.  Rather, he sees them as opportunities and is eager to find ways to overcome them.

Clark was a Cincinnati Fringe favorite four years ago with his show A Different Way of Thinking, in which he primarily discussed his formative years, his love of magic and improv and his ability to overcome seemingly insurmountable obstacles to become a stage magician.

In this show, Clark takes a slightly different approach, letting his combination of magic, self-confession and improv comedy come together to counter the popular stereotype of the slick magician who is out to look good at the expense of his audience.

In this autobiographical magic show, Clark reveals how he views magic as a form of expression, as well as a way of showing the audience his influences, which include television’s Mister Rogers, musician Dolly Parton and master magician Lance Burton. Cody deftly combines stories from his life as he performs various magical tricks to show the ways that each of these people had an influence on his magical development.

Halfway through the show, he confesses that he has motor skill issues that make it a challenge for him to do sleight of hand. But this does not deter him from attempting these tricks.  He successfully carried them off, with only a minor hiccup when discarding cards for one trick.

One of Clark’s strengths is in his ability to joke and improvise off what the audience gives him.  He has good comedic timing and I was surprised how much I laughed at what he was able to come up with throughout the show.

I have seen many young magicians at Fringe festivals and other venues who have conquered similar feats of magic, but Clark is memorable because of his authenticity and genuine likability.  He saves the artifice for his magic and is willing to reveal his true self, flaws and all, for his audience to see over the course of the show. Perhaps this is the biggest trick he pulls off.

In short, The Origins of My Magic is a feel-good show that will make you feel refreshed after seeing it. It is inspiring to see what Clark has made of his life — and how much he has matured as a performer since his last Cincy Fringe outing.

As a sidebar, Cody Clark has been friends with fellow Fringe performer Peter Michael Marino, who has an amazing kids show — Show Up, Kids! — that is also adult-friendly. Children in the audience help create the show by choosing props, scenery and costumes to be used.  I saw it immediately before Clark’s show; it was fun and worth seeing.