Zoinks! is a laugh-out-loud Fringe show immersed in a ghostly world full of teenage angst, warmth, adventure, meddling, and a stupid dog, too 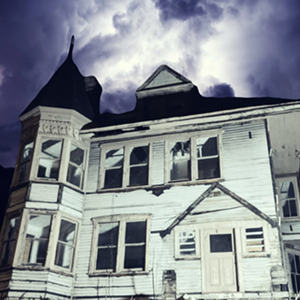 Queen City Flash's Zoinks is a hilarious romp of a parody that acts as an amalgamation of all the teen sleuth capers that came before it. And that's a subgenre I find a lot of comfort in; as a kid, Scooby Doo and The Mystery Gang were my absolute faves. Seriously. I devoured basically anything that had to do with those meddling kids. My mother raised me on Nancy Drew paperbacks, which laid the foundation for my lifelong love of the mystery genre as a whole.

Enter 14-year-old Nolan Blackwell (Jordan Trovillion), teen sleuth detective, and her dog, Casper (Trey Tatum). The pair are completely at home with their underage, mystery-solving counterparts. Staged at the Art Academy of Cincinnati, it opened to a packed house. Together, Trovillion and Tatum (who holds up a paper mache dog head when speaking as Casper) were dynamic, utilizing the small space and sparse design wholly. At times, they weaved through the crowd, flicking a flashlight to designate lines to be read aloud by audience members; it was as if we were all in on the telling of some wicked campfire tale.

We watched them sneak into a creaky, abandoned house filled to the brim with strange (haunted?!) items. Through rich narration spiked with vivid imagery, this space was easy to visualize despite there only being an opaque screen — which changed colors based on setting and mood — and occasional props, like a coffin lid, flickering lamp and a dusty framed portrait. Credit should also go to Taylor Hauter, the lighting designer and stage manager, for breathing life into the stage. It's clear that director Bridget Leak, along with playwright Tatum, are masters at storytelling. They rode the balance between absurdity and warm sentimentalism with absolute precision.

The humor often dipped into the absurd and left the crowd howling. Beyond the campy whodunit tale emerged another storyline: The love between Nolan and Casper, who both found each other in times of peril. Their relationship is the primary focus of this production, whatever mystery is at hand is secondary. Throughout, we are given slices of their backstories — which never feels like an info dump — such as Nolan's absent mother, who is addicted to pills, and pestering aunt, who only wants the best for her (even if Nolan doesn't see it that way).

Their energy kept me on my toes, as did the element of improvisation that was threaded throughout the production. Including the audience in the show makes for unpredictable, but often very funny, moments.

Despite this, sometimes the fast-paced action and witticisms made the plot itself hard to follow. Because this production fits snugly into the teen caper formula, that didn't prove to be much of a detraction.

Zoinks! is a laugh-out-loud Fringe show immersed in a ghostly world full of teenage angst, warmth, adventure, meddling, and a stupid dog, too.  It deserves to be unmasked.