"Puppets Should Speak" is a low brow, silly show that follows a woman and her ventriloquist dummy boyfriend. 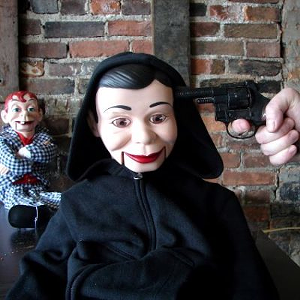 In Puppets Should Speak Amanda has a problem with her boyfriend Alex, a ventriloquist dummy who has been giving her the silent treatment as of late, despite her attempts to connect with him on a deeper emotional level.

Doctor Fine, Amanda’s hard-drinking therapist whose methods are erratic at best and deadly at worst, seems to have even more problems than his own patient. His advice is a scattershot mixture of wisdom and lunacy.

The show — written by Kevin Holliday of Indiana-based Schedule C Productions — does not take itself very seriously, so tight-waisted fans of mature dramatic theater (the kind with a capital "T") may not be amused with its flippant jokes and farcical nihilistic outlook. That being said, it does manage to address important issues faced by anyone who has ever been in love. This strange play delivers some laugh-out-loud moments and an equal amount of groan-inducing cliches, all in a frantic and playful tone that borders dangerously close to schlock. As the story progresses, several instances of sincerity are uncovered, including the truth that healthy relationships are based on openness and communication. But, overall, this is a low brow comedy that is really just hustling for a few cheap laughs. Given the general silliness of its plot, it seems appropriate that the show culminates in a bloody disco shootout.

As Amanda’s relationship with Alex deteriorates alongside the audience’s sanity, Dr. Fine’s credentials as a licensed therapist come further and further into question. Swipe right if you’re thirsty for a scandalous puppet/person sex scene, but steer clear if you’re looking for something intellectually stimulating beyond a ninth-grade reading level.

At best, the show proves how cruel silence can be to someone who loves you, so if you care about your partner, be sure to speak up. It may not be blind or deaf, but Puppets Should Speak is intentionally dumb.