FRINGE 2021 REVIEW: An Evening with Gwendolyn

In this one-woman show, Eileen Earnest becomes Gwendolyn Crosley, your dazzling and vivacious hostess and wife of Powel Crosley, the 1920s-era radio and automobile magnate who once owned the Cincinnati Reds. 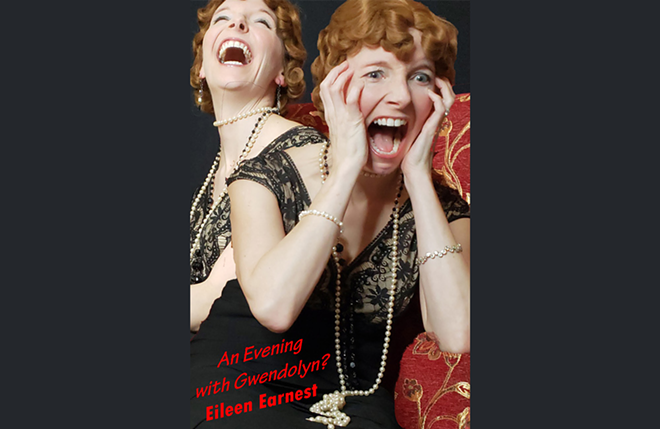 Photo: Provided by Cincy Fringe
Poster for "An Evening with Gwendolyn"

Welcome, welcome! Gwendolyn Crosley is so glad you could make it to her dinner party. I’m sure, since you’re one of the lucky few to have been invited, that you know Gwendolyn well. If not, you might be more familiar with her husband, Powel Crosley, the 1920s-era radio and automobile magnate who once owned the Cincinnati Reds.

In this one-woman show, Eileen Earnest becomes Gwendolyn Crosley, your dazzling and vivacious hostess … but that won’t be Earnest’s final transformation for the night. It seems Gwendolyn recently attended a seance with her girlfriends, and she just might have brought a paranormal stowaway home with her. Following a charming recitation of Edgar Allan Poe’s “The Raven,” Gwendolyn slumps in her chair and Earnest becomes another woman entirely, perhaps Sarah Royster, the first love of Poe’s life, who uses Gwendolyn as a vehicle through which to tell the tale of her wicked crimes.

The story that Royster tells is Poe’s “The Tell-Tale Heart,” although it is presented as if it were the ghost’s own story. An Evening with Gwendolyn is described as an adaptation of this classic Poe story, and I suppose in a way it is, since the tale has been placed in another’s mouth. However, besides some lively banter from the hostess at the top of the show, An Evening with Gwendolyn is essentially a monologue showcase for Earnest, who recites both Poe masterworks in their entirety (and seemingly without any cuts in the video, which is no small feat).

You’re in good hands with Earnest, whose no-holds-barred approach keeps the play energized. There was room in this concept to further adapt Poe’s stories, especially with two female characters being given the reins over this male-authored and male-voiced material, but as it stands, An Evening with Gwendolyn is a funny, spooky, and well-acted recitation of two classics that are always worth another read.